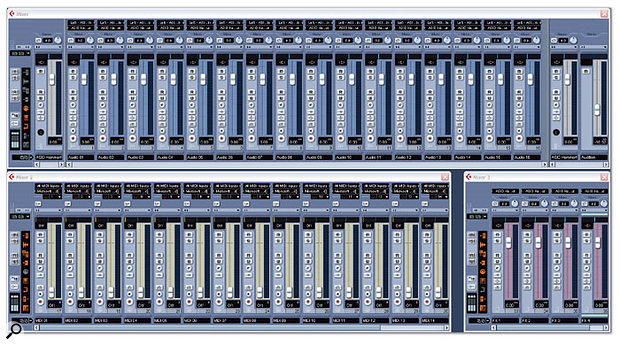 In Cubase SX 3 you can open and configure three separate Mixer windows. In the example above, one Mixer shows MIDI channels, another shows audio, input and output channels, and the third window displays FX channels.

Returning to Cubase 's Mixer window again this month, we take a look at some ways to make it more manageable when working with Projects containing a large number of channels.

Once you start working with large Projects — which is to say, Projects with a large number of channels — you'll find that it can become quite difficult keeping track (no pun intended) of them on the Mixer. To help make life easier, Cubase allows you to do two things: firstly, you can open a second or third Mixer window simultaneously from the Devices menu, to look at different parts of what is the same mixer. Secondly, you can customise either Mixer window to show only what you need to see at a given moment.

To make things easier, you can configure the Mixer to display only the channel types you require, using the Hide Channel buttons in the Common Panel. This can be useful if, for example, all of your MIDI channels are playing through VST Instruments and you only need to see the channel strips for the VST Instruments during mixing. Enabling the Hide MIDI Channels button (Hide Channel buttons glow orange when enabled) hides all the MIDI channels on the Mixer.

In addition to hiding and showing channels of different types, you can also set up a user-definable hide-and-show group across different channels of any type. Click the Channel View pop-up menu for a channel you'd like to assign to the hide-and-show group, and make sure the 'Can Hide' item is ticked — click to tick if it isn't already. After doing this you can hide and show the channels you assigned as 'Can Hide' by toggling the 'Hide Channels Set To 'Can Hide'' button. That's the lowest icon in the set of Hide Channel buttons.

When you're working with a group of linked channels, it's still possible to make changes to individual parameters without having to first unlink the channels. Simply hold down the Alt/Option key as you adjust the parameter.

Although it's possible to have multiple groups of linked channels in the Mixer, it's worth remembering that a channel can only belong to one linked group. While you don't have to unlink a channel before you include it in another group, bear in mind that a channel will no longer be part of the linked group it previously belonged to once it's been reassigned. The original group will remain otherwise intact, however.

A Channel With A View

Being able to configure what you see in the Mixer is, of course, very useful; but continually reconfiguring the Mixer to see different sets of channels can be rather tedious. To overcome this, you can create what Cubase term Channel View Sets, taking a snapshot of the current Mixer configuration that's saved with the Project and can be recalled at any point. 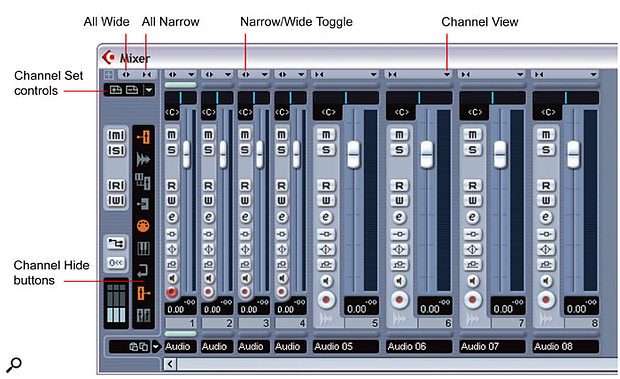 When the Mixer has been set up to display a certain configuration you'd like to be able to get back easily at a later date, click the 'Store View Set' button (located at the top left of the Common Panel in the lowest section of the Mixer), enter a name in the politely-titled 'Type In Preset View' window and click OK or press Return. You can now recall this Mixer configuration at any time by clicking the 'Select Channel View Set' button and selecting the configuration from the pop-up.

One way to identify all the channels on the Mixer is simply to display more channels. For those who can't justify a bigger monitor, Cubase offers two different widths for displaying each channel strip: narrow and wide. Wide is the usual setting. Although the narrow view limits the number of parameters visible for each channel, it's a useful way of cramming more level faders and meters on to the screen when you're concentrating on balancing levels, for example.

To view a channel as either wide or narrow, click the Narrow/Wide toggle button above that channel (the button is located just above the selection strip, which is above the Channel's pan control). Alternatively, to view all the channels on the Mixer as wide or narrow, click either the 'All Wide' or 'All Narrow' button at the top of the Common Panel to the far left of the Mixer. If you have the input or output channels visible on the Mixer, you'll notice that clicking the 'All Wide' or 'All Narrow' buttons makes no difference to input or output channels. To include these channels in the 'All' operation, Alt/Option-click the buttons instead.

When you're working on large and complicated mixes involving many channels, making manual adjustments to faders individually can become impractical. A common approach to large mixes is to get the balance right within specific sections, such as the balance of a drum kit or string section, and then start mixing these sections together. Since you want to be able to adjust the volume of a section in one go, rather than having to go along and move each fader for the section individually, Cubase provides two options. One way in which you can group channels on the Mixer is to link them together. Wouldn't it be great if you could move one of the faders for an audio channel containing part of the drum kit, and have the faders for the other audio channels containing the drum kit adjusted proportionally? This is exactly the kind of thing you can do by linking channels on the Mixer.

It isn't only faders that are linked when you link channels together; other parameters are too, including the Mute, Solo, Monitor and Record Enable buttons. To unlink a group of channels, select one of the channels in the group you want to unlink and all the others should become selected too. Now right-click in an empty part of the Mixer and select Unlink Channels from the pop-up menu. Unlinking any channel that's part of a group will unlink all channels in that group since it's not possible to unlink one channel and keep the rest of the linked group intact.

Linking channels can be a useful way of handling the mix in sections, but there's another useful technique for audio-based channels (which can be used in addition to linking channels, incidentally): sub-mix them through Group channels. For example, you could route the individual audio outputs of the channels containing drum-kit sounds to a Group channel, which would enable you to treat the output of the drum kit as a single stereo channel with one fader. It would then be easy to, for example, use a plug-in as an insert effect (a compressor, for example), across the entire output of the drum kit.

The Groups/FX page in the VST Connections window provides another way of configuring Mixer Group channels.

And that's basically all there is to it — channels routed to a Group channel are processed through the latter before being sent to the Master channel, or indeed another Group channel. You can use Group channels to create sub-mixes of sections such as drum kits, keyboards, and so on, allowing the final mix to be carried out by mixing a few stereo audio channels.