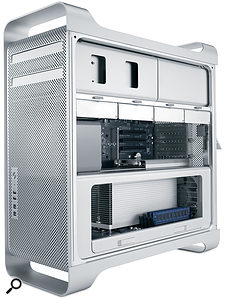 The new Mac Pro looks the same on the outside, but has been modified internally to accommodate the new processor architecture. The lower part of the case features a removable board containing the processor and memory slots, making it more convenient to add extra memory.Photo: Apple

It might sound wrong to be excited by a processor, but if there's a processor worthy of such excitement it would be the new 5500‑series Intel Xeon. Based on the new Nehalem micro‑architecture (discussed in February's Apple Notes), the 5500‑series Xeons represent a considerable step forward in terms of performance, even when compared with the 5400‑series Xeons that shipped in last year's Mac Pro; and this new processor is the foundation for the latest Mac Pro incarnation unveiled this month.

Unlike the dual‑processor Mac Pro, which supports a maximum of 32GB memory, the single‑processor model only supports up to 8GB. And although this might not seem like a big limitation right now, it's worth remembering that, as music and audio software begins to take advantage of 64‑bit memory addressing, purchasing a new Mac now with an 8GB memory limit could be a decision you later regret, especially after the release of Snow Leopard, the next major version of OS X.

Apple claim that the new Mac Pro is almost twice as fast as the previous generation, and although no audio‑centric performance benchmarks have been published on the company's web site, it seems clear that the architectural benefits of the new Mac Pro will yield good results for music and audio software. One major factor is that the memory controller is now integrated into the actual processor, meaning that the processor now accesses memory directly from its own on‑chip memory controller instead of communicating with a separate controller chip. Overall, Apple claim that memory latency is reduced by up to 40 percent in the new systems, and that memory bandwidth has more than doubled from last year's Mac Pro. Such improvements should have a big impact on memory‑intensive audio applications, especially software samplers.

We'll be carrying out extensive performance tests on the new Mac Pro and reporting back to you, as soon as we can get our hands on one.

Alongside the revised Mac Pro, Apple also updated the iMac and Mac Mini product lines, although the changes were less radical than those for the Mac Pro, with both models continuing to use the Core 2 processor. While you might be wondering why Apple didn't opt for the more powerful Core i7 processor, especially in the iMac, a very probable reason for this is likely to do with cooling and power requirements. The Core i7 has a higher Thermal Design Power than the Core 2, requiring a more powerful cooling system, which could be one problem; and since the iMac and Mac Mini systems usually incorporate the same technology Apple use in laptops, we're unlikely to see Nehalem‑based iMacs and Mac Minis (and Macbooks, Pros and Airs) until Intel release a Nehalem‑based processor for the laptop market.

One aspect of the iMac and Mac Mini's architecture that has been changed, though, is the graphics hardware. The low‑end 20‑inch and 24‑inch iMacs and the Mac Mini now use the same Nvidia GeForce 9400M integrated graphics hardware as the Macbook, sharing up to 256MB of the main memory for video. Meanwhile, the high‑end 24‑inch iMac models feature either Nvidia's GeForce GT120 graphics hardware with 256MB of dedicated video memory or the GT130 with 512MB. For those requiring even more graphics performance, these iMac models can also be equipped with an ATI Radeon HD 4850 (with 512MB memory) for an additional £40$50.

Following on from the new Macbook and Macbook Pro models last year, the Mac Pro, iMac and Mac Mini are the latest casualties in Apple's crusade to rid their product line of Firewire 400 ports. But, on the plus side, all models — including the iMac and Mac Mini — offer Firewire 800 instead. The Mac Pro now has four 800 ports (two on the back and two on the front), while the iMac and Mac Mini both feature one port. Other than the inconvenience of needing to purchase some Firewire 400‑to‑800 cables, this probably isn't going to be a big deal for musicians purchasing new machines.

Another cable you might need if you buy a new desktop Mac is a Mini DisplayPort adaptor, since, as with Apple's portable Macs, all desktop Macs now also incorporate a Mini DisplayPort for connecting displays. The graphics card on the Mac Pro actually features both dual‑link DVI and Mini DisplayPort connectors, meaning that you'll only need to purchase an adaptor if you plan on using a second display, although the cost of that adaptor could be as much as £68$99 if you need to connect a second 30‑inch display. For Mac Minis, however, Apple do at least provide a Mini‑DisplayPort‑to‑DVI adaptor in the box, to get you started.

The Mini DisplayPort issue is of less concern for iMac users, since there is, of course, a built‑in display; and Apple have made the 24‑inch model more affordable by dropping its price to £1199$1499. This model features a 2.66GHz Core 2 Duo processor with integrated graphics hardware, 4GB memory, and a 640GB hard drive.

A slightly curious omission on the new iMac models is the numeric keypad. Apple introduced a new keyboard with the latest iMacs that does away with this group of keys, just like the current Bluetooth keyboard, and this is obviously a pain in the proverbial if you plan on using your iMac for music software. With so many applications employing the numeric keypad for essential shortcuts, you may need to add a new keyboard to your shopping list when purchasing a new iMac.

Apple have made some necessary improvements to their desktop line‑up, and musicians and audio engineers should be pretty pleased with Apple being the first to offer dual‑processor, Nehalem‑based systems. The iMac and Mac Mini updates are welcome, but are perhaps less significant by comparison, and one could argue that the iMac is starting to seem expensive when compared to competition in the Windows world. That said, the iMac is still a powerful machine for musicians who don't have the budget for a Mac Pro, and the user experience and performance are both superior when compared to competing systems offering a similar aesthetic.

A completely revised desktop line‑up wasn't the only new product news from Apple this month, as the company also announced a beta version of Safari 4, a new iPod Shuffle, and an updated version 3.0 operating system for the iPhone and iPod Touch.

I know one is supposed to use Firefox to be included in the ranks of savvy technologists, but I've always quite liked Safari, and Safari 4 brings improvements in both performance and usability to Apple's browser. Some of the highlights include a new interface for tabbed browsing, where the tabs now appear in the title bar of the window, which makes more sense from a logical perspective, in that each tab now has its own address bar, and also saves some screen real‑estate, giving you more space for the page you're reading. JavaScript performance has been significantly improved, making Safari much snappier when running browser‑based applications like Mobile Me; and you now have the ability to see previews of your browsing history and search for text within pages you've previously visited.

The Safari 4 beta can be downloaded from Apple's web site, and versions for both Leopard and Tiger are available.

Apple are often parodied for their quest to simplify and shrink the company's products. Who can forget such YouTube gems as the Macbook Wheel or iPod Flea? But if ever there was proof of the idiom 'never a truer word spoken in jest', it would be the new iPod Shuffle: not only is it unbelievably tiny, it also doesn't actually have any buttons. Well, that's not true, it does have a switch that sets whether the device is off or if it plays songs in order or in shuffle mode; but the actual transport and volume controls are to be found only on the included headset, meaning that you can't usefully operate the iPod Shuffle with non‑Apple headphones (or Apple headphones that don't have the Remote feature).

Using the Remote with the iPod Shuffle is similar to the behaviour introduced for the iPhone and iPod Touch last year: one button‑press for play and pause, a double button‑press for the next song, and a triple press for the previous one. But the iPod Shuffle takes this further, as iTunes will now encode audible announcements of the song and playlist names, so you can find out the name of a song by pressing and holding the button, and navigate playlists by pressing and holding the button until you hear a tone. The new iPod Shuffle is available now in silver or black, and offers a 4GB capacity for £59$79.

Last but not least, at a special event held on Apple's campus this month, the company previewed OS 3.0 for the iPhone and iPod Touch, featuring the highly‑anticipated cut‑copy‑paste functionality, along with a significant amount of new technology for third‑party developers to embrace. One particularly interesting feature is that it will now be possible to purchase additional content or functionality for an application within the application itself.

For example, rather than a developer providing multiple versions of the same application with different content, such as iDrum, which is available in Hip‑Hop, Club, Ministry of Sound, and Rock editions, a developer could now offer one version of the application and allow the user to buy additional content. As with application purchases, the new 'In App Purchase' feature is handled through the iTunes Store, making it, once again, easy for developers and end‑users alike.

The new OS 3.0 update will be available in the summer, and existing iPhone or iPhone 3G owners will be able to download it for free, with a $9.95 charge for iPod Touch users.