As Apple's recent Panther operating system upgrade is adopted by the Mac community, the usual problems that accompany such a major change begin to surface. We take a closer look at the issues worth considering before making the jump to Panther, and report on Apple's new iBook G4.

Although I promised last month to be looking at Power Mac G5s in this particular column, Editor-in-Chief Paul White beat me to writing about the subject with his review in this very issue. So instead I thought I'd continue where I left off last issue, looking at Panther, and specifically discussing some of the problems people are having with various music and audio applications, which, unfortunately, I couldn't comment on when we went to press last month. Before I continue, though, it's worth mentioning that the first minor update to Panther (10.3.1) is already available through Software Update, and it fixes many of the initial teething problems experienced in 10.3. 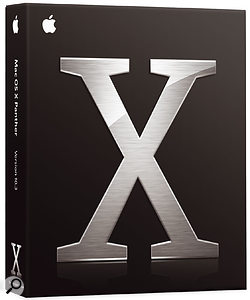 Where did all the compatibility go? Panther's new features may improve the experience of using your Mac, but many applications are still experiencing some early support issues as developers release new versions of their software.Nuendo and Cubase SX both suffer from a particularly annoying problem in Panther, wherein various user-interface controls can disappear at inopportune moments, leaving you to fumble around, clicking random parts of the screen, in an effort to force certain buttons to manually redraw. To see the issue from Steinberg's perspective, the cause seems to be certain graphics functions that have either changed or contain bugs in Panther, although since this has actually been a problem since the early developer builds of 10.3, it seems a shame Steinberg couldn't find a workaround.

Apple are apparently going to be fixing the problem, which seems, rather confusingly, to manifest itself in different ways on different machines, so I was anxious as to whether the 10.3.1 update improved the situation. However, even after I upgraded to 10.3.1, the 17-inch Powerbook I was using still had problems redrawing the Track List and Inspector, although it didn't seem to happen quite so often. Even more annoying, later that day, I was talking to a friend who seemed to be looking suspiciously happy, and it transpired that his Power Mac G4 no longer had Nuendo redraw issues under 10.3.1. The mystery continues...

Digidesign took their time moving Pro Tools to the OS X platform, and now their users are again having to wait before upgrading to Panther, as the Pro Tools software itself is currently incompatible with 10.3. Fortunately, Digidesign promise that a Panther-compatible version will be available by the middle of November (so it should certainly be out as you read this).

Digital Performer users should upgrade to version 4.11 for Panther compatibility, and MOTU are also offering a selection of driver updates for users of their Firewire, PCI and USB audio and MIDI interfaces. The previous versions of the drivers are incompatible with 10.3, although the newer versions offer full support for the improved input and output audio port naming in 10.3, along with control surface support for MOTU's own Cuemix DSP latency-free monitoring tool.

On the software instruments and effects front, I haven't come across any incompatible Audio Units or VST plug-ins at the time of writing, although committing that to the printed page is an almost sure-fire guarantee that such a plug-in exists. The only possible causes for concern are the machine-specific authorisations used by many instrument and effects developers, such as Native Instruments, who offer some guidelines on their web site at www.native-instruments.com.

If you're upgrading to Panther from a previous version of OS X, such as Jaguar, it perhaps goes without saying that choosing any install option other than 'upgrade' ('clean install' or 'archive and install') will require your plug-ins to be reauthorised. But the point is that your previous response codes, such as those given by the registration process used by Native Instrument's products, will no longer work because your system will have a new ID number once Panther has been installed.

While 'upgrade' is the most convenient install method for putting Panther on your Mac, it's often not the best choice in the long term. I often have my suspicions about how well the migration process really works, so I opted to bite the bullet and perform a clean reinstall after the original Jaguar-to-Panther upgrade on my 17-inch Powerbook. I have to admit that this was mainly out of curiosity and superstition, since the original migration did work as expected, and my aforementioned Power Mac G4-owning friend also migrated without a problem. However, another friend upgraded their second-generation 12-inch Powerbook only to find every single application they tried to run afterwards crashed during launch, forcing a complete reinstall in any case. Hopefully this isn't too common an occurrence.

Despite the incompatibility issues some existing applications are having — and not just in the audio and music worlds — most developers seem to be responding fairly quickly, with Panther-compatible versions of their products available for download from the appropriate web sites. And aside from the problems, I don't think I've spoken to one Mac user who would want to go back to Jaguar again, just because of the way the whole system becomes more responsive with Panther. Next month: the pros and cons of journaling for audio in Panther — and if you're not sure what journaling is, other than perhaps a synonym for blogging, this is a column you won't want to miss.

I have to confess that part of me is glad the year 2003 is nearly over — for one thing, I'm bored with writing the phrase 'year of the notebook' every time Apple make an announcement concerning their portable line-up. However, to be fair to the company, Apple have at least lived up to the implied promise, with the recently announced iBook G4s completing the 'year of the notebook' makeover. All things considered, three new Powerbook models, including two revisions, and two new iBook models isn't bad in the space of a year — and that's before you take into account iPods, iTunes, Power Macs and Panther. 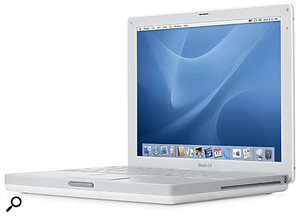 With a G4 processor and the promise of up to six hours of battery life, Apple's new £849 12-inch iBook G4 looks like an irresistible purchase for Mac musicians seeking an affordable mobile solution.The new iBooks were quietly announced on Apple's web site on 22nd October, a day before the release of Panther, and I have to confess that the specifications on offer for the asking price immediately had me thinking about whether I'd reached the limit on my credit card for that month. I used one of the later G3-equipped iBook models as my main personal-use machine for some time, and I loved the 12-inch form factor, along with the fact the battery life was reasonable and the casing didn't get too hot. So I was very interested in checking out the iBook G4, and while I haven't managed to get my hands on one just yet, I did pop down to the local Apple Store to check it out.

My first impression was that it looked noticeably whiter than the previous G3 iBooks, and playing around with the model on show revealed a much snappier system than the iBook I was used to. And so it should be, of course: the 12-inch iBook features an 800MHz G4 processor with a 256k level 2 cache and a 133MHz system buss. Fourteen-inch models are also available, offering 933MHz and 1GHz chips. For no other reason than aesthetics, I still prefer the 12-inch model, especially since all the displays have a 1024x786 resolution regardless of their size, although a 14-inch portable with a 1GHz processor undoubtedly fills an interesting spot in Apple's line-up.

All models feature a slot-loading combo drive, ATI Mobility Radeon 9200 graphics with 32MB video memory, two USB 2.0 ports, a Firewire 400 connection, support for external video mirroring, a headphone output, a 56k modem, and 10/100 Ethernet. They are also Airport Extreme ready, and can have an optional internal Bluetooth module fitted if you order from the Apple Store. The three machines have 30, 40 and 60GB Ultra ATA drives respectively, and come with 256MB PC2100 DDR RAM, although Apple supply this as 128MB on the motherboard, with a further 128MB in the SO-DIMM slot that would have to be discarded when you wanted to upgrade the memory. And speaking of memory upgrades, while Apple claim the iBook G4 can be expanded to a maximum of 640MB, Transintl (www.transintl.com) offer a 1GB upgrade chip to take your system to 1152MB for $449.

At six hours, the iBook G4 has the privilege of the longest theoretical maximum battery life of any portable ever manufactured by Apple, and from this I think we can probably expect a more realistic figure of maybe five hours if you're being really economical (low brightness, disk activity, and so on) to maybe three hours if you're not. Either way, the six-hour figure offers a great deal of hope, and should enable the iBook G4 to compete with some of the more typical Centrino laptops available in the Windows world.