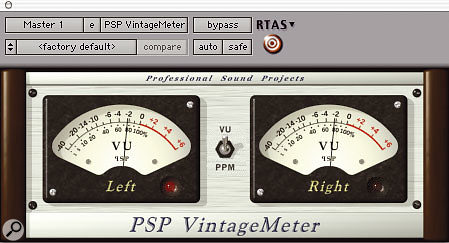 We've rounded up some free effects and other goodies. On the news front, there's word of a VST-to-RTAS plug-in converter from FXpansion.

This month I've been trawling around to find free plug-ins that work directly with Pro Tools. Originally I expected to begin the column bemoaning the fact that users of other music software have all the fun, with so many more freebies available for the VST and Audio Unit formats. However, things are about to get shaken up by the release of FXpansion's VST to RTAS Adapter for Mac OS X and Windows. See the separate box for more info, and seriously think about treating yourself to this ingenious utility for Christmas (and spending the holidays downloading all those free VST goodies!).

The plug-ins listed below will work on any type of Pro Tools system, LE or TDM, but some are limited to certain OS platforms. And please let us know if you find any more, or have developed a Pro Tools add-on yourself.

Vintage Meter (shown above) emulates a classic analogue VU meter, complete with moving needle graphics. Clicking on the scale switches between two measurement ranges, and clicking on the plug-in's name flips the display to the 'back panel'. A number of parameters here allow detailed control of the meter's response, so anyone coming from an analogue console should be able to set themselves up with something they're familiar with. By default the settings are in strict accord with the standards set down for a professional VU meter. The nominal 0dB level can be varied from -24 to 0 dBFS (the loudest Pro Tools can get), making the meter a useful aid for controlling the average level of a mix in various formats from pop music to feature films. 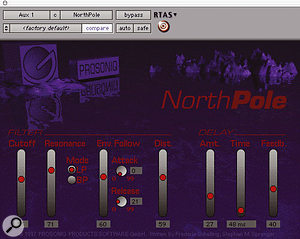 The North Pole resonant filter combines a switchable low-pass/band-pass envelope-following filter with distortion and a ping-pong delay. This plug-in has been around for a long time and it's not the sweetest-sounding filter, but it can really liven up synth lines and there's no excuse not to have it!

This is a fully functioning version of IK Multimedia's soft synth that's able to play back a selection of sample patches (provided separately on the web site and updated monthly). There are currently 20 patches with sample sets covering a range of instruments, pads, loops, a drum kit, and more. 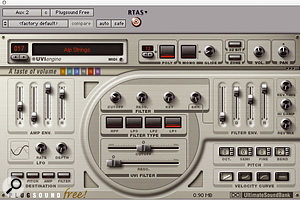 Similar to the Sampletank package, this is a fully working version of the sample player that's provided with the Universal Sound Bank libraries. Again, its primary purpose is to act as a taster for the full libraries, but it's still another sound module to add to your armoury. Unlike Sampletank Free, this plug-in comes with all the sounds combined, making for a large (70MB) download. I found that under OS X the Custom install for 'RTAS only' didn't work. Choosing 'Easy Install' worked, although it means you get the other format versions as well. Twenty-nine patches are available, including Rhodes, pianos, synths and drums.

We looked at Pluggo in Pro Tools Notes in March 2003, but this is still the best way to get free plug-ins in Pro Tools. The big drawback is that it's still only available on the Mac and hasn't even made it to OS X. The good news is that it works in Pro Tools Free, so if you've got an old Mac lying about it's cool to have it available for chucking loops and stuff over for some serious 'weirding up'. The Pluggo Runtime RTAS plug-in is a shell that allows plug-ins developed in Cycling 74's MAX/MSP suite to be used in Pro Tools. Once you have it installed you can download free plug-ins developed by third parties, such as the next three listings. 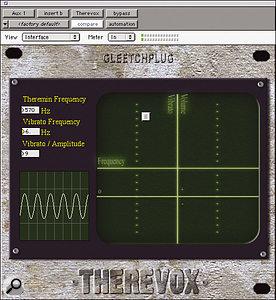 This large collection of plug-ins for Pluggo is great for weird sound design stuff.

Four classy plug-ins worth rebooting in OS 9 for if you've got a Mac that can do so. Sonic Reducer can do lo-fi sample-rate and bit reduction as well as anything you might pay for. Malestrom (sic) is a two-input ring mod and convolver which is amazing for sound design (I almost want to keep it secret!), and finally there's a brilliant mouse-controlled Theremin called Therevox. 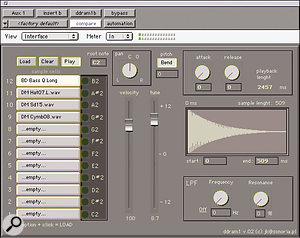 This is a surprisingly sophisticated 12-part drum machine instrument. Samples can be loaded into the separate pads, then manipulated with reference to a small waveform display (like the pro Kontakt and RMIV). Each sound has its own envelope, filter and start/end time controls!

Cycling 74's software is being ported over to OS X already, and hopefully the Pluggo Runtime RTAS code will be converted soon. Additionally, many of the free Pluggo plug-ins are also downloadable as VST versions, so hopefully the FXpansion adaptor will make most of these gems available to Windows-based Pro Tools users.

What's the most annoying feature of the music software world? Plug-in incompatibility between different platforms must be a leading candidate, and if Pro Tools supported the VST standard you'd have access to so many free plug-ins it wouldn't be possible to list them here.

London-based software developers FXpansion have been working steadily to make a mockery of this continuing bugbear by releasing too-good-to-be-true utilities for converting between formats. So far they've produced VST-to-Audio Units and VST-to-Direct X adaptors, both of which bring a large number of VST plug-ins to AU- and DX-based software studios.

On October 17th, the company announced that they were only about a month away from releasing a VST-to-RTAS converter for Pro Tools. This is not going to be a stand-alone wrapper like we've seen before in OS 9; this will be a solid professional product that makes VST plug-ins look like RTAS ones to the host applications. VST Instruments and effects will open up in Pro Tools as if they were directly compatible. Look out for an SOS review of all the adaptors as soon as the new one appears. Pricing has so far been stated as $99.

In addition to last month's G5 info, Digidesign have announced they're intention to start phasing in Pro Tools versions that support the major new OS X version 10.3 'Panther' release. The new OS brings with it some relevant improvements for Pro Tools users over and above 10.3's sexy window management innovations. Everyone will be pleased to learn that Pro Tools should become graphically faster for a start. Apple's Audio MIDI Setup sees the return of OMS-style IAC busses, which will provide built-in support for sending and receiving MIDI between applications. Finally, Pro Tools's many SCSI drive users should see improvements in OS X's notoriously flaky support for this storage technology.