Spice Up Your Keyboard Chords By Bobby Cole

Bored of the same old chord sequences? In this short series, we explore some simple ways to spice up your piano chords.

No matter what genre you work in, learning to play basic chords on the piano/keyboard is a great way to accompany yourself and write new tracks. With a limited repertoire of chords, though, creating new parts can often seem difficult. It’s so easy to get stuck in a rut and compose something that sounds just like your last piece. This is where ‘passing’ chords can come into play: learn a few of these and you can breathe new life into your chord sequences. 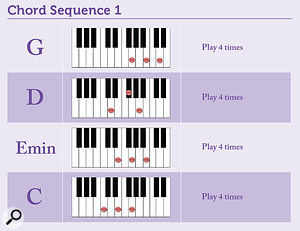 Before I go any further, I want to assure you that this article is not going to be ‘theory’-heavy. I am going to focus on practical and easy tips for spicing up your compositions. This article also assumes that you already have a basic knowledge of simple major and minor chords. You don’t have to know every single chord in the book, but an understanding of the basic major and minor shapes is needed before you go any further.

So what exactly is a passing chord? A passing chord is something that’s not part of the fundamental chord sequence, but helps you move from one chord to the next. Generally, passing chords are played quite briefly, rather than being sustained for a whole bar. Think of a passing chord like a bridge over a river, or eight pints of beer... both, in their own way, get you from one place to somewhere else. More specifically, I like to think of passing chords as a means of getting me to a particular place — so, I have passing chords that I know will move me to the chord of Em, for example. Try to think of them in this way. There are literally hundreds of combinations of passing chords, and as I discover them, I write them all down to keep track of what works.

Let’s begin with an easy example, and take the old classic chord sequence G | D | Em | C, which has been used in thousands of songs. To play this sequence, check out the diagram below, showing you which notes to play:

Popular tunes that use this chord sequence include ‘Don’t Stop Believing’ (Journey), ‘Beautiful’ (James Blunt), ‘Can You Feel The Love Tonight’ (The Lion King), ‘Paparazzi’ (Lady Ga Ga), ‘With Or Without You’ (U2), and ‘She Will Be Loved’ (Maroon 5), and the list goes on. Check out Axis Of Awesome’s comedy track ‘4 Chord Song’ on YouTube and you’ll see what I mean. 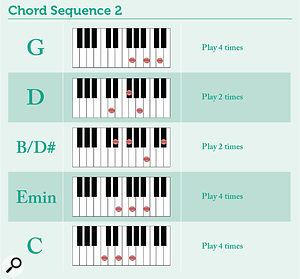 So we have a basic chord sequence that’s easy to play. Now let’s add a bass note to thicken things up. You will be playing all the chords above with your right hand. With your left hand, play the root note of each chord as a single note. So, for the G major chord you will play a single note of ‘G’, but lower down. Hold down the low ‘G’ while playing the chord four times with your right hand, then move on to the next one.

This is where the fun starts. We are going to take this chord sequence and look at how we can spice it up. I’m not going to bore you with theoretical jargon at this point to explain how and why, I’m just going to show you!

The chord we’re using as a passing chord is B major over D#, and it gets us from D major to E minor. This is a ‘slash’ chord, so called because it’s abbreviated using a forward slash — in this case, as B/D# — to indicate the use of a bass note (D#) that’s not the root note of the chord. You can use it whenever you go to E minor, as it’s irrelevant which chord you start on. All that’s important is that you are going to E minor, and that you use B/D# as a passing chord to get you there. 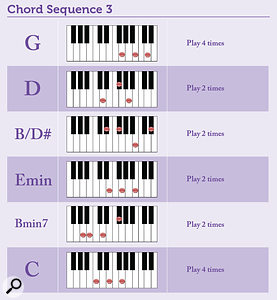 Let’s take this a step further, still starting with the same classic chord sequence. We can add another chord after the E minor that leads us nicely on to C major.The B minor 7 adds a little ‘sparkle’ to this boring sequence. You play it by bridging your thumb over both the ‘A’ and ‘B notes. The bass note you need to play with this is a ‘B’.

The passing chords that we have looked here are just the tip of the iceberg. There are literally hundreds of combinations that can get you from one place to another, and learning just a handful — without ever having to study any music theory — will inspire your compositions and help give you some fresh sounds and ideas. To help you along the way, I’ll be revisiting this theme in a couple of future articles.