In this month’s column we’ll be looking at how to get more from Logic X’s new MIDI plug-ins. First we’ll go through how to print the MIDI output of the Arpeggiator plug-in into a track, so that you can edit your arpeggiated parts. We will also look at how to layer and split different synthesizer patches across a key range, incorporating key splits, chord generation and arpeggiators to create powerful stacked synthesizer sounds.

Although Logic’s new Arpeggiator MIDI plug-in is great, there is no obvious way to record the output of the arpeggiator into a MIDI region so that you can further refine a part. There are a few workarounds, but this one is probably the best. It requires the use of the IAC (Inter Application Communication) bus, which is configured in the Audio MIDI Setup application. You should set this up before opening Logic X. Read the box below for how to do this.

Once your IAC bus is set up, open Logic. Begin by creating a Software Instrument track and naming it ‘Source’, then, from the Library, navigate to the Arpeggiator / Synth Basics / Dripping Cycles preset. Using the Dripping Cycles preset, record a riff into the Source track. When using arpeggiator parts it’s often beneficial to quantise the timing of the your performance (see Audio Example 1 at http://sosm.ag/mar15media). 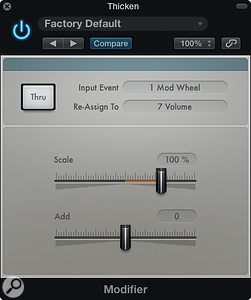 Screen 1: The Modifier plug-in is a great way to set up simple hardware control tasks. Here the Mod Wheel of a keyboard is set to control the channel volume of a synth part.Now let’s go through how to print your riff, complete with MIDI processing, to a new track. Begin by duplicating the track and renaming it ‘Print’, then on the Print track remove the Arpeggiator MIDI plug-in. Go back to the Source track and replace the ES2 software instrument with Logic’s External Instrument plug-in and, from the MIDI Destination menu, choose the name of one of your IAC buses. Logic will now send the MIDI from your Source track through the MIDI effects and out of Logic to the IAC bus. If you record enable the Print track and hit play, you will hear Logic routing that MIDI from the IAC bus into the Print track — the end result is that you hear the arpeggiated track again. You can now record the MIDI data into the track, and once recorded, edit it using the normal tools.

Now that you have printed your arpeggiated data you could experiment with layering and manipulating different parts. To thicken the arpeggiated part, duplicate the Print track and its MIDI region and rename the track ‘Thicken’. Now choose a synth sound to complement the Print track — a good one might be the Synthesizer / Plucked / Scatter Pad preset. You could edit the duplicated MIDI part so that it combines with the original in more interesting ways, or you could turn to Logic’s MIDI effects to do the job for you. The Velocity Humanizer preset in the Randomizer plug-in is a great starting point for introducing subtle variation, while the Note Repeat effect is great for MIDI delays. Remember, you can always print the MIDI output to another track for further experimentation.

Once you have found a combination of sounds you find pleasing, it’s often nice to add some hands-on control to try fading different elements in and out. To do this, on the Thicken track add the Modifier MIDI effect. Open the editing window of the Modifier effect and set the Input Event field to Mod Wheel, set the Re-Assign To field to Volume and the Scale field to 100 percent. Now, moving the modulation wheel on your keyboard will control the volume of the Thicken track, allowing you to easily add movement to the layering of the two sounds. You could expand this idea so that, as you move the Mod Wheel up, the Print track fades down and the Thicken track fades up. To do this, call up an instance of the Modifier plug-in on the Print track and this time set it as follows: Input Event to Mod Wheel, Re-Assign to Volume, Scale to -100 percent and Add to 100. Now record enable both the Print and Thicken track and move the Modulation wheel to hear Logic fade between tracks, as demonstrated in Audio Example 2.

Another way to approach getting more from your MIDI plug-ins is to explore the possibilities of layering sounds inside a Track Stack. It’s normal for workstation keyboards to allow you to layer many patches together to create performances. With Track Stacks we now have a similar facility in Logic. Let’s see how incorporating MIDI plug-ins can achieve more interesting Track Stacks. 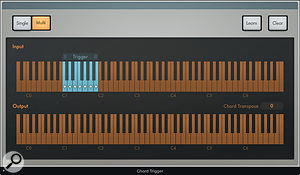 Screen 2: The Chord Trigger MIDI effect is set up to trigger chords with the key range C1 to B1.Create a new software instrument track, load a pad sound on it and name the track ‘Pad’. From the channel strip, add an instance of the MIDI plug-in Chord Trigger. This makes it easy to trigger chords with single keys on your keyboard. Open the Chord Trigger editing window — we are going to define our own chords within the C1 to B1 key range. This will restrict the triggering of chords to a single octave, leaving the rest of the keyboard free for other duties. First, put the Chord Trigger plug-in into Multi mode by pressing the Multi button; in this mode each key triggers a different chord voicing. Now click the Learn button. The Learn function works by waiting for you to define a Trigger key and then a Chord voicing. So, on your MIDI controller keyboard, hit C1 — that will be the Trigger key — then play a C-major chord in a voicing of your choice. Now Logic has learnt that voicing to the C1 trigger key. Without coming out of Learn mode, repeat the process, hit D1 to define the trigger key and then play a D-minor chord in the voicing of your choice. Keep going until you have assigned a range of chord voicings from C1 to B1 and then turn the Learn mode off. When you have finished, your Chord Trigger plug-in should look like Screen 2, with only the C1 to B1 key range used, and you should find that playing C1 to B1 plays chords and anything outside that range simply plays single notes. Listen to Audio Example 3 to hear this in action.

Now that we’ve assigned a range of chords between C1 and B1, let’s set the key range of the channel strip so that all other incoming notes are ignored. Insert the MIDI plug-in Scripter above the Chord Trigger plug-in by clicking just above it. This can be a little fiddly, but once you’ve opened it select the Factory / Key Range preset from the Scripter’s Preset menu. Once loaded, set the Minimum Pitch to 36 and the Maximum Pitch to 47; now only notes within this range will make it to the Chord Trigger object. You can also define a key range within a channel strip from the Track Inspector Key Limit field. 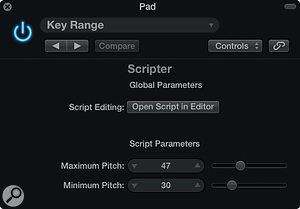 Screen 3: The Scripter’s Key Range Preset can be used to filter out unwanted notes. Layer this Pad sound with a rhythmic pluck sound. To do this, duplicate the channel strip, and rename it Pluck. On the Pluck track keep the existing MIDI plug-ins but change the instrument to a pluck sound; I used the ES2. From the channel strip add the Arpeggiator MIDI plug-in after the Chord Trigger plug-in and choose the Complex Chord Groove 03 preset. Record enable the Pad and Pluck tracks and play the keyboard between C1 and B1. Now Logic plays the Pad sound and layers this with your new rhythmic Pluck part, as you can hear in Audio Example 4. You can carry on the layering process by duplicating the Pluck track and changing the synth and Arpeggiator presets. Aim for something a bit like Audio Example 5.

Now let’s add a lead part that plays only in the key range above the chords that you have already defined. Create a new Software Instrument track and rename it Lead. From the library load a Synth Lead sound, then from the Channel Strip MIDI Effects area add an instance of Scripter and choose the Key Range preset as before. This time, set the minimum Pitch to 48 and the maximum Pitch to 127.

Let’s finish off by combining all of our sounds into a Track Stack. Highlight all four tracks and Ctrl-click on one of the track headers to reveal a menu. From this menu choose Create Track Stack, and from the subsequent pop-up box choose the Summing Stack option. Click Create to apply the change, and record enable the Track Stack to play. When you play across the key range, you should notice that the notes between C1 and B1 trigger chords, and the notes above B1 play the lead part, as demonstrated in Audio Example 6.

This entire Track Stack can now be saved and recalled into any project. You can take this further by configuring the Smart Controls of the Track Stack to contain elements from all the individual tracks.

Logic X Track Stacks and MIDI plug-ins give you a huge amount of flexibility to layer sounds like a powerful workstation keyboard. If you’re feeling adventurous, you could create an entire piece of music in a single Track Stack!

Just as we were going to press, Logic 10.1 was announced at NAMM 2015. Head over to our news pages for more information, and read more about this update in next month’s Logic column.

Setting Up Your IAC Bus

Open the Audio MIDI Setup application from within your standard OS X Applications folder. Go to the Window menu and select Show MIDI Window. From within it you should see the IAC Driver Icon; double-click on this to bring up the IAC Driver Properties window, making sure you tick the box labelled Device Is Online. Once the IAC driver is online you can use it to send MIDI between applications. The IAC Driver allows you to create any number of virtual MIDI ports. You can add more ports using the ‘+’ button under the Ports column and rename your Ports in the Device Name field.