Many of us need to regularly use virus checkers, but we don't want them interfering with PC music performance. Fortunately, there are ways to make sure that doesn't happen.

Virus checking is part and parcel of using any PC today. Most anti-virus utilities feature background scanning options that constantly monitor your system, reading each file before it's opened or run, and after you've finished writing to the file, to check for possible nasties. To minimise their overheads they often scan only a sub-set of file types but, nevertheless, most musicians don't want programs scanning files in the background while they're trying to squeeze maximum performance from their music software.

As always, the best way to avoid virus issues altogether is to keep your music partition or dedicated hard drive well away from the Internet, but failing that you should use a virus checker that you can both run and update on demand. This is far safer than running one continuously in the background, or having it update automatically at a preset time that might not be convenient if you're halfway through that perfect take.

Even if you have a dedicated music PC that's never connected to the Internet, it may be useful to have on-demand virus checking available as an option, just in case a friend or client persuades you to install some software that later turns out to be problematic.

There's a large number of virus-checking utilities available, ranging from freeware offerings to major products from commercial developers (surprisingly, you sometimes get better detection capabilities from the former!). I've been happily running AVG's Anti-virus Free Edition (http://free.grisoft.com) for several years on my PC, but I recently investigated various competing products to see if they could do better.

As a result, I can recommend various commercial products, such as Bit Defender's Antivirus (www.bitdefender.co.uk), Eset's NOD32 (www.eset.com), and F-Secure's Internet Security 2007 (www.f-secure.com), although if I were buying just one I'd personally use Kaspersky's Anti-Virus 7 (www.kaspersky.com), because it currently seems to be achieving the highest virus-detection rates. Sadly, the well-known McAfee VirusScan Plus 2007 (www.mcafee.com) and Norton's AntiVirus 2007 (www.symantec.com) both seem to be slipping in this respect.

However, like millions of other people I'm perfectly happy with the performance of freeware products. AVG's Anti-Virus Free Edition is still very popular, as is Avast 4 Home Edition (www.avast.com) and Avira's AntiVir Personal Edition Classic (www.free-av.com), and while Clamwin (www.clamwin.com) looks fairly basic and is slow to run, it does sometimes pick up things that other checkers don't.

I ended up downloading and installing both Clamwin and AntiVir to compare them with AVG Anti-Virus, and during the following couple of weeks both found a couple of suspicious files that were missed by the AVG product. Of the three, I was most impressed by AntiVir for its speed and thoroughness, but I've left all three products installed on my PC, for a belt and braces approach, mostly running AntiVir but occasionally using one of the other two to see if it spots anything else.

Running several virus checkers will often result in conflicts if you leave their background scanning options active, but most are quite happy to co-exist if you run them on demand. Clamwin is unusual in being on-demand by default, which makes it easy for the musician, but with most other virus checkers rather more effort is required to achieve this behaviour. 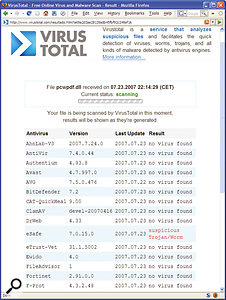 If your virus checker claims to have found a suspicious file, but you're not convinced, try uploading it to the independent Virus Total web site to find out what 30 other anti-virus utilities think.If you want to temporarily disable background virus checking while you make some music, you can simply use the Quit or Shutdown options of your virus checker's System Tray icon. However, while this may remove the control centre, it will generally leave other memory-resident tasks still running in the background. Completely disabling all the automatic features of the average virus checker is rather more convoluted, but if you want to make it 'on-demand only', here are a couple of examples to give you the general idea.

For Anti-virus Free Edition, first click on its Control Center's Scheduler button, then double-click on each of the scheduled tasks listed and un-tick all the available options for scheduled scanning and updates. Next, click on the Shell Extension button and then on 'Deactivate' that appears near the bottom of the window. Do the same for the Email Scanner button. Next, you'll need to un-tick all the options on the Properties tab of the Resident Shield button to disable background scanning. With AntiVir Personal Edition Classic, click on the Scheduler page, right-click on each option and choose Delete, then click on the Status page and then on the AntiVir Guard 'Deactivate' link.

Next, you should remove the start-up task that loads the utility icon into your Windows System Tray. The easiest way to do this is using the freeware Autoruns utility from www.sysinternals.com. You'll find at least one start-up task relating to your anti-virus utility: in the case of AVG it's 'AVG7_CC.exe', for AntiVir it's 'avgnt.exe', and for Clamwin it's 'ClamTray.exe'. Just un-tick its Autoruns box for now to prevent it being launched in future (you can permanently delete it later on once you're sure everything still runs smoothly). If you want to disable AntiVir's Shell Extension (which adds the right-click option to manually scan files inside Explorer) un-tick it on Autoruns' Explorer page.

Finally, you'll need to run the Services tool (type 'services.msc' into the Windows XP Run box) and alter the properties of Services relating to your anti-virus utility, by right-clicking on each one, choosing Properties and changing the Start-up Type. Clamwin doesn't require any changes here, but for AVG Anti-Virus Free you need to set the service named 'AVG7 Alert Manager Server' to Disabled, and change the 'AVG7 Update Service' to Manual, while 'AntiVir Personal Edition Classic Guard' needs to be set to Disabled (you need to leave 'AntiVir Personal Edition Classic Scheduler' at Automatic, since otherwise you won't be able to run a manual update either).

You only have to perform these steps once, and then make sure you launch your anti-virus utility manually at least once a week after performing a manual update.

If you've installed a big batch of Microsoft Hotfixes for Windows XP, you'll find a correspondingly large number of entries in your Windows folder whose name starts with '$NtUninstall'. As their name suggests, these are backups (so that you can uninstall any Hotfix if it causes problems), but once you've had them installed for a few weeks you may be happy to delete them. However, not all '$NtUninstall' folders relate to Hotfixes, so I recommend using the handy Remove Hotfix Backups utility, written by Doug Knox (www.dougknox.com/xp/utils/xp_remove_hotfix_backup.zip), which knows which ones to delete and which to leave alone. By the way, don't delete the obscurely named $hf_mig$ folder that lurks nearby, since this is referenced if you install updates in the future.

One of the problems of virus checking is that no single application can ever be 100 percent effective, and some also use heuristics (intelligent guesswork) to discover possible nasties. While I'm sure we all applaud such techniques when they uncover real viruses, they can also result in false alarms.

So if your virus checker suggests that you may have a problem file on your hard drive or in your system RAM, how do you know whether or not it's really dangerous? One sensible approach is to use several virus-checker utilities to see if they agree: many let you scan a specific file by integrating themselves with Microsoft's Explorer, using the Shell Extensions mentioned earlier, so you can right-click on the file and choose the appropriate 'scan' option.

If you don't want to install and update several virus-checking utilities, I suggest you pay a visit to Virus Total (www.virustotal.com). Once you're aware of a suspicious file you upload it to this web site, where its content is checked against the latest versions of around 30 different anti-virus engines, to see if it contains a virus, worm, trojan or other malware. When ClamWin declared the pcwpdf.dll file used by the well-respected PC Wizard utility suspicious I wasn't so sure, and when I posted it on Virus Total just two other utilities agreed with it, while the remaining 28 declared "no virus found" (including the associated ClamAV).

The service is free and independent, and although I wouldn't advise sending files containing personal data to a public web site like this, I wouldn't worry about the safety aspects of sending anything else (PC World has also voted Virus Total one of their 100 Best Products for 2007, which is another vote of confidence, in my book). Another similar web site is Jotti's malware scan (http://virusscan.jotti.org), although this currently checks against significantly fewer anti-virus engines.

This month I'm turning the spotlight onto Italian developer Luigi Felici, whose NuSofting (www.nusofting.liqihsynth.com) range of soft synths includes some fascinating physically modelled synths. Many are PC-only, although some are also available to Mac users. As a lover of both harp sounds and physically modelled synths I was particularly interested in trying out his Harptime Pro, but since it can produce such a wide range of expressive plucked string sounds I'm sure it will appeal to lots of other musicians.

Nusofting's Harptime Pro may not have the world's most impressive graphic interface, but the physically-modelled harp sounds it can produce are things of beauty and finesse! There are now quite a few multisampled orchestral harps to be found in various sample libraries, plus the occasional Celtic harp inside ethnic sample bundles (there's a good one in Big Fish Audio's Celtic Instruments collection, for instance). However, to the best of my knowledge Harptime Pro is unique in offering the sounds of a plucked folk harp using an engine that models 12 individual strings and features the sophisticated sympathetic resonances that occur between them. Also modelled are the attack and decay behaviours of the Bray Pins (that hold the string to the body of the harp), with 12 individually modelled 'shaping' options that cover nylon- and wire-strung instruments and the buzzing tone of medieval harps.

You can either link all 12 sets of string parameters together, to control their tuning, pluck position, brightness and excitation, or separate them for special stretch tunings, exotic scales or special effects, but there are also global controls in charge of pluck amount, damping, the pitch envelope of loosely strung instruments, the modulation/sympathetic resonance, and various more traditional velocity, EQ and chorus options. You can even produce harp glissandi using your mod wheel.

While Harptime Pro 's graphic interface isn't particularly inspiring, its audio results are excellent. A sampled harp can only ever sound like that one instrument, and in my experience can often suffer from sudden jumps in timbre between notes or velocity layers, but Harptime Pro responds smoothly like a real instrument, and is far more versatile. It captures the dynamics and sound of the Celtic harp extremely well (I compared it with various recordings of real instruments), but also lets you quickly experiment with string materials, tunings and so on, while the sympathetic resonances really add extra life and realism.

The 41 presets cover lots of sonic ground, from traditional folk harps of all sizes and periods, through modern electric harps and the odd electric piano, to more exotic plucked instruments such as African harps and Japanese Koto. At just $48 it's incredible value for money, and I suggest you snap it up before it's given a face-lift and has its price whacked up!