Working directly with 'objects', such as MIDI or audio clips of any length from a few milliseconds upwards, opens up a non-linear approach that can provide creative opportunities and also save you CPU resources. 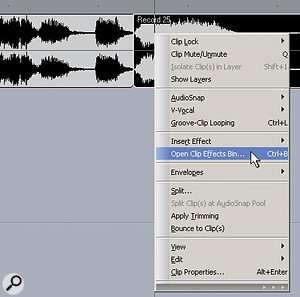 To insert an effect in an object, right click on the object and select Open Clip Effects Bin.Object-oriented editing means the ability to edit and/or process individual objects, such as a MIDI or audio clip — whether they last the entire length of a song or only a few milliseconds. This is a different way of thinking than linear-style track editing, where you (for example) insert a plug-in into a virtual mixer that processes a track, or apply an automation curve to control a parameter for the duration of a track.

The word 'object' is essentially interchangeable with 'clip', but for clarity when working with Sonar, we'll define an object as a 'sub-set' of a clip with its own characteristics. Amongst other advantages, object-oriented editing can simplify the automation process compared to drawing track envelopes, and make it easier to do 'microsurgery'-type editing.

At first glance it might seem that this adds another level of tedium to the editing process, as working with little pieces of audio seems more involved than working with tracks. But that's not always the case; for some applications, object-oriented editing can be far more efficient. As one example, consider plug-ins. If you load a plug-in into a track insert, it's active for the entire length of the song — and drawing CPU power. But if the effect is needed in only a few places, you can create individual objects that are processed with that effect. The effect only draws power from the CPU when these particular objects are being processed.

This is perhaps the most important use of object-oriented editing. Sonar can apply MIDI effects (MFX) to MIDI objects, and audio processing plug-ins to audio objects. For example, suppose you want to add delay to the last word of a vocal, so that the word trails off into silence. Here's how you'd do it: 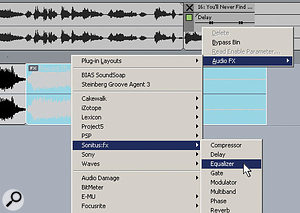 In the upper track toward the right, an object that already has delay inserted is about to have the Sonitus:fx Equaliser inserted as well. Note in the lower track that there's a small box in the upper left corner of the clip (coloured light blue) marked 'FX'. This means that there's an object effects bin inserted into this clip. 1. Do a track split at the beginning and end of the word, to isolate it as a separate object. The easiest way to do this is to click at the beginning of the word and type 'S', then click at the end of the word and type 'S'.

3. An effects bin opens up that's a miniature version of the track effects bin you'll see in the Track view of the Console window.

4. Right-click on a blank part of the effects bin and select the desired audio effect from the pop-up menu.

5. The effect will now appear in the bin. As in the standard effects bin, there's a small tick-box to the left of the effect name; when this is green, the effect is enabled. When it's grey, the effect is disabled.

6. You can insert more effects, if desired. As soon as you click anywhere other than the effects bin, the object's effects bin shrinks to a small box marked 'FX'. This lets you know that there's an effects bin in the object. To open an effects bin again, just click on that box.

One very significant aspect of inserting an effect into an object is that any effect comes to a complete halt at the end of the object. In other words, if there's a reverb tail or delay decay caused by feedback, it will not extend past the object. Fortunately, there's a workaround. 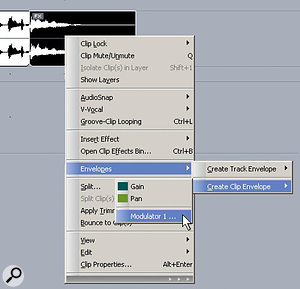 You can create envelopes for any effects in the object's effects bin. As opposed to track envelopes, which last for the duration of a track, these envelopes extend for the length of the object only. 1. Place the Now time just past the end of the object.

2. Put the track containing the object into record mode, but turn down the level of any signal feeding into the track, so you can record silence.

4. To make sure this clip is truly silent, click on it and go Process / Audio / Gain. Set all Gain levels to minimum, then click on OK.

5. Click on the object you're processing, then Control-click on the clip containing silence, so that they're both selected.

7. The object will now be extended by the amount of silence you added, and any delay or reverb can spill over into it.

Note that the process of bouncing clips removes any effects bins inserted in those clips. So in this example you would need to re-insert delay, reverb or whatever into the new, longer clip.

Now that we know how to add effects to objects, here are some ideas on how to use this editing option.

If you've been using Sonar for a while, you probably know that you can right-click on a clip, select Envelopes, choose Create Clip Envelope and add either a Gain or Pan envelope to the clip. However, if there's an effect inserted in the object effects bin, you can also create envelopes within the object itself for the effects. To do this, proceed as you normally would to select a Gain or Pan envelope and you'll see automatable effect(s) listed below the Pan Envelope option.

This allows an exceptional amount of control within very short audio events, if desired. Furthermore, you can insert track effects that kind of act as 'master' effects. One example would be to add a fairly standard delay (such as a quarter-note or half-note) to a track, then add delay with a dotted value (for example, a dotted half-note) within individual objects. 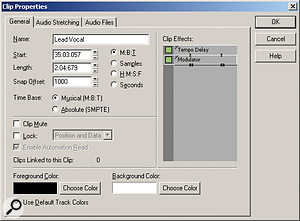 The Clip Properties window consolidates several object-oriented parameters in one place, including a display of whatever effects are included in the object's effects bin. The Audio Stretching tab offers a wealth of useful functions involving groove-clip looping, AudioSnap and time stretching.

Here's a shortcut you can use if you need the same effect (or a variation on a particular effect) in several small, sequential objects. For example, suppose you want to apply a rhythmic 'sample and hold' filter effect to a sustained guitar power chord, where the filter's cutoff frequency changes every eighth note:

1. Split the power chord off as a separate object.

2. Open an object effects bin in this object, then insert a filter.

3. Adjust the filter as desired for the first step. Typically, you'd set a relatively high resonance.

4. Split the power chord at every eighth note. The filter will appear in each split of the object.

5. Set the filter in each split to the desired cutoff frequency.

You can open an object's effects bin when it's just a small square marked 'FX' by right-clicking on it and choosing Open Clip Effects Bin (for which the keyboard shortcut is Control + B).

Once it's open, you can bypass the bin and all its effects by clicking anywhere within the bin and selecting Bypass Bin; rearrange the order of effects within the bin by clicking and dragging, just as you would with the standard tracks effects bin; and delete an effect by either clicking on it and hitting the Delete key, or right-clicking on the effect or its enable box and selecting Delete from the pop-up menu.

The instructions regarding applying effects to audio objects also apply to MIDI effects and MIDI tracks: they're inserted in the same way, and they follow the same rules when copying and moving. Groove clips follow the same rules as well. If you roll out a groove clip (MIDI or audio), the effects bin will remain in the original part of the object. If you then split the object, the effects bin will be copied to the split(s).

One other object-oriented editing window continues to evolve (if Cakewalk ever decide to consolidate everything in Sonar that's related to clips/objects in one window, this would be the one): the window that appears when you right-click on an object and select Clip Properties.

The General tab shows the name of the clip, its start time and its length (in Measures:Beats:Ticks; Samples; Hours:Minutes:Seconds:Frames; and Seconds). You can edit all of these parameters. Time base lets you select musical or absolute time for the clip, which affects where the clip starts if you change tempo. With a musical time base, the Measures:Beats:Ticks position remains the same, but the absolute (SMPTE) time changes. With SMPTE as a time base, the reverse occurs.

However, you can also mute the clip, and 'lock' it from this window (both options are also available if you right-click on the object). Lock is crucial for audio-for-video work, as it lets you tie samples to a specific SMPTE time. For example, suppose you build a sound effect that coincides with a particular visual cue into a soundtrack, but the producer decides you need to speed up the music just a bit. Locking the clip to SMPTE ensures it will always hit on the visual cue that happens at a specific SMPTE time, regardless of how the tempo changes.

While it may seem that the option to set a 'snap offset' (in samples) for audio clips is useful, the function can only shift the clip late compared to a snap point. So if you have something like a pad sound with a long attack time that needs to start early in order to build over the right amount of time, using snap offset can't help you. However, if you find just the right amount of delay for a snare-drum hit, for example, you can copy or change the object's position while being sure that the amount of offset will be preserved.

Finally, there's also a Clip Effects display. Although you can't drag effects into or out of this display, you can delete effects, change their order, instantiate new effects and bypass the clip's effects bin. We'll ignore the Audio Stretching tab for now, as that opens up a whole other world of options.

The Object Of The Exercise

Object-based editing may not be a particularly sexy topic, but anything that saves time or makes your life easier is worth investigating. Although I still use track processors a lot, being able to create effects in different bits of audio can simplify the process of making complex edits, as well as opening up a lot of creative possibilities.