A recent Apple special event saw the launch of a new iMac, a new version of GarageBand and a new iWork suite - plus a new Mac Mini is waiting in the wings. Read on for more...

It's been nine years since the release of the original G3-powered iMac, the computer that arguably started the reversal of Apple's fortunes. During its life, the iMac has seen two dramatic redesigns from the original Bondi-blue CRT 'bubble'. There was the 'anglepoise' iMac in 2002, which suspended an LCD screen above a base unit and featured a G4 processor, followed by the G5 iMac in late 2004, which put the guts of the computer behind an LCD panel in a simpler, all-in-one design.

Given the significance of the iMac to Apple's recent history, it was perhaps fitting that this was the first Mac to be introduced with an Intel processor (at Macworld 2006), although this new model stuck with the slimmer, second-generation design of the G5 iMac instead of adopting a new appearance. However, at a special event held in Cupertino on August 7th, Apple introduced a new, redesigned iMac; and while it's arguably an evolution of the same design language used in the previous model, the new, now even slimmer iMac makes use of aluminium and glass for its enclosure, and looks, well, rather stunning.

There are some interesting reasons behind Apple's decision to redesign the iMac using aluminium and glass. Firstly, these materials are easier to recycle, and Apple have made a significant effort over the last few months to respond to earlier criticism from Greenpeace that they weren't doing enough to be environmentally friendly. Secondly, it's interesting to note that the white G5 iMac 'panel' was said to be inspired by the design and popularity of the iPod, and it's not difficult to see a similarity between the recently introduced iPhone and the new iMac. Finally, though, Apple have used aluminium in the enclosures of their professional products for many years, and they seem to have made a conscious effort to present the new iMac as being more 'professional'. 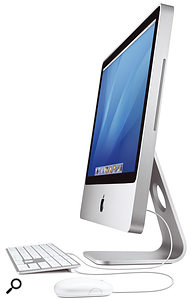 The new iMac is an elegant evolution of its all-white predecessor, boasting a slimmer, sleeker, more professional aluminium and glass design. With a high-end model available featuring a 24-inch display and a 2.8GHz Core 2 Duo processor, this really could be your studio in a box. Photo: AppleI had the opportunity to sit down with some of Apple's product managers a few days after the event in Cupertino, and they reiterated what Apple CEO Steve Jobs had stated during his introduction of the new iMac: that this new design has the duality of looking like both a high-end consumer product and a professional product. But this professional appeal extends beyond the exterior aesthetic, because this is the first iMac to offer both a Firewire 400 port and a Firewire 800 port, a feature certain to raise the eyebrows of a few musicians who rely on external Firewire devices. Another feature that's great for those that want to run audio (or video) applications on the new iMac is that you can now order systems with either 500GB, 750GB or 1TB hard drives instead of the default option.

Apple offer three basic configurations for the new iMac: the first two feature 20-inch displays, while the third model has a 24-inch display. This is significant in that the entry-level iMac, which previously offered a 17-inch display, now has a 20-inch LCD for no extra cost, with a resolution of 1680 x 1050, instead of the 17-inch's 1400 x 900. The 24-inch display offers a resolution of 1920 x 1200, and both displays are now glossy, providing more vibrant colours. While I haven't been so keen on glossy displays in laptops, since they're more reflective than the normal displays, for a desktop computer that's going to be used indoors this is obviously less of an issue.

The entry-level iMac has a 2GHz Core 2 Duo processor, a 250GB 7200rpm hard drive and an ATI Radeon HD 2400 XT with 128MB memory for graphics, while the other two models feature a 2.4GHz Core 2 Duo, a 320GB 7200rpm hard drive, and an ATI Radeon HD 2600 Pro with 256MB memory. All models come with 1GB memory (upgradeable to 4GB), an 800MHz system bus, an 8-speed, dual-layer SuperDrive and all the usual iMac features, such as the built-in iSight camera and an infra-red receiver for the included Apple Remote. In addition to the Firewire ports there are three USB 2.0 ports, Gigabit Ethernet, built-in 802.11n wireless networking, Bluetooth 2.0+EDR, a mini-DVI port (with support for VGA, S-video and composite video), and headphone and microphone ports, which, annoyingly, are still on the back of the computer.

Another significant change for the new iMac is the introduction of a new, incredibly thin Apple keyboard, which is also made of aluminium and features the same key style as the MacBook. At the time of writing I hadn't had chance to type on the new keyboard for any length of time, so I can't validate my scepticism on how it will feel; but one definitely positive point about it is that it features two USB 2.0 ports instead of the old (and slower) USB 1.1 ports, as with the previous keyboard. The new Apple keyboard is already available to buy separately and costs £29.

The iMac has often been a favourite entry-level machine for musicians on a budget, but with the new model Apple are actively targeting professional users who might not need a Mac Pro to carry out their work, or might prefer the iMac form factor and price. Speaking of which, the pricing on the new iMac is quite aggressive, especially for Apple, and especially as the entry-level model now features a 20-inch screen. The only part of the iMac that feels a little less than professional is the amount of memory supplied with the three standard configurations: 2GB instead of the 1GB standard supplied across the whole line would have been more appropriate. Still, when the iMac was demonstrated to me it seemed pretty damn fast, and I didn't notice too much noise, although I was in an office environment. I hope to try it out on my own once Apple are able to send us a review model.

The Mac Mini's form factor does come in handy for some applications, but considering that the new low-end iMac costs just £300 more than the 2GHz Mac Mini, and the former includes the display, keyboard and mouse missing from the Mac Mini, along with a larger, faster hard drive, Firewire 800, and a faster system bus, the iMac is probably the better option for the musician on a budget.

In many ways, August 7th felt like Macworld seven months late (or five months early, depending on how you look at it). In addition to the new iMac, Apple also announced new versions of their consumer-oriented iLife and iWork software bundles which, in the past, have been announced at the aforementioned Macworld show held at the beginning of each year in San Francisco. iLife '08 features new '08 versions of all five iLife applications: iPhoto, iMovie, iWeb, iDVD, and, of course, GarageBand (see box). Within iWork '08 are updated versions of Pages and Keynote, along with a brand-new spreadsheet application called Numbers.

Even if they mostly use their Mac for audio and musical tasks, most Mac users I know still like to occasionally dabble with the iLife applications, especially iPhoto and iMovie. And in the case of iMovie, unlike the other applications in the iLife bundle that are updates to the versions supplied in iLife '07, iMovie '08 is in fact a complete rewrite aimed at making it even easier to assemble a simple movie from a series of shots imported from a video camera. The new user interface is pretty neat, but because the application is a rewrite, not all of the functionality from the previous version of iMovie is currently implemented. To compensate for this, Apple are offering iMovie 6 as a free download from their web site for anyone who purchases iLife '08.

If iPhoto '08 is a less significant update than iMovie, it nevertheless offers some indispensable features for organising and sharing your photos. In addition to organising your shots manually into albums, iPhoto will automatically arrange your photos into so-called events, based on the fact that the photos taken in a single day are likely to belong to the same 'event'. Merge and Split commands are provided if this isn't the case, but the simple one-day rule already makes managing your photo library easier.

There's also a new way of sharing your pictures online in iPhoto, via the new .Mac Web Gallery (which also works with iMovie for movies), and .Mac users now get 10GB of online storage instead of the previous 1GB, so you'll have enough space to store your media.

One particularly neat feature of .Mac Web Gallery is the ability for iPhone users to automatically upload their photos to a gallery on-line; and if this on-line gallery is synchronised with iPhoto, the application will automatically download the previously uploaded photo to your Mac. What's exciting about this is that it's the first time Apple have released an innovative web application that ties together multiple devices, and hopefully this type of workflow will be extended to other areas in the future — perhaps even music and audio. 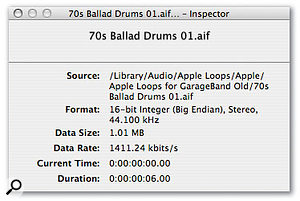 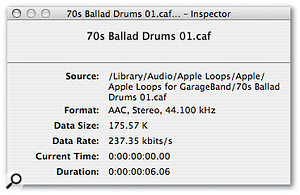 Here you can see two Inspector windows for the same loop: one is the AIFF version supplied with Logic and previous versions of GarageBand (top), and one is the CAF version supplied with GarageBand '08 (bottom). Notice the big difference in file size and data rates.Photo: AppleOne interesting change to GarageBand that Logic users may want to be wary of is that GarageBand's Apple Loop library is now supplied as CAF files, rather than AIFF files, as in previous versions. CAF (Core Audio Format) is a new audio file format that was introduced with Mac OS X Tiger (v10.4), and one of its main features is that it describes the amount of audio stored in the file as a 64-bit value instead of a 32-bit value (as AIFF does), allowing you to store more than 4GB of audio data in a single file. However, it is not for this reason that Apple chose to use CAF for GarageBand, since the loop library is now stored as compressed AAC audio within the CAF file, instead of uncompressed PCM audio data as before with the AIFF files.

The good news is that the 'Apple Loops for GarageBand' folder that contains 1198 loops now takes up only 233.1MB instead of 1.09GB; but the bad news is that, aside from the fact that it probably takes more CPU cycles to play back AAC-encoded audio, Logic Pro 7.2 doesn't actually support CAF files (although it does support the playback of AAC audio data). This means that if you've used any GarageBand Apple Loops in a Logic song, they will no longer play back. You can, however, reinstall the original uncompressed AIFF loops by reinstalling Logic, if you want to, although in addition to Logic not being able to use CAF files, it's also currently impossible for Logic to import songs created with GarageBand '08. Since Apple have always maintained file compatibility with GarageBand in the past, I image this situation will be rectified with the highly anticipated next version of Logic.