With lack of driver support for so much perfectly usable hardware, can anything be done to counter built-in obsolescence?

Our SOS PC Music forum makes for interesting reading, especially when you use it to spot trends. Over the last few months, I've noticed fewer threads concerned with buying the latest PC hardware, but an increasing number from people who are desperately attempting to keep existing hardware running. A huge number of us now have audio interfaces, printers, scanners and the like that can't be used with our latest PCs, simply due to lack of suitable (often 64-bit) drivers. Of course it's easy to understand why: manufacturers don't earn any extra money by writing drivers for hardware that was purchased some time ago, yet we've all grown up expecting to cast aside our current computers every few years for a more powerful one, probably with a newer operating system. This combination is bound to result in, first, frustration, and then the eventual abandonment of perfectly good hardware.

However, some enterprising musicians are determined to keep their hardware functional. Examples of projects mentioned on the SOS forums include getting an ancient Yamaha SW1000XG soundcard to run under the 32-bit versions of both Windows 7 and 8 (using its Windows XP drivers), so that its onboard MIDI hardware synth (effectively an MU100) can be utilised. Even the PCI soundcard compatibility issues I discussed in PC Notes May 2007 (/sos/may07/articles/pcnotes_0507.htm), relating to various incompatible edge connectors, have been overcome in some cases, using inexpensive card adaptors. 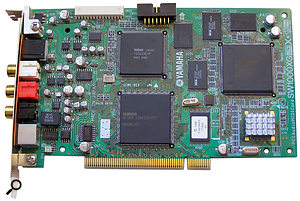 Originally retailing in the UK at £450, yet now changing hands for peanuts, Yamaha's SW1000XG 64-voice hardware MIDI synth with its five 24-bit effect buses is still being used by enthusiasts around the world, partnered by elderly PC life-support systems.

Other musicians are retaining elderly PCs running Windows XP, or even Windows 98, as life-support capsules housing a variety of soundcards, DSP cards and so on. And since all you need apart from suitable power and data connectors is a PC sufficient to run a software editor, even the feeblest old PC with 1GB of RAM (or probably even less) would do the job, generating so little heat that you could probably remove most, if not all, of the noisy cooling fans. There are never any guarantees; some motherboard chip sets may be more accommodating than others with old expansion cards, but for some musicians it's well worth a try if the alternative is throwing away both the PC and the hardware in question.

There are also regular online requests for advice on simpler PCI/PCIe audio interfaces offering S/PDIF I/O, so that people can use them with more up-market A-D and D-A converters. As long as the S/PDIF I/O offers bit-perfect transfers, only the efficiency of the drivers remains relevant, as audio quality ends up entirely in the hands of these external converters. I've taken this approach myself, using an Audient Mico stereo preamp with built-in A/D for my front end, and a Lavry DA10 for output duties, in conjunction with a 12-year old Echo Mia soundcard. Other musicians seem to be adopting the same tactics, with regular forum requests for info and about driver availability for older PCI cards, such as the M-Audio 2496 and 192 and Echo Mia MIDI, since you can safely invest a lot more money on stand-alone converters/preamps without having to worry about any computer drivers later becoming obsolete.

What else can we do with our old PC hardware? Lots of it just ends up in skips, and it's becoming increasingly difficult to even give it away to local educational and charitable establishments because of support issues. Thankfully, some specialist companies do offer to take donated PCs, and refurbish and recycle them for charitable and non-profit organisations (a list of UK companies that do this can be found at www.itforcharities.co.uk/pcs.htm. Is it any wonder that the MIDI interface is still so popular when you can use it to plug in MIDI hardware that was designed 30 years ago and have it up and running in seconds? I suspect this is yet another reason why a clutch of budget analogue synths are being re-introduced by various manufacturers who have spotted our current lust for affordable hardware that offers a true hands-on experience, but without built-in obsolescence! 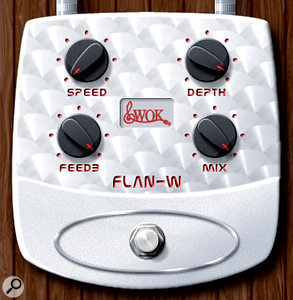 Browser Wars: Microsoft's Internet Explorer 10 (launched six months ago and the default browser for Windows 8) is now available for Windows 7, with a claimed 20 percent real-world increase in web page loading speed compared with IE9 (www.beautyoftheweb.com/download). However, this staggered approach to operating-system support is already attracting flak: XP users can't update beyond IE8, while Vista users can't update beyond IE9, whereas the latest version of most browsers manage to run across all recent versions of Windows. This is probably an incentive to upgrade your operating system as much as anything else. Meanwhile, Firefox is now up to version 19, and incorporates a PDF viewer for much faster opening of the many online manuals in this format. While typing this, I found I was already running Firefox 19, which had silently updated itself during idle moments. Now that's transparency!

WOK Flanger: Finally, for those among us who are financially challenged, our old friend Wolfgang Krumme (aka WOK) has released yet another in his series of free effect VST plug-ins for Windows users (although donations and Facebook 'likes' are always welcome). As its name suggests, Flan-W is a flanger pedal, and it's very effective with electric piano, drum and, of course, guitar sounds. Do point your browser (of whatever variety) at http://music.service-1.de/html/wok_flanger_vst_plugin_flan-w.html and take a listen.