If you've built your own music PC in the last couple of years, you might now be finding that aspects of it need upgrading. PC Notes offers some advice.

Back in October 2008, a Microsoft official was quoted as saying that Mac buyers are paying an 'Apple Tax', and as I write this in early 2009, Microsoft's swipes at Apple pricing are getting even more aggressive. In the US, TV ads have just been aired that follow a woman with a $1000 budget trying to buy a laptop with a 17‑inch screen. She's filmed walking into an Apple store that has just one laptop that she can afford, which only has a 13‑inch screen, and ends up buying a Hewlett Packard PC laptop with 17‑inch screen for just $699 in another store.

Microsoft CEO Steve Ballmer also commented that "The economy is helpful. Paying an extra $500 for a computer in this environment — same piece of hardware — paying $500 more to get a logo on it? I think that's a more challenging proposition for the average person than it used to be.”

PC pricing is certainly getting more cut‑throat, and this also has worrying implications for DAW builders. Contrary to popular belief, most buy their components not in bulk and at discount prices, like mainstream PC builders, but in smaller quantities from the same on‑line companies that DIY builders use, and at the same price. They offer an almost 'bespoke' service, generally building music PCs that match individual customer requirements, provide guaranteed performance with audio hardware and software, at low acoustic noise levels, and also offer generally excellent engineer to customer tech support. Yet they are often accused of 'rip‑off pricing', when in fact most now get a relatively small return for the many hours they spend building, testing and supporting each machine. Let's hope the majority manage to stay afloat, providing their services to musicians who just want to make music on a PC without worrying about hardware problems, and who don't want to negotiate the added learning time and possible frustrations of building their own music PC. Talking of which... 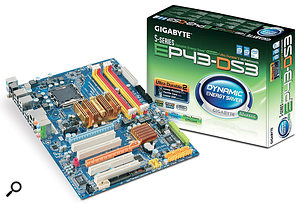 Building an Intel Quad‑core music PC and need plenty of PCI slots? Gigabyte's EP43‑DS3 motherboard could be the perfect candidate for the job.

The SOS PC Music forum is still awash with people asking for advice on building their own music PCs, but recommendations have to change more and more rapidly nowadays, as product life‑cycles get shorter and new products appear ever more frequently.

Anyone who used the recommendations I gave in SOS February 2007 when building my own dual‑core PC will have an Intel DP965LT motherboard with 965 chip set, Intel E6600 dual‑core processor running at 2.4GHz and 2GB of Corsair XMS2 DDR6400 RAM. I personally still haven't outgrown this system — it provides me with more than three times the power of my previous Pentium 4 2.8GHz machine — but you may be finding you need more RAM or processing power. RAM is easy enough to buy, and a lot cheaper now. My 2GB cost me £190 in the UK when I built the PC in December 2006, but nowadays you can upgrade by a further 2GB for a minuscule £23$30.

Although Intel haven't updated the DP965LT's BIOS for some time to recognise newer processor types, there are nevertheless a couple of possible CPU upgrades. As I write this, you can double your processing power by upgrading to an Intel Q6600 quad‑core model running at the same 2.4GHz clock speed — but since the Q6700 quad‑core at 2.66GHz is selling at an almost identical price, of around £140$220, you'd be foolish not to take advantage of its 11 percent faster clock speed.

Hopefully, those who built a system following my more recent advice in PC Notes January 2008 are still happy with the performance of their Intel DP35DP motherboard with P35 chip set and Q6600 processor. However, if anyone is now searching for more processing power, that system could be upgraded to a Q9650 model running at 3GHz, although this will cost about £270$325. That seems, to me, a little expensive considering that you'll only gain 25 percent extra performance.

If you're considering a budget DIY build right now, I'd recommend a Q8200 running at 2.33GHz, which retails for the same price as the Q6600 but should run significantly cooler, as well as having an 8MB instead of a 4MB L2 cache size, and support for the faster 1333MHz FSB (Front Side Bus). If you want to bring your green credentials to the fore, the slightly more expensive Q8200S provides exactly the same performance but consumes a maximum of 65 Watts compared with the 95 Watts of the Q8200. It does cost about 50 percent more, though. I suspect that most musicians with a little more cash will plump for the Q8300 (£160$190), given its higher clock speed of 2.5GHz. Sadly, these more recent Q8000‑series processors aren't an option for the DP965LT motherboard.

For a new budget PC I'd also recommend a different motherboard to Intel's DP35DP, since this is now getting rather long in the tooth. Gigabyte motherboards seem to be getting almost universal praise from DAW builders, and they mostly use the Texas Instrument Firewire controller chips that are so widely recommended for their compatibility with Firewire audio interfaces.

Two suitable models are the GA‑EP43‑DS3 and EP45‑DS3. They have many features in common, including up to three IEEE1394 ports and up to 12 USB ports, but the latter model supports RAM up to the slightly higher DDR1333 spec (although this probably won't result in a significant performance hike with audio applications). The biggest difference between the two is the expansion slot complement. The GA‑EP43‑DS3 provides more PCI expansion slots (four, along with one each of PCIe x1, x4 and x16), while the EP45‑DS3 offers only two PCI slots, but more of the PCIe variety (three x1, plus x8 and x16).

If you need more processing power than you can get from a 3GHz quad‑core processor (and that's already a huge amount!), a more expensive Core i7‑based system is probably the best alternative. Intel's 920 model running at 2.66GHz is by far the most affordable option (£240$280). Gigabyte motherboards are, again, widely recommended for Core i7 systems, with the GA‑EX58‑UD4P and GA‑EX58‑UD4 models providing two different combinations of PCI and PCIe expansion slots. The UD4 has one extra PCI slot, while the UD4P model instead offers an extra x8 PCIe slot, plus support for Dolby Home Theater.

The amount of RAM is up to you, and both boards support up to 24GB, for those running Vista 64‑bit. However, three 1GB sticks should still be sufficient for many musicians running Windows XP or Vista 32‑bit, while three 2GB sticks will make your new machine slightly more future‑proof, especially if you anticipate installing Vista 64‑bit or the forthcoming Windows 7 in its 64‑bit incarnation. 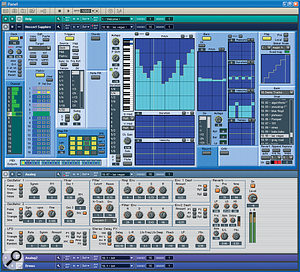 If you're a Reaktor user and fancy a polyphonic step sequencer capable of generating complex, evolving melodies that may not repeat themselves for hours, you should investigate Husserl Sapphire Edition.

Once in a while, I stumble across a niche product that deserves to be introduced to a wider audience, and Husserl Sapphire Edition definitely falls into this category. This impressive product is the latest release in a long line of 'metamusic' products from Heavens On Earth (www.heavensonearth.com), and is currently available only as an Ensemble for NI Reaktor owners.

Essentially, it's a polyphonic step sequencer with 16 separate channels that can modulate each other, although this simple description doesn't do justice to the wonderful results. It has five panels: Husserl Sapphire itself, two analogue synths and one drum synth that it drives by default (although you can divert its output to any software or hardware synths of your choice), and an 18,000‑word, on‑line Help panel that's supplemented by a well‑written, 68‑page PDF manual.

There's a lot to take in at first, but it's a tribute to the panel design that I found myself creating memorable results within a few minutes of first launching HSE. At the heart of each channel is the Pattern, with between one and 16 steps, but even here Husserl goes beyond the typical step sequencer by offering note durations long enough to overlap and create polyphonic effects, or up to three‑note chords played by each step, while the Map section forces sequences to fit your chosen scale, and the Bar panel lets you modify your sequence each time it plays, offsetting parameters such as pitch, velocity, duration and tempo.

HSE can be triggered from its own internal clock for generating stand‑alone music, or clocked from external MIDI notes so you can sync it with other tracks in your sequencer, as well as tracking incoming MIDI pitch and velocity information. Another fruitful area for exploration is the various trigger modes: MIDI Layers, where each note you play generates its own sequence; and MIDI Fugue, where each incoming note retriggers a sequence, overlapping if the previous one hasn't finished.

However, HSE moves way beyond the competition with the intermodulation possibilities of its Matrix panel, where one sequence can change the melody of another in a variety of ways, and your mind begins to boggle at the possibilities! With all the modulations available, using just two or three channels can result in complex, evolving melodies that may not repeat themselves for hours, and there's even a Jitter panel where you can apply random variations to each note, to restore the human touch.

The 107 snapshots (presets) have been carefully written to demonstrate all the main features, while the various demo songs show how Husserl can create believable music ranging from church organ improvisations and fugues through to Gamelan orchestra performances. However, for me, its biggest strength is in creating slowly evolving ambient soundscapes. Considering that several thousand hours of development time have gone into Husserl Sapphire Edition, it seems extremely good value at just $79.99.

Prosoniq (www.prosoniq.com) have announced that, with effect from June 1st 2009, they will discontinue development of Windows products, largely due to piracy, and will in future be exclusively working on the Mac platform. This is indeed sad news; obviously, software developers are feeling the pinch like everyone else at the moment. However, I think blaming the demise of a PC range on PC piracy is rather misleading. I've long been a fan of Prosoniq's Orange Vocoder, including it in 'Exploring PC Spectral Multi‑band Plug‑ins' in SOS April 2007, but the most recent PC version is still dated 2002, and I could find no Prosoniq press release relating to any Windows products more recent than 2004. Prosoniq also admit that 90 percent of their customers are Mac users anyway. So, unless I've missed something, this announcement is really the confirmation of a decision made five years ago, rather than the result of continued PC piracy eroding profits.

Meanwhile, Microsoft (www.microsoft.com) have announced a new strategy to prevent pirate copies of their 'Games For Windows' being leaked onto the Internet before their official release date. Such is the anticipation for some products that even otherwise honest gamers will apparently download a cracked version if it appears before shops are in a position to stock it, resulting in decimated sales. Unscrupulous shops have also been known to start selling before the official release date to gain an advantage over their competitors.

Microsoft's solution is an unlocking system that makes games unplayable until a set date. Termed 'zero day piracy protection', it involves encrypting the game such that you can only play it once you've gone on‑line and received the decrypt code that only becomes available on the release date. Let's hope this doesn't catch on with audio developers: I can imagine the outcry if your sequencer needs reinstalling on a Sunday and the developer's web site is down for maintenance!