With Apple opening a new retail store in Exeter, and speculation as to when new Mac Pros might be released to take advantage of Intel's latest Penryn technology, welcome to the first (and possibly last) West Country-themed Apple Notes.

Writing Apple Notes for the February issue of SOS is always a bit of an odd experience. Right now it's December, yet by the time you read this it will not only be 2008, but two of the year's most interesting events for Mac-based musicians and audio engineers will have taken place: MacWorld and Winter NAMM. So by the time you would read any speculations from this point in time, such ruminations would also be quite redundant. Still, fingers crossed for the ultra-light MacBook Pro...

While MacWorld is traditionally a more consumer-oriented show for Apple — last year saw the now-famous introduction of the infamous iPhone — a large number of demanding Mac users are eagerly anticipating a revision to the Mac Pro that would include the latest 5400-series, quad-core Penryn-based Xeon processors. The last major change to the Mac Pro line-up was the introduction of the eight-core model (featuring two quad-core processors) just before the last NAB show in April, although hopefully we won't have to wait until the next NAB show for another revision.

Penryn is the codename for Intel's latest implementation of the Core micro-architecture, and, sadly for Wurzels fans, the code name actually refers to Penryn in California rather than Cornwall. Although Penryn isn't as significant a step forward as the introduction of the Core micro-architecture itself, there are still many significant improvements, such as the inclusion of a new set of SSE instructions known as SSE4. 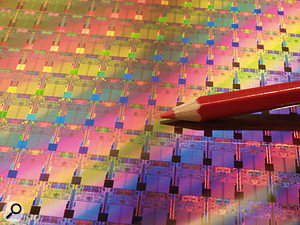 This rather neat image from Intel shows Penryn-based processors on a 45-nanometer process wafer, with a pencil that puts the size into context. According to Intel, each quad-core processor incorporates 820 million transistors.Simply put, the SIMD in SSE (Streaming SIMD Extensions) stands for Single Instruction Multiple Data, and describes a type of instruction that allows a single command to process multiple items of data at the same time. SSE instructions can process four 32-bit floating-point numbers simultaneously, which is especially useful for processing audio data, and in the past developers have been able to significantly optimise their audio processing algorithms by taking advantage of such instruction sets. (Altivec, or the Velocity Engine, which was present in the G4 and G5 processors, was, in effect, the Power PC equivalent of SSE.)

Penryn technology will become included in all of Intel's Core-based processors, but what makes the 5400-series Xeons particularly interesting to musicians and audio engineers is the combination of three numerical increases: faster clock speeds of up to 3.2GHz, faster 1600MHz front-side bus speeds, and 12MB of level-2 cache. The faster clock speeds compared to the previous 5300-series Xeons are possible thanks to Intel's 45-nanometer High-k Metal Gate Silicon Technology and obviously help the computer to work quicker, but the front-side bus speed and increased cache are perhaps more interesting, as both contribute to keeping the processor working as efficiently as possible.

The front-side bus is used for the processor to communicate with the main memory, so a faster bus helps with memory-intensive applications such as samplers, and a bigger cache enables more instructions and data to be held in a special type of memory in the processor itself, so that they can be accessed more quickly. This is especially useful for instructions used in audio algorithms that need to be constantly repeated when audio is being processed, as a bigger cache means there's more chance of these instructions remaining in a location where the processor can quickly retrieve them.

Although Apple have made no promise or announcement that hints at a Mac Pro using 5400-series Xeon processors, it seems reasonable to expect such an upgrade, given that other manufacturers are already offering Windows and Linux-based workstations using these processors. While the current Mac Pros are no slouches, one would hope that Apple won't be too far behind in offering Intel's latest technology to Mac users as well.

Garage Band 4.1.1 offers a new 'Send Ringtone to iTunes' command that makes it easy to create your own custom ringtones in Garage Band and transfer them to an iPhone.If you've ever wanted to control your Pro Tools rig from your phone (and let's face it, who hasn't?), you might be interested in an application for the iPhone called Pro Remote. Although not officially available yet, Pro Remote enables you to use the touch screen of an iPhone as a mix control surface for Pro Tools, mimicking the appearance of Pro Tools' own mixer while supporting the iPhone-like gestures, such as flicking to scroll through the mixer, and being able to orient the phone horizontally or vertically, so you can choose between better fader resolution and more tracks being visible.

Pro Remote apparently uses Mackie's HUI protocol, which means you'll presumably also need to install an application on your Mac to arbitrate the communication between the iPhone and Pro Tools. And judging from the video, the actual Pro Remote application on the iPhone seems to be running natively, meaning that, right now at least, you wouldn't be able to 'officially' install it on your iPhone. Apple currently only support third-party web applications on the iPhone that run via the Safari web browser, although the company announced last October that an SDK allowing developers to create applications for both the iPhone and iPod Touch would be released in February.

In other iPhone-related news, a minor update to Garage Band 4 has added a new feature that lets you export a cycle range as a ringtone directly into iTunes simply by selecting 'Send Ringtone to iTunes' from the Share menu. This turns Garage Band into a great application for creating ringtones, and since the ringtone business is evolving into quite a lucrative market, I wonder if Logic Pro will get such a feature. The update to Garage Band 4.1.1 can be downloaded via Software Update.

Send In The SAS

Another aspect of the Mac Pro that could benefit from an upgrade in technology is the storage system. Currently, the Mac Pro chassis can house up to four 750GB SATA drives via conveniently swappable trays, which is a big improvement from the days of the Power Mac G5; and while Apple originally showed how these drives could be used in a RAID configuration with the software-based RAID features in OS X, it's now possible to have a PCI Express-based hardware RAID controller installed with your Mac Pro as a build-to-order option for better performance. However, as we've discussed in past Apple Notes columns, RAIDs don't offer significant performance improvements for those running audio tracks (or sampler voices), although they can provide better security for your data by mirroring the same data as it's being recorded onto multiple drives. 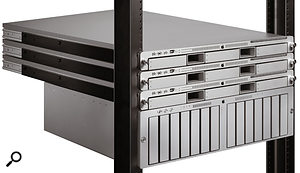 Although not recommended for audio and music applications, Apple's Xserve is currently the only Mac offered with integrated support for SAS drives.While it might be obvious, the best way to get more tracks from your storage system is to simply have a faster drive, and using more expensive SCSI drives for audio work can still provide a significant advantage. A common method of attaching SCSI drives to workstations and servers these days is via an interface called SAS (Serial Attached SCSI), which, as the name suggests, is a method of connecting SCSI drives to your system via a serial interface rather than the traditional parallel alternative. SAS uses the same type of connector as SATA, and it's possible to connect a SATA drive to an SAS controller (although you can't do it the other way around, connecting an SAS drive to a SATA controller).

Apple already offer SAS as an option in the Xserve line of servers, and when I tested an Xserve back in May 2007's Apple Notes (www.soundonsound.com/sos/may07/articles/applenotes_0507.htm), in addition to the observations made in that column, I also tested the performance of the installed SAS drives running Logic Pro 7. A single SAS drive running at 15,000rpm was capable of playing back 167 stereo 24-bit, 44.1kHz audio tracks simultaneously, which is quite impressive when compared to the 101 tracks supported by a single SATA2 drive running at 7200rpm in a Mac Pro.

However, before you consider rushing out to purchase an Xserve on which to run Logic Pro, it's worth stressing again, as discussed in May's column, that the Xserve has other factors that make it less desirable for workstation tasks, not least the fact that it was designed to be a server. The more limited display and expansion options (when compared with a Mac Pro), along with the fact that you would need a machine room or acoustically isolated enclosure to house it, are issues to consider, as is the fact that it is unsupported by developers such as Digidesign.

So a Mac Pro with SAS support would definitely be desirable for audio work. But while you can't officially order such a configuration from Apple at present, many people have commented on the fact that the extra hardware RAID controller offered as a build-to-order option already supports SAS drives. I haven't tried this myself, and so I can't confirm or recommend doing it, but with Apple's hardware RAID controller in your Mac Pro, you could in theory put SAS drives in the removable bays instead of SATA drives and enjoy a boost in performance, although you'd have to sacrifice a PCI Express slot in order to do so.

Dear Santa: please bring me a new Mac Pro for Christmas. It should have dual 3.2GHz 5400-series Xeon processors, integrated SAS support, and, oh, Blu-ray would be nice too while you're at it.

Exeter Has An Apple Store?

If there was a list of places in the world that are as far away from the Californian sense of cool as you could get, I'm sure my own home town of Exeter, located in the South West of England, would be on it. And yet, as Apple continue to open more retail stores outside of the US, even Exeter now has its own shiny Apple Store.

Perhaps surprisingly, Apple Stores have turned out to be a genuinely useful resource for Mac-based musicians and audio engineers. With Apple developing professional music products such as Logic Studio, as well as other media-related software like Final Cut Studio, it's easier to get hold of upgrades or purchase last-minute items than ever before. When you consider how long it can sometimes take to get music software updates, being able to visit your local Apple Store and walk out with something as specific as a Logic Pro upgrade is rather handy.

And even if you're not a Logic user, the Apple Store not only makes it easy to get hold of operating system upgrades, but also emergency Mac systems or repairs if something goes wrong. At least I know that when I have to go home for obligatory family visits I can still get my Apple fix and, more importantly, my MacBook Pro fixed, should the worst happen.