Tidy away unused instruments and effects and put your favourites within easy reach with Logic’s Plug-in Manager.

Over the years I have watched many successful producers taking the time to make their workspaces more efficient. With the Logic Pro 10.1 update Apple expanded the functionality of the Plug-in Manager to allow you to customise and streamline your plug-in menus. In this month’s Logic notes I will take you through these features to better organise your plug-in effects and virtual instruments in order to improve the efficiency of your workflow.

To begin, create a new project and add a Software Instrument track. Click on an empty insert slot to bring up the plug-in selection menu. Before you start customising, the menu is divided into two sections — the first is populated with Logic’s own plug-in categories, and the second is labelled Audio Units. However, once you begin customising, the menu is divided into three different areas. The first displays a list of all of the folders that you can customise, the second is the Audio Unit tab that contains all of your third-party plug-ins, and then below that is the Logic tab that contains a backup copy of the traditional layout of all Logic’s bundled plug-ins. This backup is really handy because once you have customised the folders in the main area you can still return here to the old Logic plug-in layout. So, for example, if you change the Dynamics folder in the main area to only contain your favourite third-party compressors, you will still be able to access the Logic compressors by going to the bottom of the list, clicking on Logic and then on Dynamics. 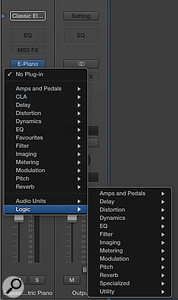 Picture 1: The new effects menu structure has three areas: the main section is a selection of entirely customisable folders, ‘Audio Units’ contains your third-party plug-ins, and ‘Logic’ contains a backup of the included Logic effects. This last section becomes useful if you have removed Logic’s included effects from the customisable folders above.

Now let’s take a look at the Plug-in Manager. Go to Logic Pro X / Preferences / Plug-In Manager. Here you will see that the Plug-in Manager is divided into a series of columns. The left-most column displays a list of folders containing Logic’s included plug-ins sorted by category, and below that you can see all of your third-party plug-ins sorted by manufacturer. Clicking on a folder on the left-hand side then filters your view to show the plug-ins in that folder. Let’s begin by going to the left-hand column and clicking ‘Show All’, located at the top. Browse through all of your plug-ins and untick the ones that you can’t or don’t use. This will start reducing the number of plug-ins available from Logic’s insert menu and leave just those you want, making browsing a whole lot easier. This is particularly useful in those situations where you have had to install a large plug-in bundle but only wanted to purchase a few of the effects. Disabling effects that you don’t own should clean up your folders and ease navigation. 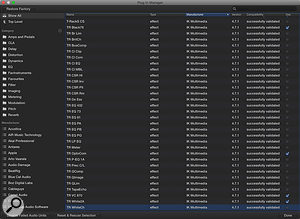 Picture 2: You can use the Plug-in Manager to disable plug-ins you are not using or haven’t purchased to clean up your plug-in list. Here I have removed the IK Multimedia effects I don’t own.

Next, let’s create a new plug-in folder into which we’ll sort our favourite plug-ins. On the left-hand side of the Plug-in Manager, create a new folder by clicking the plus button located next to Category. Name the folder Favourites. If you need to rename it at any time simply double-click on it and type in a new name. From the left-hand side, click ‘Show All’ to display your entire plug-in list, navigate to your favourite plug-ins and drag them into your Favourites folder (see picture 3). 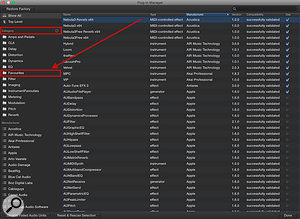 Picture 3: Create your own plug-in folders using the plus button next to Category. Here I have created a folder called Favourites. To add plug-ins to that folder simply drag them from the list area on the right-hand side. Once you close the Plug-in Manager the Favourites folder and the plug-ins you put in it will be in your normal plug-in insert menu.

Once you have finished, close the Plug-in Manager and return to your Software Instruments channel strip and again click on an empty insert slot. You will now see that your new Favourites folder containing your chosen plug-ins is easily accessible from this menu (picture 4). 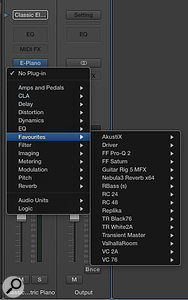 Picture 4: The Favourites folder we created now appears in the Insert Plug-in list. Here you can see my favourite effects plug-ins located inside it for easy access.

You can return to the Plug-in Manager at any time to add additional folders and to further customise your plug-in menu structure. For example, I have created a folder dedicated solely to the Chris Lord Alge Waves plug-ins because I use them so regularly. You can also create folders for your third-party software instruments. You may also wish to create another ‘Favourites’ folder or group your instruments into categories, such as Virtual Analogue, for example — how you structure your files will really depend on how you work. To create software instrument folders simply go through the same process as before using the plus button next to Category to create a folder, name the folder and drag the software instruments into it one by one.

The Plug-in Manager also allows you to remove folders or plug-ins you don’t use from the customisable Category section. To remove a whole folder simply control-click on the folder and choose Remove. For example, I hardly ever use the Metering folder, so that was one of the first things to go from my customised plug-in list. Remember that all removed folders will still exist at the bottom of the plug-in menu inside the Logic tab, in case you should need them in the future. You can also return your Insert Plug-in menu to the factory default by clicking on the Restore Factory button in the top left-hand corner.

Need to keep an existing folder but don’t like all of the contents? You can also customise existing folders by removing some of the factory plug-ins and replacing them with your favourite third-party ones instead. From the Category section click on the Dynamics folder. To remove redundant plug-ins from the folder hold down command and click on the plug-ins to select them. Once your selection is highlighted, control-click on any one of them and choose Remove from the pop-up menu. In my Dynamics folder I have removed everything except for Logic’s Compressor and Limiter. Once again, click the Show All option to display all of your plug-ins and then drag and drop your chosen third-party compressors into the Dynamics folder. You will now have a Dynamics folder that closely resembles the dynamics plug-ins that you use regularly, rather than an arbitrary list of what came included with Logic X (Picture 5). 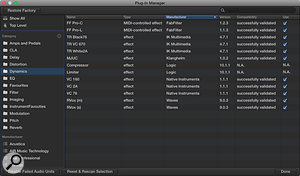 Picture 5: My new Dynamics folder made up of both Logic’s own plug-ins as well as my favourite third-party ones.

It is also possible to create folders within folders, which is particularly useful if you have a lot of plug-ins. For example, you might want to create a folder dedicated to Plate Reverbs and locate it within the existing Reverb folder. In this case you would need to name your new folder using the protocol Reverb:Plate. This will automatically situate the Plate folder as a sub-menu of the Reverb folder. Now just drag and drop your chosen plate reverbs in, as before.

It is good practice to go through all your plug-ins and sort them for easier navigation. Admittedly, it’s the sort of task that is a little tedious if you have a lot of third-party plug-ins, but once you have taken the time to re-organise your plug-ins you will be glad you did! It’s guaranteed to give you back some of your precious time to work on the truly fun stuff.