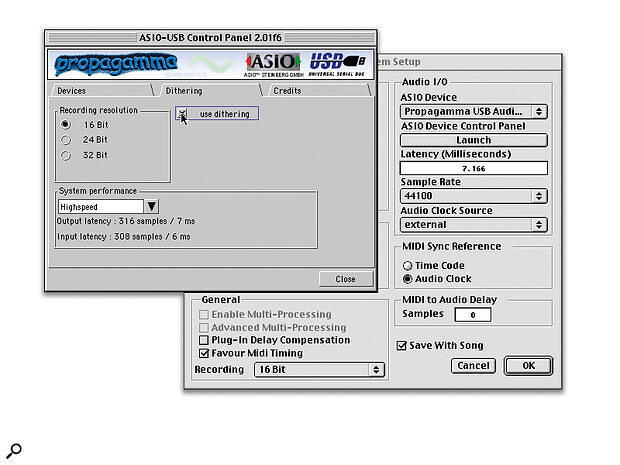 Propagamma's new USB ASIO drivers can reduce latency to as little as 7mS.

I've learned a couple of valuable lessons this month, in the course of travelling around various parts of Europe on a video shoot. In tandem with FireWire‑equipped DV cameras, portable Macs (an iBook and a new Titanium Powerbook) have proved absolutely invaluable. However, when the iBook's battery got run down to zero one too many times, I discovered the wisdom of never allowing it to run out of power and shut itself down halfway through doing something — always put it to sleep yourself before this happens.

On this occasion, when the iBook was re‑powered it couldn't see its own hard drive, and therefore its OS. On power‑up, it simply sat there alternating a question mark with a picture of the system folder, despite strenuous efforts to make it find the OS on the hard drive. Take it from me, never travel without the OS CD‑ROM for your model of computer (those for the G4 PowerBook, G4 desktop and G3 desktop which were available in the Czech Republic didn't work at all). On return to Zurich I had the problem fixed in 15 seconds, once the iBook had been fed the right OS CD.

Fortunately, the Titanium Powerbook offered the best possible back‑up. Upgrading its version of QuickTime to Pro version 5 was the best move we could have made, as the video director soon found he could use this to preview four streams of video simultaneously in one window (as usual, my over‑ambitious nature means that from my first‑ever video shoot we were trying to make a four‑camera‑angle DVD).

And the usefulness of the Titanium didn't stop there. The director used iMovie 2 to check rushes every night, as well as to write shooting scripts for the next day. Desktop DV is a very empowering technology, but it is nothing compared to mobile DV production. With so many bands tired of record company incompetence, indifference, or just plain dishonesty, and looking to the Internet to promote themselves directly, this technology will be crucial. Bands will have to start making their own video material and putting it on their web sites, and Apple users can rest easy knowing that their platform of choice is about five years ahead of the opposition. With a couple of DV cameras, a portable Mac and a Superdrive‑equipped G4 733 back home to master your DVD on, the only limits are your imagination and your production budget. 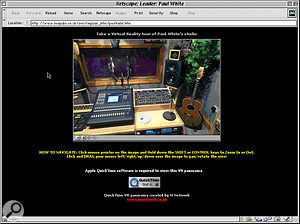 Those poor misguided souls who follow my writing assiduously (you can get medical help, you know!) will remember that in my series on music on the new Macs last year, I singled out the USB ASIO drivers from German software house Propagamma as one of the lights at the end of the USB audio tunnel. While the drivers delivered with the Roland and Tascam USB interfaces I looked at produced latency of more than 30mS, even under ASIO, those which Propagamma were selling for $30 on the Internet (and certain manufacturers, such as EgoSys, Media Assistance and Swissonic, were supplying free with their hardware under license) were able to get USB ASIO latency down to 14mS.

Another encounter with the Tascam US428 recently allowed me to verify that latency with that unit has improved to the same sort of level, and when I visited the Propagamma web site about six weeks ago I was pleased to discover that they were proudly claiming 7mS latency for their drivers — then horrified to notice that it was only on the PC. I immediately contacted Markus Medau of Propagamma, to find out what the story was. He explained that when Propagamma recreated the driver for USB ASIO on the PC they had made some refinements and tightened up the code, and that their very next mission was to rewrite their Mac driver with the same 7mS latency.

This was a relief to hear. While some people seem quite happy with a latency of 14mS, others cannot brook it for a moment, especially given the fact that latency can make it impossible to use plug‑ins while recording. And, as Propagamma had promised, version two of their Mac USB ASIO driver went live on their website for download on 31st May; I was told that customised versions of the updated driver for licensed hardware products would be available through the relevant manufacturers shortly. He emailed me the drivers for the Swissonic USB Studio, and in 'Superfast' mode (which does need a pretty fast computer, like the Titanium Powerbook) they have indeed reduced latency to 7mS on the Mac as well.

New FireWire Chips On The Horizon 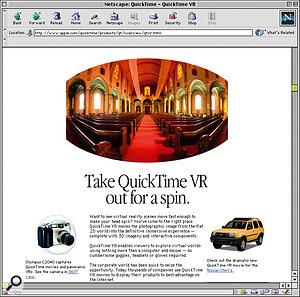 Apple's QuickTime VR audio/video‑playback technology allows virtual tours of any location to be created, such as Paul White's home studio (below, left) on the SOS web site.

The recent AES (Audio Engineering Society) exhibition in Amsterdam brought more encouraging news of FireWire chip development. First, there was an opportunity to see the results of the Yamaha‑Otari cooperation on the second generation of mLAN chips (which will remove, once and for all, the 8‑channel limitation on audio I/O per device that is a 'feature' of currently shipping audio devices — although you can obviously have something in excess of 100 channels on the mLAN buss). NEC were also showing their long‑distance solution for FireWire, opening it up for all sorts of installation and live‑sound applications.

But my post‑AES detective activities have uncovered other new chips being developed to really unlock the audio potential of FireWire. Sitting next to me at the IEEE 1394 Standards Committee meeting I attended recently was a man from a company called BridgeCo, talking very seriously about work on best practice implementation. On my return from the Czech Republic I found an invitation in my email to visit them and learn a bit more about what they're doing. It would be premature to give full details of what that is at this stage (not least because I haven't quite got my head around it yet) but they're talking about 128 channels of audio and a long‑distance solution on a single chip with (most importantly, to my mind) full mLAN compatability, and they're working with Digital Harmony's DHIVA (Digital Harmony Interface for Video and Audio) standard — see www.digitalharmony.com for details. While they will not be selling direct to the public, but instead providing chips to manufacturers, if they get this product to market in a timely fashion it will have a serious effect on the capabilities of the typical FireWire audio device (not to mention its capability to handle the sort of bandwidth which video needs). More details when I have them — and permission to talk about them.

The future for FireWire on the Apple platform is looking very rosy indeed. Once again, I am indebted to Kendal Wrightson and Ian Steele for news on Apple Developer Conference presentations of mLAN in OSX, which we previewed in last month's column. They forwarded me a report from Glenn Gutierrez on the mac‑powerbook@yahoogroups.com email list for Powerbook users, in which Glenn describes watching a QuickTime clip from the Conference. In the clip, Doug Wyatt and Chris Rogers of Apple discuss the support for MIDI and audio that's built into OSX. Glenn notes that Doug Wyatt, who wrote OMS (the Open Music System) while he worked at Opcode, demonstrated new MIDI APIs (Application Programming Interfaces) which programmers can use in their applications. He also mentions that "much of the new stuff appeared to be similar to using OMS", and comments that "the inherent timing problems associated with pre&#150;emptive multitasking are overcome by buffering and time‑stamping events, not unlike custom methods devised by Emagic, Steinberg and MOTU for their own USB MIDI hardware."

The theory was then put to the test with a demo on a Pismo PowerBook, of "live MIDI Thru to two instruments simultaneously, busy sequence playback, and a combination of both." Glenn says that the timing of the playback was good, with no stuck notes.

Chris Rogers' part of the demo covered OSX's audio architecture, which is described as "completely modular and extensible", with objects called AudioUnits that appear "similar to what you'd find in MAX or Reaktor." The AudioUnits can provide DSP processing, for such things as reverb, resonant filtering, ring modulation, mixing and MP3 codecs, and "can accept input from, or send output to, the external world, as well as multiple other objects." A higher‑level AudioUnit called a MusicDevice works as a software synth. OSX even has an integral multitrack sequencing engine, with "high‑resolution" event timing and a tempo‑mapping facility. Editing can be done during playback, and tracks may loop independently. A new QuickTime file format, which also supports MIDI files, is on the offing, for saving sequences.

A sequencer application could be made using just these APIs, according to Chris Rogers, who then went on to demonstrate one he made earlier, playing sequenced drum hits, filter sweeps and level changes from "a two&#150;page program he threw together. Its three tracks drove three individual AudioUnits (at least one was a MusicDevice) to play the sounds and modulate them."

Mention was also made of the DLS (DownLoadable Sounds) format, which replaces QTMA components (QuickTime Instruments) and "includes PCM samples in the package, along with a sequence... and data for envelopes, LFOs, and other typical sampler performance settings."

This month's featured web site, www.hradkarlstejn.cz/noflash_en/..., is not strictly music‑related, but it is a very good example of what could be done with QuickTime VR if only people took the time. I have long thought that no‑one has really explored the potential of QTVR, with its greater ability than straight video to 'explore' a space fully, so it was nice to finally discover a site which really makes full use of it. Someone from the Czech Republic whom I met at AES Amsterdam sent me the URL after I told him I was going there to film in castles. The site is for one of the grandest castles out there, Hrad Karlstejn. I don't suggest that you visit it just to bone up on Austro&#150;Hungarian castle design, however, but to check out the virtual tours of some of the rooms. (Also see the Apple web site, www.apple.com, pictured right, for more on QuickTime VR.)

Ever since I first saw QuickTime VR demonstrated, using the famous footage of the Golden Gate Bridge more than 10 years ago, I have thought that it's one of the most under‑used technologies out there, but these stunning 360‑degree room tours make the point better than anything else I have ever seen done with QT VR. Why estate agents and other people who are selling/renting out property haven't jumped on this technology, I don't know... and think of the applications in our industry. Just imagine this technology used to let you wander virtually around a famous recording studio at your own pace, checking out the racks for interesting bits of signal processing gear or sound modules, or even the gold discs of previous clients on the wall. In fact, there's a QT VR tour of editor Paul White's home studio on the SOS site at https://web.archive.org/web/2015..." target="_self if you care to check it out.