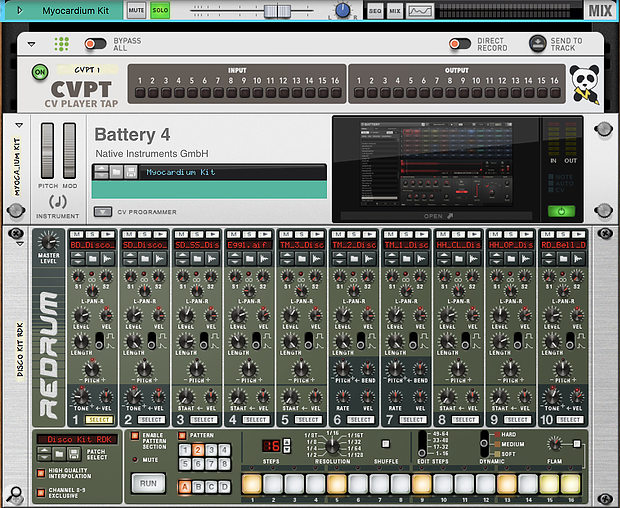 Screen 1: With the CVPT Player connected, you can sequence plug‑ins like Battery from Redrum or other Rack devices.

How to connect multi‑channel gate sequencers like Lectric Panda’s CVPT to any instrument or plug‑in in Reason.

A couple of months back we looked at the Drum Sequencer device from Propellerheads. This is one of the new Player‑type modules that work in tandem with other Rack instruments. Drum Sequencer adds pattern‑based sequencing to any instrument that doesn’t have its own built‑in sequencer, such as the Kong Drum Designer, or any sampler‑based drum kit. It’s great and has some really clever features but also has some limitations. Many Reason users are still wedded to Redrum’s friendly X0X‑style sequencer, and others have adopted third‑party Rack Extensions for drum sequencing, such as Propulsion, Elementary and Grid64g. These all generate individual gate outputs for each drum sound that you want to trigger.

You can already connect separate multi‑channel sequencers to a Rack instrument if it provides multiple inputs on its rear panel (as Kong does). But wouldn’t it be nice if you could use these pattern sequencing tools with any instrument that uses MIDI notes for input? This would open up Rack sequencing control of kits in Reason instruments like NN‑XT or ID‑8, or any VST like NI’s Battery. This would also mean you could audition and hot‑swap drum kits of any instrument type without any manual re‑cabling. Well there are at least two different genius add‑on devices available that provide this service. One option is free, the other costs £35$39, but is more functional and customisable.

I briefly touched on the first of our solutions last month: Lectric Panda’s CVPT. This is one of the first third‑party Player devices, and it’s free! CVPT (CV Player Tap) lets you connect CV/Gate signals into and out of the Player stack connected to any instrument. It can also split out a MIDI or Player input to multiple CV/Gate voices, an interesting prospect for polyphonic modular synth building that we’ll have to explore another time. In the simplest case, though, it lets you take a gate and/or note signal from any Rack device and pass it directly to the instrument it’s attached to. For a single source this would be generally redundant, as most devices have a CV/Gate input. But the special ability that both the devices we’re looking at this month have is to merge multiple CV/Gate inputs into a single output. 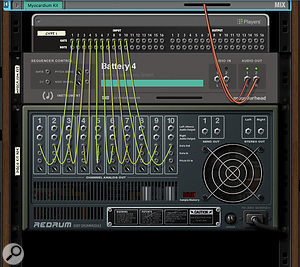 Screen 2: With no note inputs present, CVPT assigns notes chromatically from C1 to the outputs.In Screen 1 (above) I’ve created an instance of Battery and snapped the CVPT Player to it. I’ve then created a Redrum with no audio connections (by Shift‑dragging into the Rack). Screen 2 shows what’s happening around the back. The individual Gate outputs from the Redrum are connected to the first 10 inputs on the CVPT device, and that’s it! If I load a Battery preset and start adding step triggers in my Redrum pattern sequencer I should hear results straight away.

But how does it know which MIDI notes to play, with only a Gate trigger? Well the clever people at Lectric Panda have set CVPT to output the Redrum/Kong standard trigger notes if no other Note input is connected. This will give you chromatic MIDI notes from C1 upwards, pretty much the standard for most drum instruments including Battery. Velocity is preserved from the Redrum pattern, and you can also play sounds freehand from any MIDI source focused on either the Redrum or instrument. The sound audition buttons on the Redrum work, as do channel Mute and Solo, and the trigger/hold envelope switches. Just like working with Redrum stand‑alone, you can create four banks of eight patterns, up to 64 steps each, and program or record pattern changes in the main Reason Sequencer. 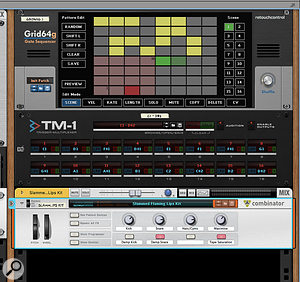 Screen 3: Robotic Bean’s TM‑1 Trigger Multiplexer lets you map gate triggers to specific sounds on your RE or plug‑in instrument.CVPT’s simple CV/Note merging is one part of its wider feature set, but Robotic Bean’s TM‑1 Trigger Multiplexer is specifically designed for this application and benefits from some additional features, in particular note re‑mapping. I’ve been using this device to drive Battery and Combinator‑based kits with Redrum’s pattern sequencer, and also with Retouch Control’s Grid64g hooked up to a Launchpad (Screen 3).

TM‑1 is a standard Rack Extension, not a Player, so after installation you’ll find it in the Utilities category of the Browser. The other difference is that instead of piggy‑backing on another instrument, it’s a free agent in the Rack. This means that the merged note/trigger information emerges on a ‘physical’ CV/Gate pair that you need to connect manually to the instrument you wish to sequence (see Screen 4). 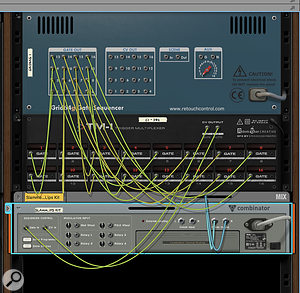 Screen 4: TM‑1 merges multiple gate triggers to a single CV/Gate pair.The big advantage over CVPT is that TM‑1 provides additional control over what happens to each trigger input. The front panel shows a grid of 16 cells representing the individual gate inputs. Each cell shows the MIDI note that will be produced by gates received at that input. You can drag up and down on these notes to change the values, and if Audition is enabled you’ll hear what sounds will be triggered on the connected instrument. This allows you to assemble a kit quickly from a larger pool of sounds.

An alternative workflow is to engage the Learn mode for a cell, then play notes into TM‑1 from your MIDI keyboard or pad controller. The notes will be passed through so you can audition sounds on the destination instrument. When you find the sound you want, disengage Learn and the trigger channel will be set to the last played note. Each trigger can be given a custom name, and once you’ve configured your note mappings you can save them as a patch for re‑use.

As well as the basic utility of being able to connect a gate‑based Rack sequencer to a MIDI‑based drum instrument, TM‑1 offers some additional performance features. It has mute and solo buttons on each cell, and master mute/solo clears. These become interesting when you consider that the states of these buttons as well as the sound mappings are stored with patches, making it possible to save and recall rudimentary scenes. Note assignments can also be automated, offering the possibility of per‑step sound changes after the fashion of Elektron devices or Novation’s Circuit.

One thing to note is that while CVPT simply merges incoming gates and notes and passes them on, TM‑1 re‑generates every event as a 10ms trigger. In many cases this doesn’t make any difference as drum machine sounds typically default to single‑shot trigger mode. But any sounds that are in a held ADSR envelope mode will cut off almost immediately.

TM‑1 is a very reasonable £35$39 to buy, (or 10 percent allowance on my Standard £8$9 subscription pack). You can of course download it for a trial period before making the commitment, but I’d highly recommend it.