Reasons To Be Cheerful: v3 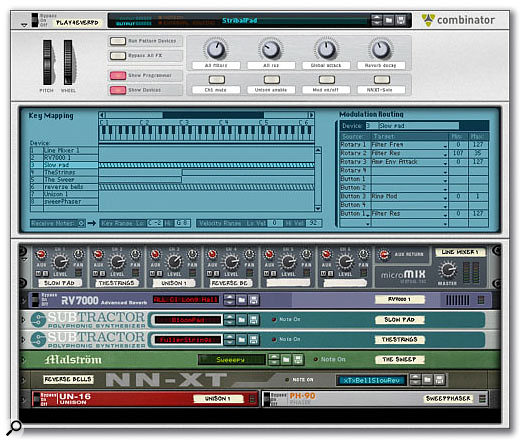 The new Combinator turns Reason v3 into a super performance synth. Any device in the Reason rack can be combined, layered and controlled from one handy window.

Version 3 of Reason is officially on the way, adding some high-spec new devices and improved operational features.

It's been buzzing for a while, but the big news this month is the official announcement by Propellerhead of Reason V3. There's no definite release date as yet, since the software is still in beta-testing (as I write). But, as with the last couple of upgrades, Propellerhead have been punting for beta-testers via their web site, so that some of the user base will have a chance to contribute to the final product. In fact, it was largely the call for beta-testers that alerted users to the fact that something might be on the way!

Many of you may know that, before its original release, Reason was meant to be more of a live performance tool than it turned out to be, and indeed a handful of functions in the program are left over from those plans. With the new Combinator device, Reason moves back to its performance roots by allowing as many synth, sampler and effects devices as you like to be joined together and to work as one single performance instrument — just like a workstation synth. Combinator even lets you integrate Matrix pattern sequencers and Redrums into the resulting 'Combi' patch. Once saved, a Combinator patch can be recalled with all chosen devices loaded instantly and the signal path intact. A Combi could even consist of just effects — its back panel offers interface jacks that let you use Combinator as a single giant effects processor

Devices can be layered, split across MIDI key ranges and set to respond to velocity splits, and ease of use is improved by a large clear display window. The Combinator device even offers a handful of global assignable knobs and buttons, to let you tweak multiple parameters across several devices in a Combi.

One area in which many Reason users show considerable ingenuity is mastering — audio sweetening a Reason mix to sound as fat, vibrant and exciting as possible, without resorting to external hardware or software processing. The tools are there to do the the job in v2.5, but Propellerhead have just made it a whole lot easier, with the MClass suite of 'pro level' signal-processing tools.

First up, the MClass Equalizer offers high and low shelving bands, two parametric bands and a low-cut filter. Great graphic feedback of EQ curves is provided by a large display, and the modelled circuitry is designed to offer you the tools to add 'bottom' or 'zing' in as musical a manner as possible.

Then there's the Stereo Imager, which is a bit of a surprise. Not only does it provide control over the stereo width of a Reason mix, it does it over high- and low-frequency bands. The Compressor in the suite is several levels above the original COMP01. It's a single-band device (though multi-band configurations should be easy to set up), complete with side-chain access to allow ducking and de-essing to be undertaken, and a smooth 'soft-knee' operation mode.

Finally, the Maximizer works with perceived volume, aiming to add punch to your mix without unwanted artifacts. Reason is a digital system, so the Maximizer 's best trick — a look-ahead option — should be no surprise. However, this one option should allow you to 'brick-wall' the level of your mixes without distortion, since it's checking incoming level peaks before they actually happen! Want a more 'round' sound to your maximized mix? Enable the soft-clip section.

I haven't even covered all the V3 features yet — it also adds 'out of the box' integration with external MIDI controllers, a new free-text browser for digging around your sound bank, and a new, even larger factory sound bank. There's another new device, too: the Micromix stereo line mixer, for sub-mixing in or out of a Combinator Combi. This is a simple device, but not as simple as a Spider Audio. Six input channels have level, pan, mute and solo controls, plus one aux send.

In addition, it'll now be possible to record automation on multiple tracks, there are new mute/solo options on the sequencer, and sample loading is to become much faster. About the only new 'feature' that might be sad to hear (for Mac users, anyway) is that, based on the preliminary spec for Reason v3, it would appear that the software will no longer run under Mac OS 9. There, that's your reason to upgrade!

Visit www.propellerheads.se to hear some audio demos and read about upgrade paths. This will be a chargeable upgrade for existing users, costing 99 Euros/US$129, or about £69. However, the list price of Reason 2.5 has recently been cut by that amount.

I'll save you the trouble of reading the main text about the new features of Reason V3 again. On the basis of information released so far, audio recording hasn't been added to the Reason studio. Propellerhead seem quite steadfast on this issue, though surely it must come eventually. Even synth workstations, which Combinator is taking a pop at with its super-performance setup capabilities, are moving more in the direction of adding audio tracks alongside synthesis and sampling. I don't know what other Reason users feel is missing, but so much effort is expended in trying to create real-time arpeggiation that I'd also like to think that the Props will add a proper arpeggiator device at some point.

The reliable Reasonfreaks team (www.reasonfreaks.com) have just released a top free Reason Refill, dubbed RF01. It's specifically for the NNXT advanced sampler and consists of a 10MB collection of multisampled raw synth waveforms and ready-made patches. The waveforms, which play back in high-quality 24-bit, seem to derive from soft synths rather than hardware originals, but that certainly doesn't negate the hard work that's gone into the set.

First of all, audition the supplied patch collection: browse through them all, or have a look at the sets broken down into themes. These include pads, bass, leads, organs, rhythmic and noise FX. Then move onto the folder labelled ' NNXT Oscs'. Here you'll find the tidily multisampled raw oscillators, including many layered for pulse-width and phasey effects. There are several of each sawtooth, square, triangle and sine-wave patches, with two-oscillator varieties simulated again by layering.

Creating your own patches involves choosing an NNXT 'Osc' patch that most closely represents the oscillator sound you want, then tweaking NNXT parameters, taking advantage of this device's very powerful synthesis engine. Should you want to use a combination of 'oscillators' that isn't provided in a preset, you can simply open two NNXT s and load one of the patches you want to merge into each device. Now highlight all the samples in one NNXT patch, copy them, and paste them into the second NNXT. The new patch (which you should make sure to save immediately, under a new name) will consist of both sets of 'oscillators'.

It's then possible to use NNXT 's Grouping function to apply different synth parameters to each 'oscillator', if desired. If the respective waveforms aren't already grouped automatically, highlight the ones that should make up each group, using 'Group Selected Zones' under the Edit Menu. (To select a group, click in the slim column to the left of the waveform list; this will highlight all the grouped waveforms.) Any synth-parameter tweaks will now apply to all the grouped waveforms. (Don't forget NNXT 's global offset parameter controls: they can provide you with quick tweaks for any patch you're currently editing.) Reasonfreaks even provide a handy little PDF that goes into more detail about creating patches from scratch with their raw material.

This is a very worthy download, covering most analogue synthesis basics in a way that's different from Reason 's own Subtractor synth. In total, the set offers 21 waveform types, 80 NNXT oscillator patches, 250 further patches, and 17 Reason Song templates. The last adds effects and/or Matrix pattern sequencers to patches from the Refill, to give you some help in exploring the collection's potential. The 'freaks are also encouraging the Reason community to create patches with this new Refill, and post them at the site. In fact, there's already a download for use with this Refill — the bottom-heavy Xplosive Bass. Not bad for nothing: all you have to do is register! The collection can also be downloaded from Propellerhead's site, but again, downloads are for registered users only. 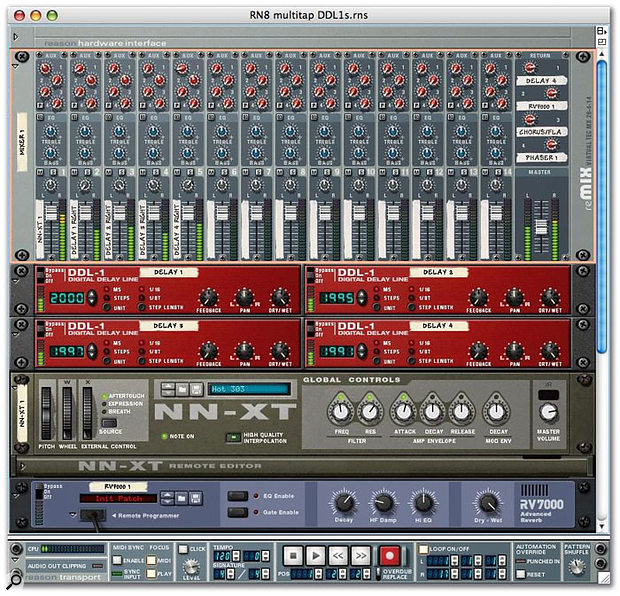 A simple multitap delay setup. The DDL1s are linked via the left ins and left outs, with their right outs patched to Remix input channels, to allow each tap to be panned and treated independently. Incidentally, the NNXT has a patch from the Reasonfreaks RF01 Refill, mentioned in the main text, loaded.

There Will Be A Long Delay

I love playing with delays, tempo-sync'd or otherwise. Delay, or echo, seems to me to be the quintessential electronic music effect, and Reason, with its DDL1 and the echo/delay algorithm options in the RV7000 advanced reverb, is a prime environment for working with delay effects. In fact, it was playing with the RV7000 's multitap delay algorithm that reminded me that a sort of multitap delay can be created with multiple DDL1 s. Simply patch, for the sake of example, an aux send out from a Remix to one DDL1 and pass that DDL1 's output to the input of a second DDL1, the second's output to a third's input, and so on for as many delay taps as you would like. You could stop here: set each delay's feedback to '0', ensuring it has a completely wet output, whack the delay time up to maximum (2000ms) and enjoy some really long, Frippertronic-like delays. Even the RV7000 delays max out at 2000ms, so a way to access even longer delays is welcome. (Note that the feedback parameters on any devices in the chain won't work in the same way as if the long delay were produced by a single device.)

Alternatively, you could take the next step, which is a bit fiddly but worth it. DDL1 is essentially mono, so repatching its right audio output to a Remix input channel has no effect on what it produces. However, doing this does give us complete control over the level, pan, EQ and individual effects processing for each of our 'taps'. The last DDL1 in the chain will still output a delay at the maximum time of all linked delay devices. The RV7000 's multitap algorithm does offer some of the same kind of control, but the final effect is not quite the same.

Work with tempo-sync'd delays instead of absolute time and you'll find some excellent rhythmic material that can't be replicated in any other way coming from your Reason rack . Use long or short delays, as befits your current track, and for more variety add an RV7000 to the chain, using its own multitap delay or echo algorithms to spice up the delay mix (why not try the reverse algorithm to add some real bizarreness?). Settings such as diffusion, which add a nice, reverb-like fuzziness to delay and echo taps, aren't available on the DDL1, and can help take some of the dryness from a delay-only effect chain — although dryness, of course, may be entirely what you're after!