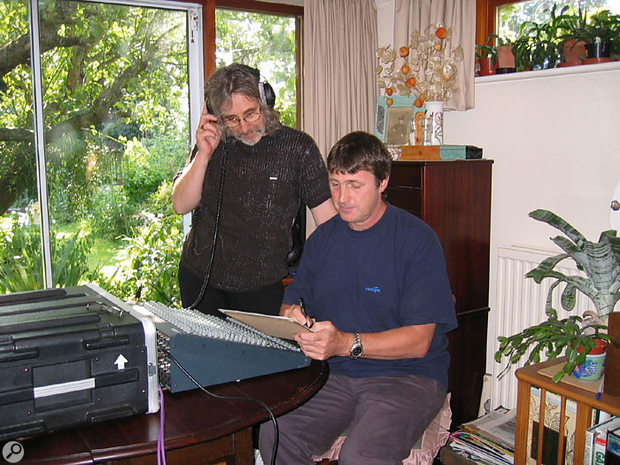 Recording acoustic keyboard instruments in a home environment can be pretty demanding, but with a little care you can still get professional results.

Following our Studio SOS visit to Gordon Giltrap back in SOS October 2003, Gordon asked me if I could help with a project he was working on. His plan was to record a piano album based on interpretations of his own guitar compositions, where his friend Richard Leigh Harris would play the piano, while Gordon acted as musical director and producer. The album would also include some tracks on harpsichord. As Richard has a rather nice Steinway piano and a double-manual harpsichord in the front room of his Oxford home, Gordon decided to record the album there. I suggested that we take a purist approach by recording the instruments using a single Soundfield microphone set up to behave like a pair of coincident cardioid microphones. We could use my Alesis ADAT HD24 as a two-track recorder at 44.1kHz, 24-bit resolution and then transfer the finished files to Apple Logic for editing and mastering.

Setting Up For Harpsichord Recording

Richard's home has one long room on the ground floor extending from a bay window at the front to French windows overlooking his garden at the rear. The piano is located near the bay window, while the harpsichord is positioned against a side wall at the other end of the room, close to the French windows. The only practical place to set up my recording equipment was on a table opposite the harpsichord, and to facilitate monitoring I connected up my Alesis 3204 mixer, which was used as little more than a glorified headphone amplifier. The Soundfield mic's decoder box plugged directly into channels one and two of the HD24 and I also set up my pair of Mackie HR624s, driven from the mixer, so that we could all listen to the playbacks. 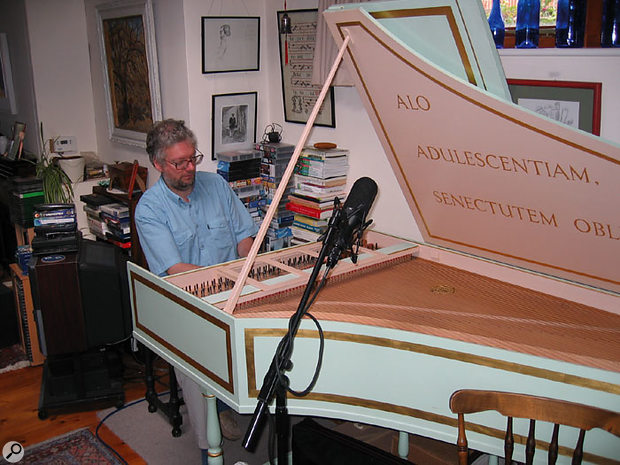 The final position of the soundfield mic for the harpsichord recordings (played by Richard Leigh Harris).

The harpsichord recordings were tackled first, and a well-balanced sound was achieved by positioning the mic about 18 inches from the edge of the instrument about half way up the open lid. By aiming the mic roughly at the hinge at the back of the lid and setting it up around a third of the way back along the instrument (from the keyboard end), the high and low strings were captured with a good natural balance and the playback tonality sounded essentially the same as we were hearing in the room.

The only technical problem was that, due to the close proximity of the recording setup to the harpsichord, I was concerned that some of the drive noise from the HD24 would end up on the recording. Our simple solution to this was to build a tent of towels over the machine in such a way as not to block off all the airflow. This didn't silence the machine completely, but the noise levels were now negligible. In fact our main noise worry turned out to be the sound from outside, as Richard lives on a side road that carries some traffic, and his windows are not double-glazed.

Richard had engaged the services of a piano tuner to get the piano and harpsichord ready for our arrival, but once we started recording, we noticed that one of the lowest harpsichord notes had gone slightly flat, so Richard had to find the wrench and retune it. This meant re-recording a couple of pieces. Richard was working from a book of guitar transcriptions of Gordon's music, and some on-the-fly re-arrangements had to be made to get the material to work for harpsichord. We ended up typically recording three versions of each piece, with some additional introductions and short bits that we could use to patch up any sections where we thought there might be problems. This part of the session went without any further hitches, so when we broke for lunch, I backed up the recording drive on the HD24 to its second drive — just in case! 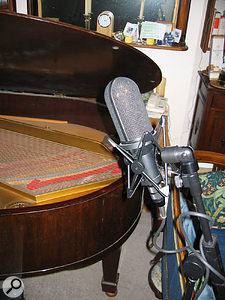 Because of the dimensions of the room, no conventional mic position could be found which offered an uncoloured sound. Therefore, after some experimentation, the final mic position ended up being at the foot of the piano, as shown from two angles here.

When it came to recording the piano, the traditional mic position didn't work, as the room was only two or three feet wider than the piano on each side. Ideally I'd have liked to set up the mic around five feet from the side of the open lid with no obstruction behind, but this clearly wasn't going to be possible — at least without a wrecking ball, a couple of RSJs, and a serious carpet-cleaning bill! I tried getting the mic as far away as the wall would permit, but the proximity of the wall to the microphone really coloured the sound, so I decided to try miking from the tail end of the piano instead. For this, the lid was fully open and the mic around 18 inches from the end of the piano, about 12 inches above the piano body. This produced a well-balanced and tonally neutral sound, but it was obvious that some 'concert hall acoustics' would have to be added in post-production.

Almost as soon as we started recording, we discovered that one of the piano pedals was squeaking quite loudly, and no amount of soap or candle grease would stop it. The problem was clearly inside the pedal housing where we couldn't get to it. After a little experimentation, we found that by pushing the right pedal to the left while operating it, we could reduce the squeak, so after several futile experiments with elastic bands, we resorted to the simple solution of binding both pedals tightly together with Gaffer tape. This still allowed sufficient vertical motion for the pedals to operate independently, but exerted enough sideways pressure to cure the squeak. We had to start one tune again after an Argos home-delivery truck rumbled past just outside the window, and we also had to take a couple of enforced breaks when a car alarm went off down the road, but on the whole the level of noise intrusion was surprisingly low.

The final mic position, viewed from a different angle.

As with the harpsichord pieces, we recorded around three takes of each piano piece plus as many variations and patch-up pieces as we thought we might need. Richard also tried alternative interpretations of some of the songs, so we ended up with quite a lot of material to choose from.

All the recorded material was transferred to my Mac using the excellent Alesis Fireport, so I ended up with one long stereo track for each of the four half-day recording sessions. Gordon listened to all the material and made copious notes before we started editing. Most of the songs needed at least two or three edits to compile a best version or to avoid noisy pedals on a quiet intro, but some of the more challenging pieces needed significantly more. We even dropped in a single note at one point! 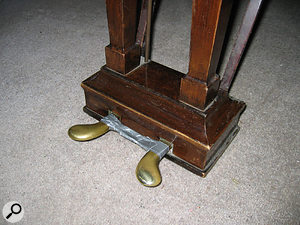 Gaffer-taping the two pedals together stopping them from squeaking, and ruining the recording.

However, the procedure was the same in each case, using Logic's Scissors tool to separate the clips we needed to insert, then cutting holes in the main track to drop them in. As ever, some fine-tuning of the edit points was necessary, and the zoomed-in waveform view helped line up note transients. Occasionally even our best shot at an edit didn't work out, so we had to move the edit point a note or two back or forward to find the most seamless transition. During this process, I made extensive use of Logic's Object Colours facility to identify the various clips and takes, and once a track was assembled, I used a very short crossfade over most edits to avoid the possibility of an audible glitch. Usually a fade of as little as 50ms will achieve this.

As each track was completed, it was bounced down to a single stereo file ready for adding effects and compiling. Because they were so many edits, and because for some songs completely new arrangements needed to be created from the material we had, the editing took around a day and a half to complete satisfactorily. One tune, 'Giltrap's Bar', was created out of numerous snippets taken from our various takes, with the best phrases occasionally repeated. Gordon was initially concerned that this particular tune wouldn't translate well to piano, but once we'd compiled all the best bits, we both felt we'd arrived at something exceptional and yet still natural sounding.

Gordon was also a little worried that the sound of the piano damper action was too pronounced, which is often a problem when pianos are recorded in a small space where the sound doesn't have a chance to breath. However, when auditioning the recordings with a suitable concert-hall reverb applied courtesy of Logic's Space Designer convolution reverb, the overall sound gelled really well and sounded much more natural. The straightforward concert-hall reverb was used for the more conventional piano pieces and to a lesser degree on the harpsichord pieces. A couple of the more ambient tracks were treated with a very low-level repeat delay (Logic's Tape Echo) combined with a more generous reverb to give them a floating, shimmery quality. For these tunes we chose a 3.3-second cathedral reverb coupled with a delay (with feedback) of around half a second.

Gordon also felt that the overall piano sound should be a little more sparkly to give the album a contemporary feel, and it turned out that a very subtle application of Logic's Exciter plug-in was the best way to achieve this. Its filter was set to around 3kHz and then the Harmonics control was turned up to 14 percent. The final plug-in processor was the Waves L1 limiter, just to ensure that no peaks escaped our notice. L1 also allows the gain to be adjusted relative to the limiter threshold, so it's a convenient way of getting the track levels maximised.

Each track was set up with the required amount of reverb and then bounced to a new file before being 'topped and tailed', then assembled as a playlist in Roxio's Jam for burning the final master CD. I habitually use Bias Peak for the final trimming of tracks, and as it gives the files a new Peak icon, it provides an easy visual indication of which tracks are finished. Jam includes the means to turn levels up or down from within the playlist so that fine level adjustments can be made between tracks. On this project, the main challenge was getting a nice balance between the harpsichord and piano tracks, as the strident tone of the harpsichord makes it seem relatively louder. The track gap time can also be fine-tuned by ear within Jam, as the best value subjectively depends on how long the decay of the previous track ending is and also on the pacing of the material. This doesn't compromise the resolution of the audio, as the final dithering from 24 bits to 16 bits is the last thing Jam applies before burning the disc.

I was prepared to return to this project after Gordon had taken the original mixes home to listen to, but a few days later he said it was fine exactly as it was, so our first test CD burn ended up also being our final master.

The finished CD, Gordon Giltrap's Another Time, Another Place, is to be released on Voiceprint records.