We've discussed how to record grand pianos in some depth in past issues, but miking an upright piano can present a very different challenge...

A range of different approaches to miking a grand piano was covered in my SOS January 2008 article (/sos/jan08/articles/pianorecording_0108.htm), but in practice many home recordists, whether by preference or out of necessity, find themselves faced with the task of recording an upright piano instead. Both types of piano share some characteristics, which means that many of the principles from the earlier article still hold true — so rather than reiterating all that information here, I'll work on the assumption that you've already absorbed that material (if not, I'd recommend you look it up) and concentrate on those differences between the instruments that warrant some extra attention. 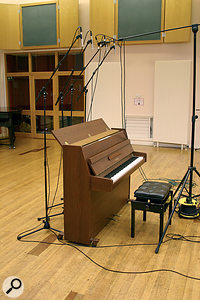 There's little call for recording upright pianos in a classical context, simply because uprights were designed for domestic use — not for projecting sound into a concert hall. As a result, most of the time you'll want to close‑mike uprights, rather than trying ambient techniques.

Having said that, the room in which the piano sits will obviously still have an impact on the recording — so you should try, at the very least, not to record in the tiny little practice cupboards within which upright pianos often lurk. Such rooms may work for practice, but they usually sound dreadful, and turn the already uphill battle of getting a good upright piano sound into an impossible task. Another tip is that boundary‑effect bass boost, while not giving the most natural sound for classical recordings, can bail you out if the low end of the piano in question is lacking weight.

Unless you can take some of the panels off the instrument (of which more later), the only way to gain access to the strings is to open the lid at the top and mic the piano from above. The low strings are on the player's left and the high strings on the right, and you can use much the same kinds of mic techniques you'd use over the hammers of a grand to capture them.

That said, the height at which you place your mics has an influence on how you set up for stereo capture. If you choose a very close placement (perhaps even slightly inside the case itself) the mics will tend to emphasise the registers they're closest to (as well as the mechanical-action noises of the piano). So if you're working with a piano part of limited register, it's worth zeroing in with your stereo rig on this region of the strings to help keep the sound even in your recording. This applies to very close placements in a grand piano as well, of course — but you rarely need to get that close with a grand unless you've got the lid down.

If you're using a spaced stereo technique, then extremely close miking is likely to risk creating a 'hole' in the middle of the stereo image, even if you're using good omni mics, so it would also make sense not to space the mics as far apart as you might when close‑miking a grand. One other thing to bear in mind is that, while spaced stereo techniques can help blend the sound of a grand in a subjectively pleasant way, I find that the phase‑cancellations between the mics bring out the 'pub piano' element of many uprights, which isn't often the kind of sound you're looking for. 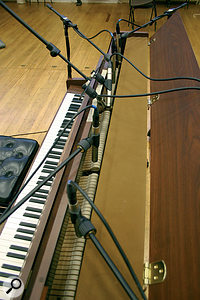 A range of close-mic positions used for some of the on-line audio examples that accompany this article.To demonstrate some of these issues, I've created some audio examples, which you can download from the SOS web site at /sos/apr09/articles/uprightpianosaudio.htm. The first set of examples are of an upright piano using three different stereo pairs of Rode NT55s, all poking a little way down into the casing of the piano (as you can see in the photo). The recordings are of: a spaced pair of omnis 50 cm apart ('UprightPanelsOnInsidePair1'); a spaced pair of omnis one metre apart ('UprightPanelsOnInsidePair2'); and a coincident crossed pair of cardioids in the centre of the instrument ('UprightPanelsOnInsidePair3'). The height of the mics above the open lid of the upright obviously affects the overall sonics, as well as the amount of room ambience, so I've also recorded exactly the same set of mics at heights of 20cm and 1m, to give an idea of the range of sounds on offer, and the results can be heard in the 'UprightPanelsOn20cm' and 'UprightPanelsOn1m' sets of files.

Taking The Panels Off

Most upright pianos can have most of their external body panels temporarily removed without the aid of wrecking gear, and this can help you get a clearer and more balanced sound from the strings. Coincident stereo miking techniques are pretty rare in this application, because you would usually want to put the mics roughly on the central line of the instrument for such methods, and that's exactly where the player sits. Customising the player with a chainsaw is not a practical solution, unless you're on a Slipknot session, so spaced mic arrays are usually chosen instead.

One option with a spaced pair is to put the mics either side of the player's head, so that the mics 'see' the tops of the strings emerging above the hammer mechanism, a technique The Feeling described using when I interviewed them in SOS March 2008. This gives a bright sound, rich in harmonics and with a lot of hammer attack, excellent for rhythmic parts that need to cut through a busy arrangement. 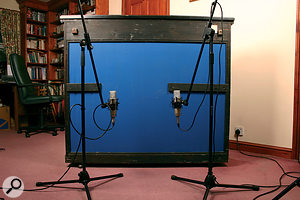 If you're unable to remove the top or front panels, recording from the rear of the piano with a stereo pair can give a surprisingly well‑balanced sound.An alternative to this placement is to put the mics either side of the piano stool, peering at the lower halves of the strings below the keyboard. This gives quite a different, and more mellow, sound for a number of reasons. Firstly, the high‑register strings simply don't extend past the keyboard assembly, so can't be 'seen' directly by the mics. Secondly, the soundboard contributes much more to the timbre underneath the keyboard because it is less obscured by the piano's framework and hammer mechanism. Thirdly, mics under the keyboard can catch each low‑ and mid‑register string at a point closer to its centre, which emphasises the fundamentals of these notes; above the keyboard it's typically only the ends of the strings that clear the hammer mechanism. The down side of this approach is that you can get quite a lot of mechanical noise from the pedal action down there, as well as any shuffling of feet and squeaking of the piano stool.

There's another strategy for upright pianos, though, which a lot of musicians don't consider, and that is miking the soundboard from behind the piano — something that was done, for example, on a bunch of Jerry Lee Lewis records. This can produce a surprisingly balanced sound, it doesn't rely on you being able to remove the front panels of the instrument, and the soundboard can be miked in stereo using whatever technique you like. While recording the other two techniques, I also set up another spaced omni pair behind the piano to capture the soundboard, and you can see how this sounds by checking out 'UprightPanelsOff20cmPair3' — again, the mics were 20cm from the soundboard and 80cm apart. As a final set of tests, I re‑recorded all three of the 'UprightPanelsOff' mic pairs at two other distances (50cm and 1m), to demonstrate the changing sound and ambience levels as the mics are moved further from the piano.