Release yourself from the computer keyboard with Logic Remote for iPad.

Logic Remote is Apple's all-purpose iPad app for controlling many of the primary functions in Logic Pro X. There's a whole new way of performing with Logic Remote's Touch Instruments, covered in the June 2014 Logic workshop (http://sosm.ag/jun14-logic), 'A Touch of Logic', but the practical benefits of driving Logic from Logic Remote rival the creative ones.

The Logic Remote app provides Logic's main transport controls and a straightforward mixer view handy for jumping into the vocal booth to record yourself. It's a no-brainer for singer-songwriters and instrumentalists recording in their own project studios. Even if you always sit near to your computer when piloting Logic, some of the other features are handy for keeping your Logic Pro screen in focus on your Mac, with the Logic Remote serving as a compact second monitor for targeted tasks. Logic Remote offers customisable Key Commands to operate and navigate Logic, and is topped off with a convenient view of Logic Pro Help for easy reference — perfect if in the heat of your production workflow you need to look something up and don't want to lose focus by masking your view of Logic. 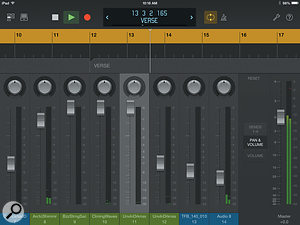 The Mixer view of Logic Remote.

Logic Remote will only work with your computer if it is, either, on the same Wi-Fi network, or connected to your iPad via Bluetooth. Of course, one of the Apple music apps — Logic, MainStage 3 or GarageBand — has to be up and running on your Mac since Logic Remote is a controller for these apps and can't be operated independently.

When you launch Logic Remote, you'll notice the Control bar along the top of the screen from which you can access whatever you want to get started, whether picking a sound to play from the Sound Library or getting set up to record. The Control Bar features, from left to right:

The View button gives you access to the View menu, which contains Touch Instruments, Chord Strips, the Mixer, Logic Remote Key Commands and Smart Help. Smart Help brings the Logic manual into view with an instant focus on the feature you're using, just like the Quick Help in Logic Pro X.

The Library button, directly to the right, reveals a full- or half-screen browser of your sound library from which you can select and play Touch Instruments on Logic Remote. In half-screen mode the Touch Instrument appears beneath the Library so you can audition sounds while browsing. Drag down on the bottom-centre of the Library for the full-screen view to see more choices.

By double-tapping the View button, you can quickly switch between current and previous views — very useful! 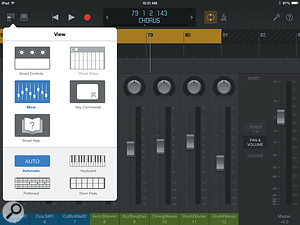 The View Menu reveals the Touch Instruments, Chord Strips, Mixer, Key Commands and Smart Help for Logic Pro X.When the project is playing, the 'Go To Beginning' button changes to a Stop button. Hit Stop and the button reverts to the 'Go To Beginning' button. In the LCD display, the upper line shows the playhead position in bars and beats. The lower line shows the selected track. The left/right arrows inside the LCD display scroll up and down the track list in Logic to select a different track.

Tap on the LCD to view the bar ruler where you can swipe to locate to different parts of the song. The Cycle area appears as a yellow strip on the top half of the bar ruler, toggled on and off with the Cycle button. Tap the Cycle area, then drag the handles on the edge to adjust length. Tap the LCD display again to hide the bar ruler. The Metronome is enabled with a tap, too.

There are two super helpful buttons at the right end of the Control bar. The one that looks like a wrench is the Settings button for accessing a versatile menu to undo or redo edits, create or duplicate a track, or open Logic Remote Help. The Info button, with the question mark icon, displays coaching tips for whatever is in view. You can practically learn your way around Logic Remote entirely from these coaching tips. You can also tap on certain coaching tips to open them in the Logic Remote Help.

While we're getting to grips with navigation, it's worth mentioning that, once you've selected Touch Instruments from the View menu, you can quickly switch to a different style of Touch Instrument by tapping Smart Controls & Keyboards then selecting the keyboard, fretboard or drum pads at the bottom of the View menu. 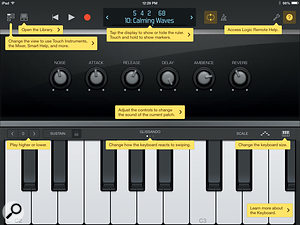 Tap on a yellow coaching tip to open Logic Remote Help on that topic.

With Logic Remote, you can easily explore whether touchscreen mixing is right for you. You can, for example, automate volume on strings and two drum tracks independently but at once with three fingers, which you may decide is pretty cool. You should find the layout straightforward and self-explanatory. The transport controls always remain in view at the top of the screen. Tap the LCD display to see the bar ruler like in Touch Instrument view. The Logic Remote Mixer offers these basic functions: