We look at how to get the most from Live’s Electric instrument.

With a little work under the lid of the classic Rhodes and Wurlitzer electric pianos you can create a highly customised sound. You can find many sampled versions of both models, but nothing beats physical modelling for creating your own electric piano sounds. For that, Live has you covered with Electric, included in Live Session and available as a €79$99 add-on to Live Standard. Electric was developed in partnership with Applied Acoustics Systems (www.applied-acoustics.com) and is derived from their electric piano plug-in, Lounge Lizard EP4 ($199). Aside from graphics, the primary difference between Electric and Lounge Lizard is that Lounge Lizard includes a larger bank of presets and an effects section well suited to electric pianos (tremolo, EQ, compression, amp and cabinet, reverb and a slew of time-based special effects). The extra convenience is well worth considering, especially if you’re a keyboard player. I’ll start with a look at Electric’s controls in the context of classic electric pianos and then move on to some sound-design possibilities. 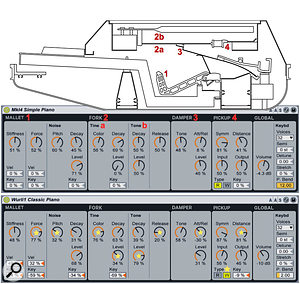 1: The numbered elements of the electric-piano action at the top are emulated in Electric. The controls most responsible for the different sound of the Rhodes and Wurly presets below are marked by stars in the Wurly panel.

When an electric piano’s key is pressed, a hammer (called Mallet in Electric and labelled #1 in screen 1) hits a metal rod called a tine (2a). The tine’s vibration starts the tone bar (2b) vibrating and the two reinforce each other. The vibrations are converted to an electrical signal by the pickup (4). When the key is released a damper (3) presses against the tine and stops the vibration. Electric’s controls vary the modelling of the characteristics of each of these components to produce a wide variety of tones.

If you’re not that familiar with electric pianos, a good way to get a sense of the sounds that are possible with a Rhodes or Wurly is to audition the Electric factory presets that emulate them. These are found in the Piano & Keys section of Electric presets and their names start with ‘MkI,’ ‘MkII’ and ‘Wurli.’ The many other Electric presets in that folder are also worth a listen. The Rack presets (those with a vertical bar through their icon) add various effects, which while interesting, can obscure the role of Electric.

Here are a few tips for setting the controls in each section:

The first thing to consider when adding audio effects after Electric is that Electric is a mono instrument — the same audio signal appears in the right and left channels. Many effects process the channels differently in order to create a stereo output, but tremolo is by far the most common one for electric piano. Live’s Auto Pan makes short work of that: insert it after Electric and load its Tremolo preset. For performance you might map the MIDI Mod Wheel to Auto Pan’s Amount knob and map any convenient MIDI CC to its Rate knob. Another quick way to separate the right and left channels is to insert an EQ Eight after Electric and use its L/R mode to EQ the channels differently. For example, you might cut the high end for the left channel and the low end for the right channel, thereby emulating an acoustic piano’s stereo image from the player’s perspective — low notes tilted left and high notes tilted right. More shapely EQ curves provide more interesting results. 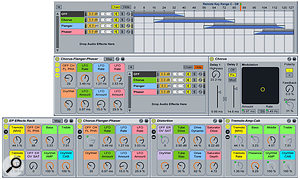 2: An Audio Effects Rack is used to layer Live’s Chorus, Flanger and Phaser effects as well as a chain for the dry input. Notice that the overlapping of the layers still allows for each chain to be heard alone, which is more typical. At the bottom the three effects Racks described in the text are combined into a single Audio Effects Rack.The next most common effects to apply to Electric are Amp and Cabinet. Both offer Mono and Dual modes. Dual mode processes the right and left channels separately, which places more of a load on your CPU but is necessary to preserve the stereo image. You can leave Amp and Cabinet in Mono mode as long as you place all stereo effects after them, although that will often sound a bit unrealistic. Whenever possible, place Amp and Cabinet in Dual mode at the end of the effects chain.

Live’s Phaser, Flanger and Chorus audio effects are also commonly applied on electric pianos. Screen 2 shows one way of arranging them in separate chains of an Audio Effects Rack with an additional chain for the dry electric piano. You can build a similar Rack with Live’s distortion effects Tube, Overdrive and Saturator. You can then use each Rack’s Chain Selector to crossfade between the effects as shown in screen 3. Here the chains are distributed so that assigning a four-key range such as C to D# to remote control the chain selector will select the solo region within each chain. For performance you might want to incorporate all three Racks in a single Audio Effects Rack, as shown at the bottom of screen 2, and then map the essential controls to the eight Macro knobs of the master Rack. 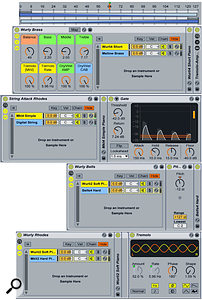 3: Four Instrument Racks illustrate layering electric piano presets with other sounds. In all cases, the Rack’s Chain Selector shown at the top is used to crossfade between the layers. Notice that only one layer is active at each end of the Chain Selector.

Electric piano patches with and without add-on effects are good candidates for layering with other instruments. Screen 3 shows four examples: a Wurly layered with a sustained brass sound (Analog:Mellow Brass), percussive strings (Collision:Digital String) layered with a Rhodes, a Wurly (Electric:Wurli4 Short) layered with a bell-like sound (Electric:Bells4 Hard) and a Rhodes (Electric:MkII2 Hard Piano) layered with a Wurly (Electric:Wurli2 Soft Piano). In all cases, balancing between the two layers is effected with the Instrument Rack’s Chain Selector, which provides the smoothest transition as well as leaving the chain volume controls free for managing levels.

In the top example, the Wurly is processed with the Tremolo-Amp-Cabinet effect described in the previous section. This provides a nice complement to the sustained tail of the brass sound. Notice that the Tremolo-Amp-Cabinet controls are brought out to the master Instrument Rack. Collision’s Digital String preset has a sharp attack, and Live’s Gate audio effect uses its maximum Attack to soften the Rhodes’ attack and keeps it out of the way. In the third example, Live’s Pitch MIDI Effect is used to lower the bell-like sound by an octave to make it fit better with the Wurly layer. In the last example, tremolo has been placed after the Instrument Rack so that it affects both the Rhodes and Wurly.

In my choice of effects and layers I’ve stayed close to an electric-piano-like sound, but you can take Rhodes less travelled with some of Live’s more extreme effects such as Grain Delay, Auto Filter, Beat Repeat, Frequency Shifter or Vocoder. For example, insert Vocoder on a track playing a drum loop and choose your Electric track as Vocoder’s Carrier input. Use Vocoder’s Dry/Wet knob to balance the drum loop with the vocoded electric piano, and make sure Vocoder’s Audio From is not set to Post Mixer so that you can change the Electric track’s volume without affecting the vocoded result. Use Vocoder’s L/R mode and tweak its Bands, Depth, Formant and Release settings for the best results.