Checking real-world latency just got easier, with a new tool from DAW Bench...

I first started measuring the 'real-world' latency of audio interfaces way back in 2002, and have documented various findings along the way, including the extras associated with A-D and D-A converters, onboard DSP buffers and sample-rate conversion, among others. More recently, in PC Notes August 2011, I discussed the rather newer concept of 'hidden buffers' employed by some audio interfaces to ensure smooth playback delivery, but sometimes not declared to the sequencer software, so that you end up thinking you're running at a lower latency performance than you actually are.

Measuring real-world latency is normally done by sending a test signal to an output of the device under test, passing this signal back to one of its inputs using a short 'loopback' cable, and then measuring the resulting round-trip delay. At first, I did this by hand, creating my own test pulses and using an audio editor to work out the delay, but CEntrance made things easier in 2006 when they released their freeware LTU (Latency Test Utility, downloadable from http://centrance.com/downloads/ltu and accurate to 0.5ms), although it did prove a little fiddly to get reliable results. 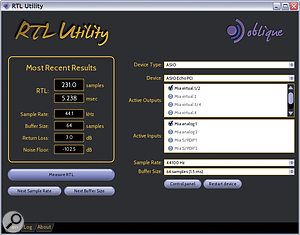 If you want to find the real-world latency of your audio interface, try the RTL utility — the results may not be what you expect! Here's the respectable 64-sample result for my ageing Echo Mia soundcard.

Now our old friend Vin Curigliano of DAW Bench fame has collaborated with Andrew Jerrim to produce the standalone RTL (Round Trip Latency utility, downloadable for PC use from www.oblique-audio.com). I found RTL simplicity itself to use, and it provided results that were repeatable within a sample or two at most, thus ensuring latency measurements accurate to a small fraction of a millisecond. Moreover, whereas results measured using a sequencer are at possible risk of being skewed by internal 'priority' settings, RTL measures just the interface and its ASIO or DirectSound drivers.

This tool has finally enabled the latency of many PC audio interfaces to be directly and accurately compared, so if, like drummers and many guitarists, this aspect of performance is important to you, point your browser at www.dawbench.com/images/dawbench-llp-01-12-1.jpg to see all the latest results. The 'extras' may surprise you; the variation in round-trip latency with '64-sample' buffers (whose input and output latency measures 1.5ms each at 44.1kHz) currently varies between 3.582ms and 12.177ms for different interfaces. If you use RTL to measure your own interface, please add the results to the already lengthy SOS forum thread at /forum/showflat.php?Cat=&Number=918351.

Continuing with this month's theme of useful test software for the PC musician, anyone who wants to learn more about synthesis is likely to be interested in the shape of the waveforms they are listening to. Most audio editors now include some sort of 'Oscilloscope' display option for this purpose, but anyone who has used a real hardware oscilloscope will already know that the software versions are invariably very limited. In particular, they rarely offer any sort of timebase functions so you can zoom in to the waveform to study individual cycles more closely, or zoom out so that an ADSR envelope can be seen in its entirety. 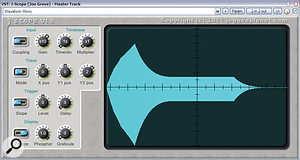 J-Scope is the best oscilloscope plug-in I've ever used for examining synth waveforms or envelope shapes in a stable and repeatable manner. Here it is displaying an ADSR envelope lasting almost 20 seconds.

Enter Jon Grove's donationware J-Scope (www.jaggedplanet.com/VST/jscope.html), a tiny 420KB PC-only file. Apart from its timebase functions, it also offers variable trigger level, so you can lock onto a particular part of a continuous repetitive waveform to get the display stationary for close observation, and you can also turn up its 'phosphor' persistence to use it like a storage scope whose trace remains on screen for some seconds, or even permanently, until you decide to release it. This is the perfect way to capture envelope shapes that happen over many seconds.

Once I'd dropped this DLL file into my VST plug-ins folder, I ended up deleting the other scope plug-ins in my collection because this does so much more, and with so much precision. It's the closest experience I've had to a hardware oscilloscope!

Intel's Sandy Bridge Core i7 2600K and its new replacement, the Ivy Bridge Core i7, both run at a nominal 3.4GHz and have four cores and eight threads. However, benchmark tests already show the Ivy Bridge model running up to 16 percent faster, partly due to a slightly faster top Turbo clock speed, and also to improvements and lower power consumption of the newer 22nm architecture compared with the older 32nm version.

We will have to wait and see how this translates to increased audio performance but, given that the 3770K should have an identical price to the 2600K when it starts shipping in April 2012, it looks likely to become the new favourite for the musician.

Sadly, as always, Intel will be releasing new chip sets to partner them, so you can't just plug a 3770 into an existing motherboard. Instead, Intel will simultaneously release their Z77, H77, Z75 and B75 chip sets for desktop PCs, hopefully along with various third-party motherboard releases that feature them. Overclocking also seems to finally be accepted as mainstream, with Intel now offering 'Tuning Protection Plan' insurance in case you fry your overclocked processor.