Get your audio applications talking to each other with Reaper's ReaRoute.

Gather your pieces of analogue effects gear together and put them in a pile. Now take any two of those pieces and try to connect them. Chances are they'll both share a common, standard connector that lets you send audio from one unit to another and back again, with the minimum of fuss.

Now gather your DAW programs together in a virtual pile. Take any two of those DAWs and try to connect them without routing audio outside your computer. Chances are you won't find an easy way to route audio to and from both applications. Most of them will support the ReWire protocol, which lets you send audio from one host to another, but only in one direction. While there are workarounds for bi‑directional audio that involve third‑party patching programs, getting audio to and from two DAWs on the same computer has always been a complicated process — unless you use ReaRoute.

In this article, we'll show you how to do just that, as well as how to dub between programs, and demonstrate a way to gain access to effects processors in other applications, to add something extra to your audio tracks.

ReaRoute provides 16 audio inputs and outputs via a custom ASIO driver. The connections can be used as 16 mono ins/outs, as eight stereo pairs, or as any combination of the two, and provide real‑time, bi-directional audio streams between any applications that are capable of using an ASIO driver. ReaRoute is not a replacement for ReWire, however. Unlike ReWire, it doesn't support MIDI. 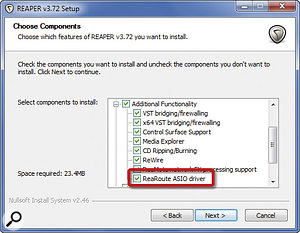 ReaRoute may not have been installed as part of the initial Reaper installation, so re‑run the installer and select 'ReaRoute ASIO driver' in the Additional Functionality section to acquire it.

If you've already installed Reaper but not ReaRoute, you can run the installer again to acquire the driver. You don't have to uninstall Reaper first to gain access to ReaRoute.

Reaper must be running, and must be the master application at all times when using ReaRoute. By default, however, Reaper releases the audio driver whenever it is not the focused application. To make sure this doesn't happen when you're using ReaRoute, clear the check-box for the 'Close audio device when stopped and application is inactive' option in the Audio Preferences. This ensures that Reaper maintains control of the audio driver at all times. If you don't clear that option, the driver stops working when you try to select ReaRoute in other applications.

ReaRoute is great for real‑time dubbing between applications. Got an eight‑track bed in another host that you'd like to transfer to Reaper, but don't have the time to mess around doing renders? Just ReaRoute the application to Reaper and you can transfer the tracks in the amount of time it takes to play through the project once. The following example demonstrates how to quickly transfer eight stereo tracks from the host FL Studio to Reaper:

When you've finished the audio transfer, save the Reaper project and change the audio device in FL Studio back to the standard ASIO driver, before closing FL Studio.

One of my favourite effects processors is the Scream 4 Sound Destruction Unit in Reason. For years, I'd wanted to use it as an effects processor in my Reaper tracks but, even with the creation of ReaRoute, I was never able to pass audio into Reason.

With the release of Record, this wish finally became a reality. Using the Record/Reason combo provides a method of getting audio into Reason, and therefore opens up Reason to ReaRoute. In the following example, we'll use ReaRoute to put some 'Scream' into our Reaper tracks.

To get audio back to Reaper, we now need to route the output of the audio track to ReaRoute.

The same process can be used to access any of the effects processors in Record/Reason, including the Master Bus Compressor.

ReaRoute works with any ASIO‑compatible programs, not just DAWs. However, while it's technically possible to use ReaRoute to route audio to and from more than two applications at a time, the driver drops out on my machine when I route audio to and from FL Studio and Record/Reason at the same time. Your mileage may vary, depending on the capabilities of your system, but it's worth remembering that ReaRoute works best when you limit it to two applications.

When you've finished using ReaRoute, it's a good idea to set the audio device in your non‑Reaper applications back to their default settings, as you may experience some unexpected behaviour if you open a ReaRouted program without opening Reaper. ReaRoute is not meant as a replacement for your normal ASIO driver, but works perfectly as a virtual patchbay for real‑time audio streaming, so you can quickly get audio where you need it to go.