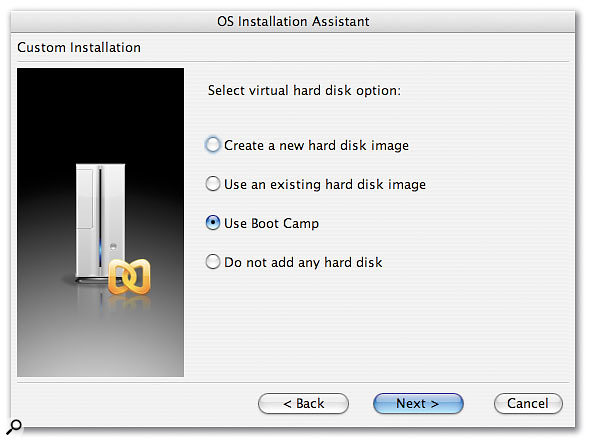 A new beta of Parallels Workstation enables you to run your existing Boot Camp partition as a virtual machine, saving you from needing to have two copies of Windows installed on your Mac, and hopefully a few reboots.

We take another look at running Windows on Intel Macs and consider how Apple's latest acquisition will affect their professional video and audio software.

During the last month I spent nearly three weeks in Europe (I normally live and work in the USA), which meant relying on my Macbook Pro to be my main machine and cater for all my computing needs. On such trips in the past I've always ended up taking two laptops with me: a Powerbook and an IBM Thinkpad — one for Mac OS, one for Windows. But this time I figured that now the Macbook Pro is perfectly capable of running Windows (in theory, as well as any Windows-only portable), taking one laptop would be much more convenient for travel. So this month I wanted to share some thoughts about the computing equivalent of being 'an Englishman in New York'.

Installing Apple's own Boot Camp software and getting Windows to run is pretty straightforward, although it's worth remembering that Apple still classify this as a beta, so it may not be perfect (the final version should ship with the next major version of Mac OS X, in 2007). Boot Camp can be downloaded from www.apple.com/bootcamp and installing it is a simple matter of following a few steps in the Assistant and setting whether you want to install Windows on a dedicated drive or a partition. If you choose a partition (as I did, so as to keep everything inside my laptop), you can set how much to leave for your Mac files and how much to use for Windows. My MacBook Pro has a 100GB internal drive, so I dedicated 20GB to Windows.

Another choice here is what filing system to use for your Windows partition. Almost everyone in the Windows world uses NTFS over the older FAT32 system; however, while Mac OS X can read NTFS volumes, it can't write to them, whereas it can both read and write to FAT32 volumes. I opted for NTFS, since I assumed I'd need to read from the Windows partition more than I'd need to write to it when running OS X.

In Windows, of course, you can't read or write to a Mac volume without additional software, the most popular being Mediafour's Macdrive (www.macdrive.com), which costs just $49.95. Earlier versions of Macdrive didn't support the OS X Boot Camp partition, but the latest version will.

Once the Boot Camp Assistant completes its work, you'll be prompted to insert a Windows XP Home or Professional CD, and then your Mac will reboot and begin the Windows installation. One bizarre footnote here: even though I've successfully installed Boot Camp many times on other Macs (iMacs, Mac Pros, and so on), on this occasion the Windows XP installer was repeatedly unable to read files from the Windows CD. I tried many different Windows CDs (thinking that the CDs might be scratched or dirty), but still no joy. In the end I discovered that the problem was occurring because my Macbook Pro was perched on a surface so that the optical drive was hanging out into space (which I wouldn't recommend!), so the disc wasn't being read correctly. When I put the laptop back onto a firm surface, everything was fine.

Once Windows is installed, you have to install Apple's suite of drivers from a CD that was created by the Boot Camp Assistant. While this allows almost all of your Mac's hardware features to function in Windows, such as the eject key on the keyboard, it definitely isn't as functional as the software typically supplied by other laptop manufacturers, such as Lenovo or Sony. For example, with Boot Camp you're left to use the default power management functions in Windows, which, for laptop users, means you generally will enjoy less battery life, as there's no way to access the advanced power-management features of the Core or Core 2 processor. On the plus side, though, Apple do provide a System Tray utility for adjusting the brightness of the display, which helps with battery life, since you can't adjust brightness (or volume, or anything, for that matter) from the usual keyboard controls. Fortunately, there's a neat donationware program, that more experienced Windows users might be familiar with, called Speedswitch XP (www.diefer.de/speedswitchxp) that allows much finer control of your processor power-management features, yielding much more respectable battery times.

For the most part, running Windows XP Pro on my Macbook was just like having a dedicated Windows portable with me. The only real annoyance was that I really didn't like the way the built-in trackpad handled in Windows, so for long sessions I just plugged in my Mighty Mouse. Everything else just worked, and audio software such as Cubase and Live ran perfectly with my RME Fireface 400 interface. 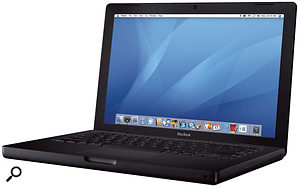 All Macbooks, including the coveted black model, now feature Intel's new Core 2 Duo processors for the same cost as their predecessorsShortly after finishing last month's Apple Notes, which discussed the revamped Macbook Pro models using Intel's new Core 2 Duo processor, Apple introduced updated Macbook models featuring the same processor. As you may know, the Core 2 is a significant upgrade because it's based on the same design as the latest Xeon processor used in the Mac Pro, meaning that it's a 64-bit processor and offers improved execution of SSE instructions (used by programmers to optimise DSP algorithms) and better cacheing. Since the original Macbook had only been introduced less than six months before, it's both surprising and great news for consumers that Apple are offering Intel's latest technology in this model so quickly.

The Macbook line-up remains the same as before, with the same clock speeds in the Core 2 processors as in the previous generation. The 1.83GHz white Macbook is still available for £749, while the 2GHz white Macbook still costs £879 but now includes an 80GB hard drive, 1GB RAM and a six­speed Superdrive. The top-of-the-line black Macbook also keeps its £999 price tag, but now includes a 120GB hard drive, 1GB RAM and a six-speed Superdrive.

The Macbook was already a tempting proposition for musicians on a budget (see December 2006's Apple Notes for details of performance tests with Logic Pro 7) and Apple claim that the new models are around 25 percent faster than their predecessors. While there's still an issue in terms of how the Macbook's use of integrated graphics hardware will affect performance in the future, for now it's a perfect entry-level machine for musicians who need portability.

While Boot Camp is a great way to run Windows on your Mac, there are times when it can be frustrating to reboot your computer into a different operating system — Wherry's law dictates that for a given task to be performed, you will always find yourself booted into the wrong operating system. Or is that just Murphy's Law once again? However, Boot Camp isn't the only way to run Windows on the Mac. Back in June 2006's Apple Notes we discussed Parallels Workstation (www.parallels.com), which allows you to boot Windows quite literally in a window while you're still running Mac OS X. 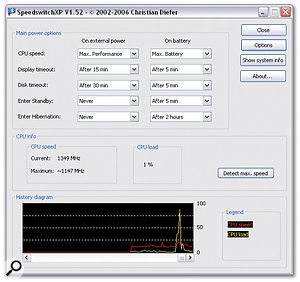 Speedswitch XP is a useful utility that enables you to take full control of the advanced power-management features of your Macbook or Macbook Pro when running Boot Camp.Parallels Workstation makes use of a technology known as virtualisation, where your computer's hardware is virtualised in order to support the execution of so-called virtual machines. All of the processors featured in any Intel Mac offer hardware support for virtualisation. The up-side of virtualisation is that you can run many operating systems simultaneously, each in their own virtual machine; the down-side is that the performance of these virtual machines is not quite the same as running the operating system natively and hardware support can often be limited. This latter point can be a big problem for audio software where you need to access external audio hardware for low latency.

So for most musicians a hybrid use of Boot Camp and Parallels would seem ideal. Run Boot Camp when you need dedicated performance for audio applications and use Parallels for less intensive tasks, such as performing an export or a quick edit in Wavelab, for example. However, with the current version of Parallels it's not possible to use the Boot Camp partition as a Parallels virtual machine, meaning that you need to have two separate Windows installs on your Mac: one dedicated drive or partition for Boot Camp and another virtual machine disk image for Parallels. The good news, though, is that although the current release version won't run your Boot Camp Windows install, a newly released beta version will. Finally, one Windows install to rule them all!

Apple acquiring a company to bolster its professional software line is nothing new: almost all of Apple's professional software products have come either entirely or in part from acquisitions. Apple have plenty of products for creating or storing (in the case of Xserve RAID and Xsan) digital content, whether audio or video, but there has been a gap in terms of content or asset management: how do you actually keep track of all your video and audio files?

To solve this problem, Apple recently acquired Proximity (www.proximitygroup.com), which develops a media-asset management system that, according to the company's web site, allows you to "catalogue all your content", "search, find, browse your media", "create rough cuts from anywhere" and "integrates with your editing tools, like Apple Final Cut Pro." Avid acquired Alienbrain (www.alienbrain.com) to fill a similar gap in the company's offerings back in January 2004, so Apple's acquisition makes a good deal of sense in terms of being competitive and providing a complete 'solution' in this area.

While asset management, and Proximity's products in general, currently cater for video production, under Apple's ownership the technology could hopefully be used to create a broader system for those working with video and audio. Asset management is becoming more important for musicians and audio engineers, especially when you consider all the media we now have to manage: project files, samples, audio files, loops and so on. It will be exciting to see how Apple incorporate this technology into new products over the next year.

Those who have a Mac featuring an infra-red port for use with Apple's Remote and Front Row media software might like to know that it's possible to make use of Front Row even if you don't have the Apple Remote handy. As I found out this month (by accident, I should add!), you can activate Front Row by simply pressing Apple + Escape. The cursor keys work as navigation buttons, Return becomes the Select button and Escape is the Menu button.