The Sandy saga has been taking up column space for several months now — so how long should you wait before crossing that bridge? 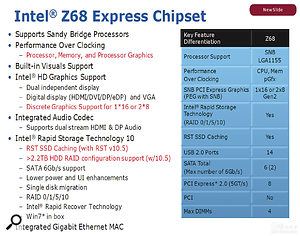 Intel's new Z68 Sandy Bridge chip set is more overclockable than the H67, and more versatile than the P67. Could it become the new favourite for musicians?

Intel's P67 and H67 Express Sandy Bridge chip sets have generated many column inches in computer circles (not least because of their recent recall), but only the P67 version seems to have set much of the audio world on fire. It's not hard to see why. Both support the overclocking of RAM, but while the H67 features integrated Intel HD Graphics components that can be overclocked with Turbo Boost, plus dedicated QuickSync acceleration for decoding and encoding HD videos, only the P67 allows overclocking of the CPU for significantly enhanced audio performance. It does need partnering with an external graphics card, however.

Now that the dust has settled, more and more people are wondering why Intel made these arbitrary decisions, and whether it's worth waiting a little longer for motherboards featuring the high‑end Z68 Express chip set, which provides both integrated graphics and CPU‑based overclocking, and is slated for release about the time you read this, in mid‑May. The Z68 also supports solid‑state drive caching to boost the performance of systems that already have mechanical hard drives, which is arguably a better approach than fitting an SSD boot drive, since it speeds up access to any data that you access frequently.

With integrated graphics that ought to be more than sufficient for many audio applications (as well as being versatile enough to support video streaming duties, where required), plus the more flexible overclocking options, I suspect that the Z68 chip set could quickly become the new favourite for the musician. Promised pricing is close to that of the P67, and there's the comfort of knowing that the second release in a new chip set line is likely to have fewer teething troubles, so these are interesting times for anyone planning a PC upgrade.

Ever got an obscure error message like this when attempting to install some new software? It might be your virus‑checking software being a little too enthusiastic.

Recently, I experienced some very frustrating installation problems. These had different symptoms, but eventually turned out to have the same fairly simple solution, so here are the details, to let you sidestep such issues if you run into them in the future. First, each time I received an update for Little Endian's SpectrumWorx 2 it installed perfectly, but as soon as the update had finished, my entire PC locked up, requiring a reboot, after which the updated plug‑in carried on working perfectly. The second was after attempting to update my iLok drivers, which, once again, worked fine, except that once the install had almost finished I got an error message to the effect that an associated service had failed to start, after which it abandoned the driver update.

The culprit in both cases turned out to be an over‑enthusiastic virus checker. We all need decent protection when connected to the Internet, but sometimes this can prevent legitimate processes being run when they are deemed suspicious. Most virus checkers should pop up a warning to this effect when blocking something, but it seems this doesn't always happen.

After temporarily locking my Internet Firewall, I found that disabling my background virus-checker utility before running the SpectrumWorx installer resolved its crash endings. However, the iLok driver installer required a complete shutdown of my entire virus checker before it would finally finish and let me continue to use all my iLok‑protected plug‑ins. So if you ever experience the tell‑tale symptoms of a software install failing right at the end, try temporarily disabling your virus checker and trying again. Just don't forget to re‑enable your virus checker immediately afterwards!

Windows 8 News: The biggest news about Microsoft's forthcoming operating system is that it will also run on the 'pointy finger' interfaces offered with ARM (Advanced RISC Machine) processor products such as iPad tablets and Microsoft's own Lap PC. This time around, Microsoft are also promising 'Instant On', 'Fast Shutdown', 'good battery life', and a built‑in PDF reader (at last!). It's also rumoured that it will include webcam face recognition for log‑ins. Windows 8 is currently expected some time in 2012.

Commodore 64 PC: In a somewhat bizarre move, Commodore are about to release a Windows PC housed in the casing of the original Commodore 64 home computer casing, but this time containing a 1.8GHz Intel Atom D525 processor, Nvidia graphics chip, up to 1TB hard drive, 2GB or 4GB of RAM and an optional Blu‑ray player. The integrated C64 emulator also lets you play 8‑bit music and games. The vintage brown box of the C64X PC should have started shipping by the time you read this, with prices starting at £364$595. Have Commodore overestimated the strength of the nostalgia market?