The Practical Craft Of Recording
By Neil Rogers 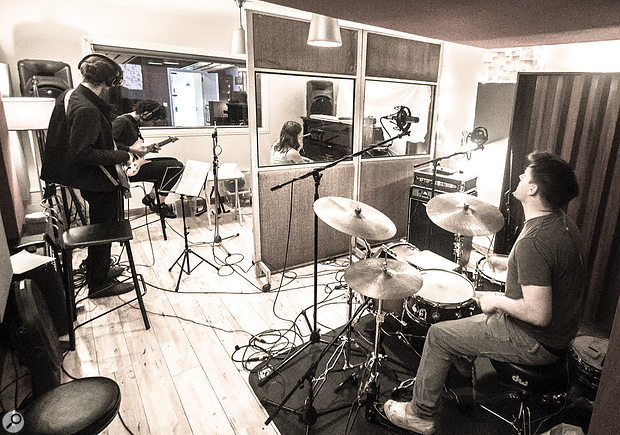 How do you record a piano and drum kit in a modest live room, at the same time? Our engineer explains his approach...

One thing you'll often hear engineers discuss when they're dispensing tips on mixing is the importance of context — how a particular source sounds in relation to whatever is going on alongside it, rather than what it sounds like in isolation, when soloed. But context is just as crucial a consideration when it comes to the recording stage. When recording an instrument, for example, knowing the context in which it will be heard in the final production can influence your choice of mic and mic technique, of the acoustic space you'll record in, the instrument itself, and perhaps even who will play it.

Recently, I completed the production of an album for the artist Kate Lucid that demonstrates this point very well. It featured her excellent piano playing, along with an assortment of parts by other musicians on different tracks. Much of the piano for the album was played on a top-range Steinway D piano and recorded on location using DPA 4006 omnidirectional microphones. And, unsurprisingly, that combination of great musician, great instrument and great mics combined to deliver a rich, detailed sound, with everything you'd hope for from a full-range piano recording.

That Steinway session, though, was for songs that mostly comprise only piano and vocals, with nothing else fighting for space. Yet, for two other album tracks the piano was only one element in an arrangement that also involved drums, bass and guitar. And for those particular tracks not only was it not so important to capture such a lush piano sound, but the context meant it was arguably not even desirable. So I opted for a very different approach, recording Kate playing the upright piano back at my own studio (where I have neither the space nor the resources to maintain a full-size Steinway grand!)

I've worked out a few different ways to record my studio's upright — indeed, regular readers may remember that I took the time last year to compare several different recording techniques with this piano (see SOS December 2019: https://sosm.ag/maintain-and-mic-an-upright-piano). So I have a number of options now that I know can meet the needs of different sessions. But what that article didn't explain is that I've also come up with some strategies for recording the piano when it's being played alongside other instruments.

For this session, the piano would need to share the recording space with a few instruments. Notably, a full drum kit would need to be played in fairly close proximity to the piano. In fact, when we initially planned the recording, we weren't entirely convinced that we'd be able to make the live recording work in this smaller live room — or whether this piano sound would stand up when heard alongside the other tracks on the album. Happily, it did, although, as you can probably imagine, the result was a complete contrast to the 'hi-fi' Steinway recordings.

The line-up consisted of upright piano, drums, bass guitar and electric guitar, with Kate also singing a guide vocal whilst playing the piano. We wanted to capture live recordings of the band, but with enough separation that we'd have some control in the mix. The guitars were quite straightforward; I have other rooms in my studio in which I can put amps and cabs to isolate them and run cables back to the live room. But obviously that wasn't an option for the piano and...