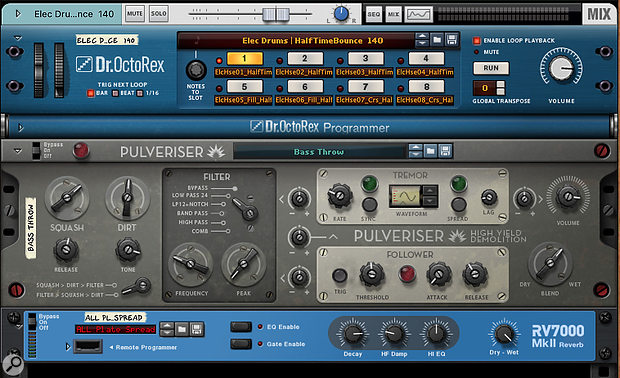 We take another look at Reason's endlessly useful Combinator.

Reason's Combinator has had more mentions in SOS's Reason workshops than any other Rack device. It's been in the spotlight again in recent months because it's useful for making portable patches, independent from Reason's own song files or DAW plug-in presets files. Combinators can wrap up individual sound patches, or whole chunks of your Rack, making them easy to move between projects, between instances of the Rack plug-in, or between the plug-in and stand-alone versions of Reason. So now seems like a good time to revisit the Combinator and look at some examples of the fun and useful stuff it can do.

The Combinator is essentially a sub-rack: a black box that contains any number of other devices patched together. The Combinator itself has master audio inputs and outputs that can be connected to what's inside. It also has MIDI and modulation connections that can be passed through to the enclosed devices. A programming panel gives you detailed control over how MIDI and mod sources are routed and filtered internally. Finally, the front panel of the Combinator has four knobs and four buttons that can be configured as macros to control parameters on the combined devices.

Let's start with something simple: a custom effects patch with two devices chained together. There are two different ways you can create a Combi patch. You can start with a blank, empty Combi and add devices into it, or you can select some existing devices in the rack and choose Edit > Combine. The latter option means you can decide to save a chunk of the Rack at any time without planning ahead. 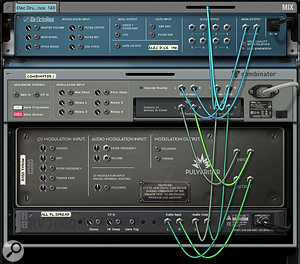 Screen 2. After combining, the effects group has a unified input and output on the Combinator rear panel.In Screen 1 (above) I've added a couple of effects after a Dr Rex loop player, creating a simple effect chain that goes through the Pulveriser distortion then the RV7000 reverb. I then selected the two effects and Combined them. Screen 2 shows the resulting auto-cabling. The routing between the effects is maintained, but they're now patched to the master input and output of the Combi device. The Loop player connects to the external input of the Combinator.

This Combinator can now be saved for later use. All the settings of the internal devices are saved at the same time. However, we can get fancy and add some macro controls so that the Combi becomes a unique custom effects device. This is done in the Programmer (as in Screen 3), which needs to be unfolded with the Show Programmer button. 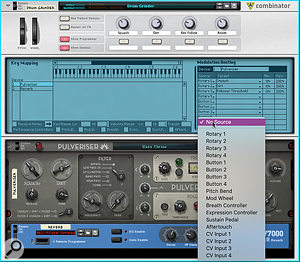 Screen 3. The mod matrix allows both incoming MIDI and the Combinator's own macro controls to be mapped to specific device parameters.We can ignore the MIDI mapping and filtering section for this patch, and concentrate on the Modulation Routing area to the right. To map a Combi control to a parameter, you first have to click the target device in the list to the left. The mod matrix has 10 slots, the first eight of which have their Source field pre-populated with the Combi front panel controls. You can change or add to these with any of the available mod sources shown in the pop-up list.

In this simple example I've mapped the first three rotary controls to the main distortion tone controls on Pulveriser. You can't see on the screenshot, but I've also mapped Rotary 4 to the Dry/Wet control of the reverb. For this control I've adjusted the minimum and maximum settings to customise the macro range as I don't want a fully wet signal. Lastly, I've added my own names to the Combi knobs on the panel.

Combis are also the key to stacking multiple instruments to make layered sounds, or to split sources onto different parts of the keyboard. Screen 4 shows a simple split patch. This has a Europa synth tied to an Arp Player for playing arpeggiated chords with the right hand. The left hand plays a bass drone with a Malstrom synth. 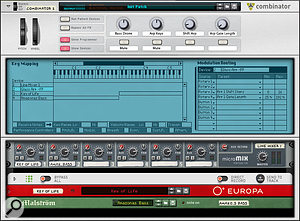 Screen 4. MIDI filtering and key mapping make the Combinator ideal for creating layered or split patches.This Combi project requires some manual cable patching. This time I started with an empty Combinator then added the Europa, which auto-cabled itself to the Combi device output. When I added the Malstrom, Reason left it uncabled as the Europa was already using the output. To resolve this, I added a 6:2 Line Mixer from Reason's utility devices. This device is a very common addition to Combinator patches, as it can submix sources to the Combi main output.

The MIDI split has been set up with the Key Mapping section of the Programmer. After selecting a device you can adjust its key range. I've also shifted the pitch ranges using the Transpose setting. To give the patch some performance macros, I mapped the first two controls to the internal Mixer channels, and used the other two to allow some live tweaking of the arpeggiator.

Many of Reason's factory sounds, and patches from third-party Refill packs use the Combinator as their default instrument shell. This enhances the scope for sound design beyond the basic instruments devices, bringing effects, Players and modulation sources into play. It's also lots of fun to add a sequencer to a Combi patch. 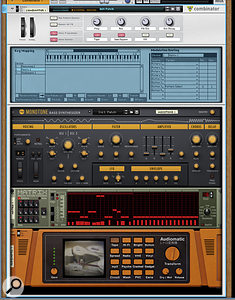 Screen 5. By adding sequencers to Combis you can create your own custom grooveboxes.In Screen 5 I've combined a Monotone Bass Synth with a Matrix sequencer and the Audiomatic sound shaper to make a simple little groovebox. Combis have a Run Pattern Devices button that let you trigger sequencers from the front panel. By now the basic routing of this patch should be straightforward. The more interesting feature is how the Macro controls are configured. The first three are simply mapped to parameters on the Monotone synth. The fourth knob controls both the Amp and Filter Envelope Decay parameters. To achieve this you need to choose the same source (Rotary 4 in this case) in two separate slots in the mod matrix.

I've also mapped some button controls in this Combi. Buttons can control any parameter, you just need to adjust the Min and Max setting for the desired results. The 'Tape' control switches the Audiomatic device in and out. It's a common Combi trick to map a button to a device's Enabled parameter. Make sure to set the Min to 'Bypass' and the Max to 'On'. Avoid the 'Off' setting which stops audio from passing through.

The Saw/Square button steps the Monotone's Oscillator Shape dial between two positions. Finally, the Fill button is mapped to the Matrix Sequencer's Pattern Select parameter, allowing you to toggle between two pattern variations. You can also map a Rotary to Pattern Select to reach any number of patterns from the Combi front panel, which is great for building more complex performance players and custom drum machines.