Recording an instrument for the first time in an unfamiliar room can be a rewarding experience — if you set about it in the right way!

After more than five years of working fairly exclusively in the controlled environment of Half-ton studio in Cambridge, recent projects have required me to venture a little further afield and do some of my tracking on location. To this end, I recently acquired a small portable recording setup which came in very handy on the session described in this article. 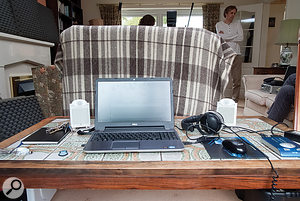 My improvised control area for the session, complete with borrowed home-cinema-style speakers and a back-breakingly low table!

I'm currently recording an album for James Varda, and for these sessions I've done much of the work in the artist's home, including a series of overdubs of acoustic guitar and accordion. One of the more unusual challenges I faced in these sessions was my first ever attempt at recording the harp, so I thought it might be useful to write about some of the issues the instrument presented, and how I tackled them.

The recording environment for the harp session was a fairly typical living room setup, with sofas, a thickish carpet and curtains, all of which lent the room quite a dry, controlled-sounding acoustic. Everything — both miking and monitoring — had to be done in the one room, so I set myself up on a coffee table, and aimed to put as much distance between my recording rig and the microphones as was possible. My setup for such sessions is pretty streamlined, consisting of a Windows laptop, an RME Babyface interface, a few pairs of headphones, and appropriate stands, leads and other such paraphernalia. Because the Babyface has only two dedicated microphone inputs, I'll tend to take just two or three good-quality mics along to a session. I could, of course, take along further preamps, but I prefer to embrace the limitation, as it forces me to commit to decisions on the spot. That way, I find it easy to keep the emphasis very much on the quality of the recording, rather than keeping options open with lots of channels. 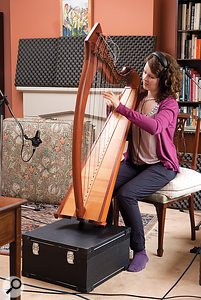 The harp was initially positioned on an empty accordion box, but the sound was improved by seating the instrument on the floor.

I was unable to take any monitors with me to this particular session, but wasn't initially too concerned about this, as I had some good headphones that I was familiar with, and knew that I'd at least have access to a home-cinema-style stereo speaker setup to review takes as a group, and give me a break from the headphones, which I find I need to do from time to time.

Getting To Know The Harp

When we began to approach the harp recording, Fliss Jones, the harpist, initially set up in a seated position with the harp resting on top of an empty accordion box, simply in an attempt to place at a comfortable height for playing. Such boxes can, of course, act as rudimentary amplifiers, so I walked around, listening to the instrument, particularly keen to hear what effect this box would have on the sound of the harp. It's a good job I did, because I didn't like what I heard, and thus suggested that we try an alternative setup, using a lower chair for the performer and with the harp itself seated on the floor. We all agreed that this improved the sound, with a better overall clarity to the notes, particularly in the lower octaves.

Given that I'd not recorded the harp before this, I spent a little time listening to Fliss play, trying to get a good feel for how the sound was being produced and projected by both the instrument and the player. Harps have a soundboard which resonates when the strings are plucked, and this helps project the sound. As this soundboard is in contact with the player it also affects how the musician hears him- or herself while playing. The spread of high- to low-sounding strings, the pitch of which is determined by their length and tautness, is not unlike a piano, and this suggested to me that there might be some benefit in trying make a stereo recording, even though we were dealing with a fairly narrow spread on a small folk harp.

Fliss was keen to explain to me how she'd felt slightly disappointed about previous recordings of her harp, and I actually found it really helpful to hear her talk about getting an even balance between the 'pluck' and sustain of the strings, as well as the importance of the low and high strings sounding balanced volume-wise. Of course, this did put me under a little pressure! 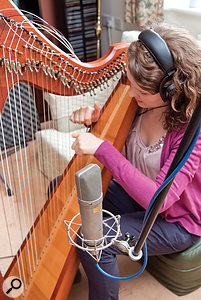 Miking the harp with a single capacitor microphone, positioned two feet back from the centre of the strings.

I saw little value in putting mics either side of the strings as there seemed no real variation in sound and the potential for obvious phase problems. I always like to establish a good one-mic starting point when approaching an acoustic instrument, so I set about finding a good spot for my Neumann U87 capacitor mic, set to its cardioid polar pattern. I found a spot I liked about two feet back, pointing to the centre of the strings. Small adjustments to the left or right seemed to adjust the balance of the low to high strings in quite a controlled way and adjusting the distance from the strings seemed to offer some control over the amount of 'pluck' as well.

We also experimented with my Royer SF12 stereo mic and, as I wanted Fliss to know that we were capturing what she was playing, I found a good spot as close to her ears as I could! As I suspected, there wasn't a great deal of high to low spread, as you would get with a good stereo piano recording, but it was a faithful representation of the instrument. As with any recording however, it's all about hearing the parts to be recorded in context so we made a few test recordings and I invited Fliss to my coffee-table control area to briefly review the options. 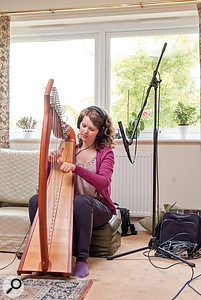 An alternative mic technique, with a stereo ribbon mic positioned close to the player's head.

As we sat listening on a mixture of the home stereo speakers and my Beyerdynamic DT770 headphones, I found myself craving my studio control room, which I know so well. Fliss was giving her opinions about the sound in great detail whilst listening to the quite heavily coloured home hi-fi speakers. I explained my concerns and encouraged her to use the speakers to judge performances and use the headphones for tonal judgements. At this point, although the stereo recording was nice in isolation, it was struggling to compete with the other components in the track. The brighter capacitor mic was clearly a more 'mix ready' sound and after a small adjustment to the mic position, to make sure some of the lower notes were being captured, we began recording.

We had four tracks to record harp parts for, and the recording process passed off fairly smoothly. We briefly reviewed the mic position as we began each new track, and made slight adjustments depending on where Fliss was playing on the strings. I don't like to have dozens of takes to work through when I return to the studio, so I work with the musician to achieve broad agreement on takes as we go, and I'm not afraid of hitting Delete. For all four songs, we began by doing a couple of passes through the whole track, aiming to capture a nice flow and feel over the song, before going into more detail and tightening up specific sections until we were happy.

As you've read in these pages many times before, capturing a good sound at source will make the ensuing mixing process a breeze. In other words, it's well worth taking the time to capture the 'right' recording. Achieving this 'right' sound, though, is always a balancing act of sorts, and it's often a relatively tricky one when working on location. That said, for this particular session, the whole process of choosing suitable mics for the harp and finding a sound I was happy with took only about 30 minutes in total. The full session lasted a full eight hours, though — so what on earth did I spend all that time doing?

Well, I may be a firm believer in the virtues of trusting your early impressions and getting on with recording as soon as possible, but that doesn't mean rushing my recordings. I spent a considerable amount of time learning the sound of both the instrument and the room, in order that I could more easily discover the best mic positions and make sensible subjective decisions, despite the less-than-ideal monitoring environment. Of course, the musician is also critical to a great recording, and I spent plenty of time working closely with the harpist to understand the nuances of performance and the sound of her instrument. Of course, throughout the session I was also constantly considering the wider context of the track in which this recording would sit.

So what have I taken — and what lessons can you take away — from this session? For me, it reminded me that recording new instruments is almost always an enjoyable and rewarding process. For my future location endeavours, however, this experience suggested that I need at least to make sure that I have a table and chair of a sensible height to sit at for the four hours that inevitably turn to eight... and I really do need to make room in my car somehow for my monitors, no matter how good the headphones I plan to use!

Listening To The Room

Stepping outside my studio for the first time in a long while not only left me with my eyes squinting at the light, but presented me with fresh new challenges, to which I'm sure many home recordists can relate. I've become very familiar with the acoustic of my own studio, which makes it easy to get results very quickly, but each location session means there's a new space to learn. The inevitable time constraints of such sessions mean that it's necessary to make quick judgements on each new recording environment. I like to form an initial judgement about a room by simply walking around listening to how voices sound in it: the human hearing system is particularly sensitive to speech, so if this sounds good in a room, that's often a good indicator that there are no particularly strange problems in the critical mid and low-mid-range areas of the frequency spectrum. Walking around, doing a few loud handclaps as you go, can also help you get a feel for a room's reflections and identify any problematic flutter echoes. As mentioned in the main article, this particular room sounded pretty dry, but although it was perhaps a little characterless, it did at least seem pretty safe, in that I couldn't hear any obvious gremlins, or any massive variance in the sound between one part of the room and another. 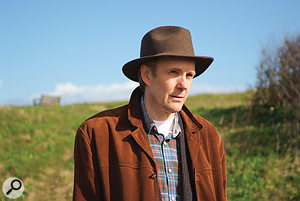 James VardaOriginally from London, but now residing in Norfolk, singer/songwriter James Varda has been writing and recording his unique brand of folk music for 25 years now. During this time he's released three critically acclaimed albums and has recorded and toured with the likes of John Leckie and Nick Harper. Released in early 2013, his last album, The River And The Stars was described by R2 magazine as "a collection of songs that demand your attention”. The harpist on this session was Fliss Jones.

I've prepared a couple of audio files to demonstrate the results of this session, including a snippet of the raw harp sound as recorded, and one of the harp in the context of a rough mix balance.