The Practical Craft Of Recording By Mike Senior

Recording Percussion: Our engineer navigates past the potentially painful pitfalls of recording the humblest of percussion instruments.

Given how cheap those little plastic egg shakers are, it’s no surprise that they crop up frequently on budget productions. Unfortunately, they’re often a pain to mix.

Many engineers reach for capacitor mics for percussion, on account of their extended high-frequency response and fast transient response. The high frequencies of percussion instruments have also been emphasised on many famous recordings by working close up to the mic (favouring the brighter direct-sound components) and positioning the shaker on-axis to the mic (most condenser mics apply several decibels of HF boost). This approach gained currency during the age of analogue tape recording; tape, by its nature, struggles to reproduce a natural balance of high frequencies and transients at the best of times, and further degrades things as the tape is played and replayed. Back in those days, then, recording percussion with a spiky and over-bright sound was a commonplace workaround to compensate for the smoothing and dulling effect of the recording medium.

This has little relevance when using modern digital recording gear, though, something that’s evidenced by the modern resurgence in popularity amongst professionals of dynamic (and especially ribbon) mics for percussion. 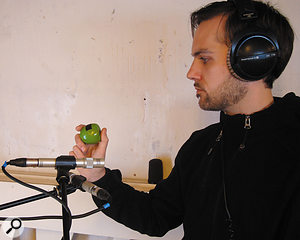 The idea of creating a moving stereo effect drew the band to the idea of recording their shaker part right up against Mike’s near-coincident stereo microphone rig. While this did produce the desired stereo interest, it was to the detriment of the instrument’s tone and mix blend.Despite this, many recording tutorials still promote techniques handed down from the ‘golden age’ of tape-based studios. I suspect that this, combined with the brightness of many a budget large-diaphragm capacitor mic, is why most egg-shaker tracks on home-brew recordings sound spindly and harsh when placed at any useful level in the mix, and why they require serious effects work to blend them with other instruments in the arrangement.

In this article, I’ll offer some tips for getting a more mixable sound from this instrument, taking examples from my overdubbing session with indie-rock band Brushes Held Like Hammers.

When the band brandished their egg shaker (or rather, a similarly proportioned ‘green tomato shaker’!), I planned to use a different approach. One important factor in my decision was that what most listeners perceive as the ‘natural’ sound of high-register percussion instruments is usually rich in acoustic early reflections, yet close-miking tends to discriminate against sonic reflections. So I made a point of removing some of the room padding I’d installed for the preceding full-band tracking date (featured in a previous ‘Session Notes’: http://sosm.ag/sessionnotes-BHLH) and positioned the performer close to as many hard, reflective surfaces as possible. My intention was to locate my mic rig at least two or three feet away, using a stereo array to give the instrument some width in the mix.

Given that the shaker had to compete with heavy cymbals and electric guitars, I still opted to use capacitor mics to capture sufficient high-frequency energy, but chose a pair of relatively unhyped small-diaphragm models that I often use for acoustic recordings: Shure KSM141s. These still have a little on-axis boost, but only in the order of a couple of decibels — some mics, especially large-diaphragm models, can push the highs by 6dB or more. I also opted for a crossed-pair stereo setup that placed the shaker off-axis to both mics, which meant the high-frequency response became a decibel or two weaker in general. 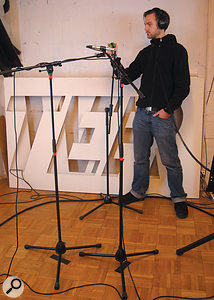 Moving the microphones about three feet from the shaker brought about a markedly more natural tone, although Mike was still concerned that the sound was too present to cohere with the rest of the mix.Rather than leaving it as a straight X-Y setup, however, I added a few inches of spacing between the mic capsules, to add a touch of that involving diffuseness that time-difference stereophony offers. I knew that this would reduce the mono-compatibility of the capture, but I wasn’t overly worried about that for an incidental arrangement layer like this.

The moment I put up a stereo pair, however, the band became enthused with the idea of orienting the performer’s natural playing motion horizontally across the mic array’s acceptance angle, causing the shaker image to flit rhythmically back and forth across the stereo panorama, something which was only practical with the instrument within a few inches of the mics!

You’ll seldom endear yourself to musicians by pouring cold water over their creative impulses, so I swallowed my technical reservations and moved the mics in close so we could hear how it sounded. This configuration did indeed generate an entertainingly wide stereo movement, but the part’s raw sonics were pretty much as I’d expected: over-dry, lifeless and lacking in density. Nonetheless I gamely recorded a pass, before summoning everyone into the control room to express my concerns.

Once the novelty of the stereo effect had worn off, the others also acknowledged that the shaker was sounding rather anaemic and ‘spitty’ in the context of the mix, at which point I suggested trying out a quick alternative for comparison purposes — namely, my initial plan of a more distant mic position without the auto-panning. It took about 30 seconds to arm new tracks, move the mic stand another foot or so back, and hit Record. 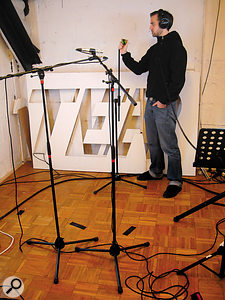 The final recording position for the shaker can be seen here, four or five feet from the instrument in comparatively reflective surroundings.Reconvening after the new take, a few comparisons quickly satisfied us all that the more distant miking was clearly preferable, more than compensating for the missing stereo gimmickry — especially as the stereo miking was still producing a decent image width even without the side-to-side motion. Experimenting further with the control-room balance, however, I was worried that the shaker was too present and didn’t blend sufficiently with the rest of the band, so I suggested that we try one more quick pass with the mics another couple of feet back. Directly comparing this recording with the previous one, we again came to the consensus that it was another positive step (albeit a more subtle one), because the shaker now seemed to sit more easily in the mix as a whole.

But don’t take my word for it: have a listen for yourself by checking out the audio examples I’ve put together (http://sosm.ag/apr15media). These include recordings of each of the three mic setups, both in isolation and within the context of the whole backing mix.

Although the main point of this article was to persuade you to think twice before miking percussion instruments extremely close, this recording session also illustrated a powerful principle of studio psychology that bears underlining. Although I was pretty certain the band wouldn’t be happy with the sonic ramifications of their acoustic auto-panning experiment, I feel it was much better to let them record it and arrive at that conclusion for themselves, rather than try to argue against them in the abstract. Because I gave them the benefit of the doubt by following through on their idea, they were more inclined to return that favour once the shortcomings of the first take were laid before them. The positive outcome we arrived at through my alternative suggestions can’t have harmed the band’s confidence in my engineering skills, either, which is an important consideration on any session — especially when you’re working with people for the first time, as on this occasion.

Or, to look at it another way, let’s say I’d instead dismissed the band’s stereo idea out of hand as a waste of time. Not only would that have frustrated and antagonised them in the first instance, but I’d also have found it harder to enlist their support for my second miking variation a few minutes later. Moreover, I’d have missed the opportunity to demonstrate in the most concrete terms (by direct comparison and consensus) the value of something I’d contributed to their project.

So I recommend cutting musicians the slack to indulge their creativity. It isn’t just good for them; it’s usually good for you and, more importantly, good for the music too.