The silent studio is a real possibility now that solid‑state drives are offering unrivalled transfer rates, free from mechanical noise. So why aren't we all switching over? 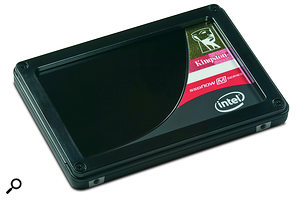 Solid-state drives, such as the popular Kingston model shown here, are an ideal way to minimise boot‑up and application launch times.

Most modern mechanical hard drives spinning at 7200rpm manage between 100MB/second and 150MB/second sustained transfer rates, and slightly less than 10ms access times as their read/write heads whizz about getting to the appropriate location on the magnetic discs. However, SSDs (solid-state drives) offer sustained transfer rates of over 200MB/second and amazing random access times of a fraction of a millisecond, which means that using an SSD to install Windows and its applications will give you significantly faster boot‑up and application launch times.

Rather like a USB flash drive (but without the bottleneck of its USB 2 connection), the SSD relies on Flash memory for its storage and, therefore, has no moving parts, making it more rugged. This aspect of its performance makes it attractive to musicians both on stage and in the studio; its lack of moving parts results in lower power drain and renders it completely silent.

So why aren't we all swapping over? One reason is cost. For a similar outlay to a 2TB mechanical hard drive (that's 2000 Gigabytes) you're only likely to get a 64GB solid-state drive, which is about the minimum capacity you'd need to install Windows and a few applications.

This means you'll probably need two mechanical hard drives as well — one for audio streaming and the other for sample libraries — and, given that most audio applications rarely access the Windows drive or partition after their initial launch, this means the SSD is only offering you the advantage of a faster start‑up time, and no real‑time performance enhancements.

Another down side is that the memory cells of solid-state drives eventually wear out. Admittedly, though, they tend to be rated for tens of thousands of read/write cycles and, therefore, have a lifespan of many years.

Flash memory is also typically accessed in 512KB blocks, so if you only need to store a single kilobyte, this happens very quickly with an empty SSD. However, once the drive is partly filled, that same kilobyte of data might require a 512KB block with at least a kilobyte of empty space to be read into a cache, have the new data slotted in, and then the resulting 512KB block written back again. More overheads!

Installing a solid-state drive in your audio PC is currently considered a luxury but, as with all computer storage options, prices will drop and overall performance will improve. I'm sure it won't be long before we wonder how we managed without them, as the silent studio gets ever closer! 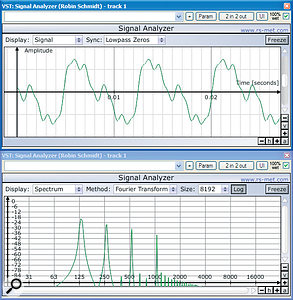 Robin Schmidt's freeware Signal Analyzer is a great tool if you want to learn more about waveforms and harmonics.

Back in PC Notes June 2007, I discussed the new VST3 preset format first used in Steinberg's Cubase 4 (and now in its successor, Cubase 5). Along with Steinberg's MediaBay database functions, the VST3 format allows VST plug‑ins and instruments to be tagged with styles and characteristics, such as Acoustic/Percussive or Clean/Dirty.

Of course, all Steinberg's new bundled instruments and plug‑ins have sets of carefully tagged presets, and Cubase 4 or 5 will happily import presets in Steinberg's older VST2 FXP/FXB formats, so various helpful users, spearheaded by Jan Lanter of Lanter Audio, have subsequently carried out the donkeywork, converting a swathe of third‑party preset banks into the new VST preset format (http://projects.lanteraudio.nl/downloads/cubase).

However, Cubase 4 and 5 will only save presets in the new VST preset format, which has proved to be a real annoyance for many Cubase owners who want to share their presets with users of virtually every other VST‑compatible sequencer that only loads FXP/FXB. There's even a poll on the Cubase forums pleading for FXP/FXB save functions to be added to Cubase 5.

Fortunately, help is at hand from third‑party developer IndyGo, whose small FXTractor utility (www.indygo.de/fxtractor) allows you to drop VST preset files or complete folders onto its window and have them converted to FXP and FXB formats. It's still at an experimental stage, with no guarantees, but has been tested on Windows 2000, XP, Vista and 7. So if you've got VST presets that you need to share with other sequencer users, why not give it a try?

Robin Schmidt has some intriguing PC‑only shareware products on his web site (www.rs‑met.com), such as the Straightliner subtractive synth and the very flexible Echo Lab effect. He also offers a range of very useful freeware 'Music Engineering Tools', including a particularly useful MIDI Monitor that lets you filter out various MIDI data options. Anyone who has needed to examine the output of their MIDI keyboard or controller in the past, during a fault‑finding session, and got frustrated by an endless scrolling stream of FE Active Sensing messages emerging from it, can finally make them disappear for good!

However, for me the most useful tool in Robin's collection is his new freeware Signal Analyzer. It does take a lot more CPU power in its spectrum analyser mode than others in my collection, but I think this is outweighed by the convenience of being able to switch instantly between frequency and time domains (i.e. spectrum analyser to oscilloscope). You can learn a huge amount by studying waveforms and which harmonics they generate!