Who doesn't want a cool drum track to develop a song against, instead of the click‑click‑click of a metronome? The trade‑off is that the metronome is ready as soon as you are, which can be important when you're in a creative frenzy, whereas a drum part takes time to program. Or does it? There are actually several different ways to use Session Drummer 3 (SD3), ranging from quickie, glorified metronome to sophisticated tone module.

If you've used Session Drummer 2, you can jump right in. The most obvious difference — eye‑candy graphics aside — is having 12 drum channels instead of 10. If you're not familiar with Session Drummer, keep an open mind. It's a capable sound module that can open samples, patterns that trigger kit sounds (if you want to treat SD3 more like a drum machine), or programs, which combine a kit with a specific set of eight patterns.

One of my favourite features of SD3 is that it's easy to create custom kits for it, because you can drag just about anything on to an SD3 pad — AIFF, WAV, FLAC or OGG files — at any sample rate, with bit depths from eight to 32 bits, mono or stereo. Each pad can also load SFZ‑format definition files, as described later, to use your own multisampled sounds. (You can load loops, too, but they won't stretch with tempo.) A less obvious difference, new to V8.5, is the inclusion of far more content: patterns, drum kits and programs. Of course, you can still 'roll your own', but having the extra content makes it easier to get something together quickly. Incidentally, the Drumkit page takes up a lot of screen space, because it's the same size as the Mixer page.

This way of using SD3 is for when you want to get up and running as fast as possible. First, insert SD3 into your project. It won't do anything, because nothing's loaded, so load a program by clicking on the Prog field in the lower left, which fills SD3 with a kit of sounds and eight patterns. Select a pattern to serve as a metronome, click on Loop Pattern (the infinity-sign button), and click on Play. You needn't record anything; SD3 will play along with Sonar, starting and stopping based on Sonar's transport, auto‑locating based on the Now time. If you find a universally applicable 'point of departure' pattern, you could also save a template project with SD3 inserted and the desired program/kit selected. Then, when you call up the project, everything's ready to go. However, suppose the metronome pattern starts growing on you and you want to use it with a couple of slight variations. Click on the Note button (to the right of the MIDI pattern name field), then drag and drop the note into a track. This copies the MIDI file to the track where you can now edit it, turn it into a groove clip or roll it out to whatever length you want, for example.

Dragging the note symbol to a MIDI track copies the currently selected pattern to the track.

Each SD3 pattern responds to MIDI notes: MIDI note #27 triggers pattern A, note #28 triggers pattern B, note #29 triggers pattern C, and so on, consecutively for eight notes in total. When you insert SD3, Sonar loads a drum map, which labels the notes that trigger patterns with the pattern letter (of course, there are also names for the various drum sounds). 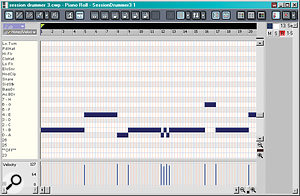 The Piano Roll view's Drum Map shows that notes were played to trigger patterns A, B, E, and G. If you want to augment the patterns with additional hits, you can still play individual notes on top of the patterns while they play.

To capture an improvisational feel, turn on SD3's loop button and start recording. Play the keys that correspond to the patterns you want to hear and the patterns will play back as you triggered them. This is really handy if you already have the patterns you need to create an arrangement, as you can simply string them together, drum machine‑style, to create the kind of drum part you want.

The patterns that load with a program are intended to be appropriate for the kit, but you might not agree with the choices. You can choose different patterns within SD3's Drumkit page by clicking on the MIDI field in the lower left and selecting Load Pattern. However, it's actually faster to use the Media Browser. Here's how to set it up for fast auditioning:

The Media Browser makes it possible to audition patterns for SD3 faster than you can audition them within SD3 itself.

4. Expand the Patterns folder to reveal folders of loops from Groove Monkee, Smart Loops, and Steven Slate and Jerry Lyons.

5. Drill through the folders, as appropriate, until the right pane fills with patterns.

6. You're now set up and ready to audition.

Click on a pattern in order to play it (this assumes the Media Browser's Auto Preview function is on, otherwise you need to click on the Media Browser Play button). It can be very inspiring to call up the 'wrong' pattern or 'wrong' kit. Try loading a rock pattern into a TR909, or a drum & bass pattern into a jazz kit; you might be surprised at the results.

While you're in the Media Browser, if you like a pattern, double‑click on it to insert it into the currently selected MIDI track at the Now time. This process also makes it easy to build up a drum part from simple patterns. For example, suppose you find a kick‑drum pattern you like: double‑click on it to insert. Then, let's say you find a perfect hi‑hat pattern. If you double‑click on it without changing the Now time or track, it will layer in the same track, on top of the kick pattern. If the patterns aren't the same length, it's no problem. Turn on the Track Layers to see each pattern in its own 'lane' within the track. Here you can lengthen or shorten particular patterns. For example, if the kick pattern is one measure long but the hi‑hat pattern is four measures long, you can roll out the kick pattern so that it's four measures long as well. If you want to keep separate lanes for separate patterns, fine: that allows for the most editing flexibility. But if you want to bounce them all into a single MIDI track, select all of them and go Edit / Bounce to Clip. Turn off Track Layers, and now you have a single clip that incorporates the parts from all layers.

To use your own multisampled sounds, you need to create an SFZ‑format file to define the sounds, but this isn't difficult: open a text file, enter a few lines of code that define file paths and playing characteristics, then save the text file with the suffix .SFZ. Drag this file onto a pad and trigger the sounds. The samples and SFZ file can reside anywhere, but I'd suggest keeping them in the same folders as existing content (Vstplugins / Session Drummer 3 / Contents / Kits). You'll see numbered folders with specific drums inside the Kits folder. Create a similar folder that contains the samples you want to use, and save the SFZ file in this folder, as that simplifies specifying the path. For example, imagine you have some big snare drum samples at low, medium and high velocities. Create a folder such as '20 – BigSnare' to hold the samples, then write the following SFZ file. You can include comment lines by adding // in front of them.

The Group line specifies the MIDI note that should trigger the samples (in this case, MIDI note #35) and the looping mode, which is one‑shot. The remaining Region lines specify the path to a particular sample and the velocity range over which it should play (lovel is the lowest velocity value, hivel is the highest). Regarding syntax, the SFZ file format is pretty tolerant, but just make sure that there are no spaces within a parameter (for example, 'lovel=101' rather than 'lo vel = 101'), unless the space is part of something like a file name. Simple!

Distant City Studios - A Drum Room With A Difference
1 month 1 day ago.