Cure those conflicting frequencies and create some space with Logic's Match EQ.

One of the greatest challenges when mixing is choosing sounds that don't conflict. For example, in an ideal world, the kick drum and bass guitar would keep out of each other's way, to help them retain their individual identities, while the mid‑range instruments, such as guitars, would leave room for the vocals, which so often end up competing for space. [We explored this subject in greater detail in the September 2011 issue of Sound On Sound, in the article called 'Kicking Bottom'.]

A large part of making this happen comes down to musical arrangement and a sensible choice of sounds, but there is a neat little trick you can also try using Logic's Match EQ in a slightly unorthodox way, to help reduce spectral overlap. This technique can be applied to virtually any instrument but, in this example I'm using it to modify the sound of an acoustic guitar that was tending to cloud the vocals.

As an example while writing this workshop, I used a track where the acoustic guitar sound was a little too full‑bodied to allow the earthy male lead vocals enough space. Where more than one instrument is causing mid‑range congestion, it is easy enough to apply this exact same technique to a submix routed via a bus and, of course, the following procedure isn't confined to use only with vocals.

The standard approach when mixing is to use a parametric equaliser to dip out conflicting frequencies but, in the case of vocals, you'll often find that the spectrum of the voice includes many peaks and dips that are just too complex for conventional EQ to deal with. In other words, standard EQ is just too blunt an instrument. Instead, I'm using Logic's Match EQ, which is normally used to make the spectrum of one sound more closely match that of another.

In this example, though, I'm using it to make the spectrum of the acoustic guitar less like that of the vocal, giving both space to co-exist. Rather than trying to explain the process as a whole, I'll go through the acoustic guitar/voice example a step at a time.

If you run the guitar track soloed, you should now hear that it has gained a lot of mid-range boost, making it take up even more of the vocal spectrum. 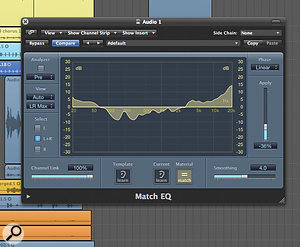 Reversing the Apply Fader settings creates the curve that we are trying to achieve.Obviously, this is the opposite of what you want to achieve, but if you now move the Apply slider down past the mid/flat position, you'll see that it starts to apply EQ cut where initially it produced boost. 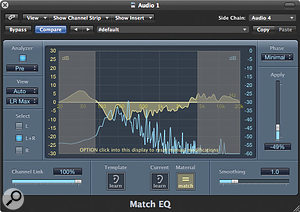 Our final EQ curve should look like this.You can then adjust this amount of cut while also listening to the vocals, to establish the best compromise between an excessive change in tonality and better separation.

In the case of acoustic guitar, the tonal change is usually quite musical, and you may even want to try this trick as a way of improving the acoustic guitar tone even where there is no obvious separation problem.

The technique could just end there, but if you look at the EQ spectrum applied by Match EQ, you'll see that a significant amount of high and low boost has been added outside the main frequency spectrum of the vocals.

While you can make graphical adjustments to the EQ curve, they never seem very precise to me, and a simpler way to reduce the amount of low and high boost is to click on View in the plug‑in window and then select Controls, which shows you the controls as a simple set of sliders.

Often, Logic's Control view includes adjustments not available on the main screen, and that's the case here. Around two thirds of the way down the window is a tick box called Fade Extremes, with two sliders below it. 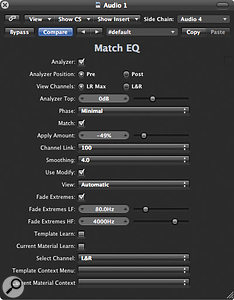 In Control View Settings, make sure the Fade Extremes box is ticked, and then adjust the settings as shown.

If you find you have too much high and low boost, the simplest fix is to use a conventional shelving EQ to drop the levels of the extremes.

You can make further tweaks to the EQ's sound by selecting Minimal or Linear in the Phase box at the upper right of the screen. The Linear EQ seems to produce a sharper, more focused tonality, while Minimum sounds more 'analogue'. You can also adjust the smoothing slider on the bottom right of the screen to reduce the amount of detail in the EQ curve, although I generally find it sounds OK left in the default position.

That's pretty much it: a very simple technique using a plug‑in you already have, but one that can really help open up a crowded mix.