Use your Cubase reverbs as spot effects.

Ambience effects such as reverb and delay can obviously be used to give a sound a sense of ‘real’ space, but you don’t have to confine your use of reverb to the ‘natural’ — and it doesn’t have to be a set-and-forget effect either. In this workshop I’ll take you through some examples of ‘spot’ reverb effects, and explain how you can create them in Cubase.

I’ll use Cubase’s REVelation algorithmic reverb plug-in for the examples, but you could use any reverb plug-in you wish. I’ve also created some audio examples (which you can find at http://sosm.ag/apr15media) so that you can hear the sort of thing I’m describing.

A classic and very effective spot reverb effect is to create either a reverb ramp or a reverb ‘hit’, both of which are placed to fill an obvious pause or stop in the arrangement. For example, if you have a stop at the end of a song section and a few beats of silence, a big splash of reverb to mark the transition, perhaps applied to a synth sound or a final kick-drum hit, can be very effective. Any number of approaches may be used to achieve this, but let’s focus on two simple examples, each of which can easily be created using Cubase’s automation system.

First we need to add an FX Channel with an instance of REVelation. For this kind of ‘notice me’ effect, it’s easiest to choose a preset that’s based on a large space, and which has a long reverb time — the Large Natural Hall preset makes a decent starting point. REVelation has some controls for adjusting the tonality of the reverb (high- and low-pass filters for instance) and it can be a good idea to roll off the bottom end of the reverb to avoid things getting muddy. Your Cubase FX Channel also features high- and low-pass filters before the reverb, of course, but I often insert an EQ plug-in before my reverb plug-in. That way, I know I’ll have more versatile filtering options to hand should I require them later. 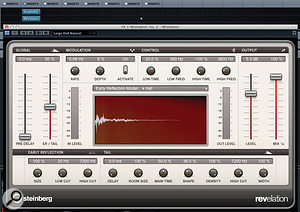 REVelation provides some excellent reverb treatments that can be used for spot effects and, because it is fairly CPU efficient, you can run multiple instances suitable for different tasks within the same project. For spot effects, you can also generally use one of the bigger hall-style presets as shown here.

Automating the send levels to REVelation can be used to create some big splashes of reverb for special effects; feel free to go over the top with the send levels as shown here. Next, you need to pick the target track (or tracks) to which you want to apply the effect. In the screenshot (above) and audio examples, I’ve used two different tracks. On the main synth part, I’ve drawn an automation curve to ramp up the reverb send level in the two bars preceding the ‘stop’. In addition, on the first beat of the ‘stop’ itself, where a kick drum hits and everything else stops playing, I’ve used automation to apply a short (one-beat long) but very large dollop of reverb to my drum track.

The result is a very noticeable but quite short ‘hit’ of reverb as every other instrument drops out. And, for good measure, as the snare roll builds up to the next song section, I reversed the reverb send ramp trick, this time starting with lots of reverb and quickly returning back to almost none over the course of the one-bar roll. Note that this is just for demonstration: any one of these effects would have been fine on their own, and you’ll probably want to exercise some restraint when adding ‘fairy dust’ effects like this.

Another ‘spot reverb’ effect is more about removing spots than placing them, and as much corrective as creative, but it’s a neat trick that can help your drums punch through in a busy mix.

First, place an instance of the Compressor plug-in after REVelation in the FX Channel, and activate its side-chain input so the compressor can be triggered from another audio source. Then, configure a send from the drum track to trigger the compressor. Used with fast attack and release settings, a low ratio (try 2:1 for starters) and a threshold setting that only triggers the compressor for the main kick and snare hits, this gently lowers the reverb level present in the mix every time the drum tracks trigger the compressor. The effect is subtle but allows those drum hits to be heard more clearly. You can create a more deliberate and hopefully more interesting effect, whereby the reverb ‘breathes’ a little more noticeably in time with your drum track, by winding up the compression ratio (Cubase’s bog-standard Compressor plug-in offers a maximum ratio of 8:1).

A variation on this approach is to replace the compressor with a gate. Gated reverb became a bit of cliché in the 1980s but when used for occasional spot effects, rather than being plastered across the whole track, it can still be very effective. Most reverb plug-ins — REVerence included — include a few gated reverb presets, but if you want more control, you’re better off placing Cubase’s Gate plug-in on your FX Channel in an insert slot after your reverb. Not only does this allow you to fine-tune the operation of the gate but, as with the compressor, you can also trigger the gate from another audio track via its side-chain input. 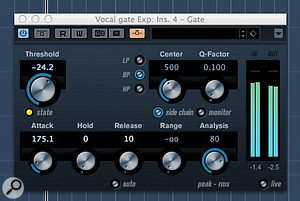 Using the side-chain input on both the Compressor and Gate plug-ins allows you to create some interesting reverb effects if you insert these effects alongside the reverb in your FX Channel.There are lots of possibilities here but, as an example, how about a sort of ‘delayed reverb effect’ on a vocal? To achieve this, create an FX Channel with REVerence and choose a fairly ‘big’ reverb sound — you want something noticeable, as this is a special effect — and configure sends to this effect from your vocal track, and from any other elements of the mix to which you want to apply this effect. Then insert the Gate plug-in after REVerence and enable its side-chain input. As shown in the screenshot, adjust the Gate’s attack to something other than zero (the 150-200 range is a good place to start).

Next, set up another send from your vocal track to Gate’s side-chain input. In essence, we’re getting the vocal to ‘self-trigger’ the gate controlling the reverb effect that’s applied to the same vocal. However, because we’ve set a slow attack for the gate, it only opens (letting the reverb be heard) after the initial attack of each word has passed. If you adjust the balance of the threshold and attack settings to suit the volume and tempo of the vocal, you end up with a splash of reverb on any audio source that’s being sent to the FX Channel towards the end of each word. If you ‘overcook’ the reverb level sufficiently, the reverb adds a kind of ghostly volume swell that, as a spot effect, can be very effective. Oh, and try adding an instance of Auto Pan after the Gate and listen to your reverb effect add some stereo interest too. 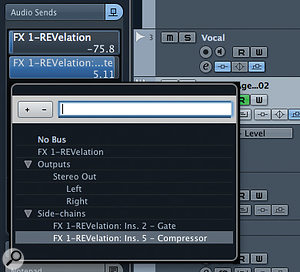 Once activated within the plug-in, you can select the side-chain input of the Gate or Compressor plug-in as a send destination from any audio source via the Track Inspector. There are plenty of other gate-related options, but a favourite of mine is to use the Cubase MIDI Gate instead of the standard Gate plug-in and then create a MIDI track to drive the gate’s open/close state. Used in this way, you can easily create a rhythmic MIDI part that controls when the reverb might be heard. I find that this can be very effective on vocals, drums or synths.

Another nice spot effect is to create a tonal change to the reverb that’s applied to a specific sound. This can work well, for example, in a breakdown section, where you have a solo synth or drum part carrying a few bars of the arrangement on its own. It makes a nice change from applying the EQ/filter to the source sound itself. 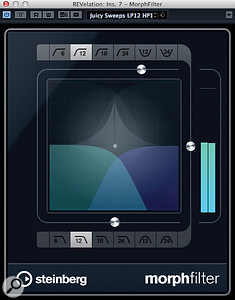 If you want to create a more noticeable tonal effect to your reverb sound, MorphFilter provides an efficient way to do it and the controls can, of course, be automated. REVelation has a number of controls for changing the tone of the reverb output and automating these is one option. For a more dramatic effect, though, I like to insert an instance of Cubase’s MorphFilter (the Juicy Sweeps presets make good starting points) after REVelation. Again, for this to work well, apply a slightly higher send level from the instrument track concerned to make the effect more obvious and then automate your adjustments to MorphFilter’s X-Y panel. This trick can spice up a short breakdown section very nicely.

Once you start experimenting with these more creative, ’spot’ effects for reverb, it’s easy to think of all manner of possibilities. Something I haven’t mentioned so far, though, is reverse reverb. In all honesty, it has become something of a cliché, but used sparingly it can still be effective — so I’ve included two short vocal examples in the audio examples provided along with this article. These include a more ‘traditional’ application, where the reverse reverb simply provides a riser effect into certain words in the vocal part, but also a slightly less conventional example that can serve to create some rather spooky ‘harmony’ backing vocals. Enjoy!