Studio One: Working With MPE 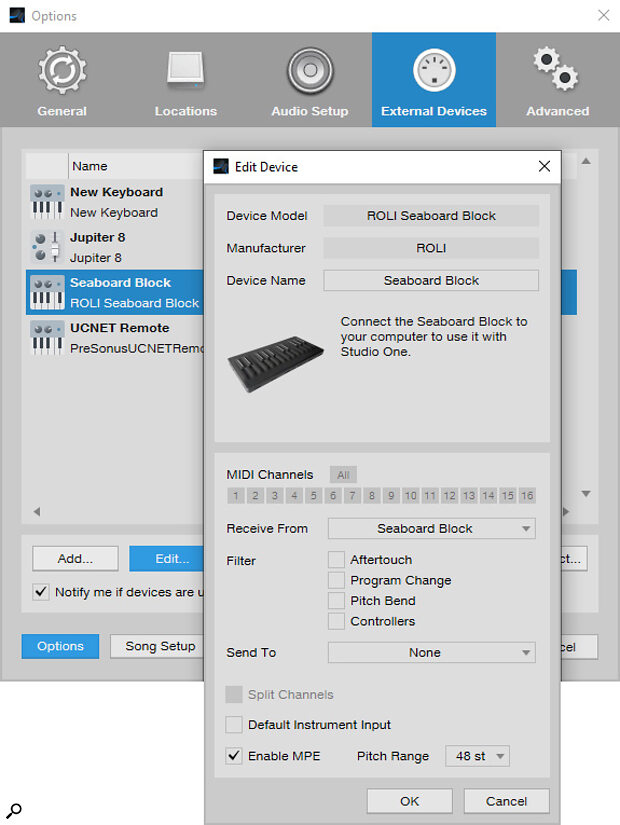 Screen 1: Setting up the ROLI Seaboard Block as an MPE controller.

We offer guidance on working with MIDI Polyphonic Expression (MPE) in v5 of Studio One.

In our first look at version 5 of Studio One I’m going to spend some time looking at using MIDI Polyphonic Expression, or MPE. MPE is where individual notes can have their own expression data, allowing you to use pressure and other playing techniques to affect notes separately. In other words, you can play a chord and use pitch‑bend or aftertouch on each note independently within that chord. To take advantage of this expressive way of playing you need an MPE hardware controller like the ROLI Seaboard, Sensel Morph or Linnstrument, and an MPE‑compatible synthesizer or virtual instrument.

There’s very little in the Studio One 5 manual about how you get it to work. It’s something I struggled with a bit when I was writing the review because there was a key piece of information missing. Unfortunately I only got the solution moments before my deadline, but now that I’ve had a bit more time to work with it I can take you through how to set it up so you don’t fall into the same trap that I did.

Setting Up The Hardware

I’m using a ROLI Seaboard Block, the simplest of the ROLI controllers, but the setup should be similar for any MPE controller. In the Options menu under External Devices you add a new keyboard, and for the Seaboard Block I could simply select it from the list. If your specific controller isn’t listed, then you can create a ‘New Keyboard’ and the setup is exactly the same.

When you edit the device the important setting is the Enable MPE tickbox at the bottom (see Screen 1, above). Ticking this will grey out the MIDI channel selector, because MPE needs all the MIDI channels to do its magical per‑note‑expression thing. You also have some control over the pitch‑bend range.

That’s it, your MPE controller is ready to go, and will work as a regular MIDI controller as well. If you’re connecting to a hardware MPE‑compatible synthesizer then you are all set. If you’re using software then you won’t be able to pull off any of that MPE expressive performance until you’ve set it up correctly.

Setting Up The Software

The first thing to know is that none of the bundled PreSonus virtual instruments are, at the time of writing, MPE compatible. So, you will have to install a third‑party virtual instrument that has MPE support. The second thing to know, and this is what tripped me up during the review, is that Studio One currently only supports MPE on VST2 plug‑ins, not VST3 plug‑ins. Normally when you install a VST plug‑in it will install both the VST2 and VST3 versions, if both versions are present. The way Studio One handles plug‑ins is that if there’s a VST3 version available it will hide the VST2 version in the list of available instruments. If you’re confused about which version of a plug‑in is installed you can click on it in the Studio One Browser and it will tell you at the bottom. I spent a great deal of time failing to get sound out of the ROLI Studio Player because I was using the VST3 version.

Studio One currently only supports MPE on VST2 plug‑ins, not VST3 plug‑ins.

The way around this is to move, delete or rename the extension. Renaming the plug‑in file doesn’t work, unfortunately. You could disable VST3 support in the Advanced Services settings, but that would kill off other perfectly functional virtual instruments, so the deletion or movement to an unrelated folder seems like the best solution. In Windows, you’ll find the plug‑ins in C:\Program Files\Common Files\VST3. On a Mac, they’re in Library\Audio\Plug‑ins\VST3.

There’s an added complication with the ROLI Studio Player software with Windows, in that it installs the VST2 version into a unique location that Studio One won’t, by default, scan: C:\Program Files\Common Files\Steinberg\VST2. So, you’d have to move the file ‘ROLI Studio Player.dll’ from there and drop it into the default plug‑in folder found at C:\Program Files\Vstplug‑ins (or whatever folder you use).

So, armed with a VST2 version of your MPE‑compatible virtual instrument, you can drag it onto a track and you’ll be able to play it with your MPE controller. There’s one more thing to do before you can access the MPE aspects and that’s to open the GUI and, at the top near the name of the instrument, click the down arrow for a menu in which you’ll find an option to Enable MPE (Screen 2). 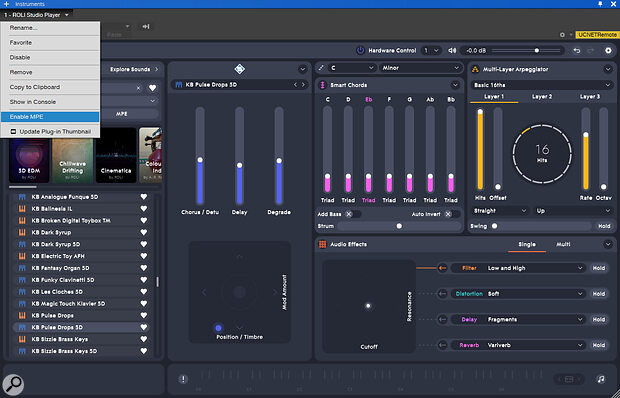 Screen 2: You must Enable MPE on the VST instrument you want to control before it will respond properly.

Now you’re ready to play. I should point out that once you’ve enabled MPE on an instrument, regular MIDI controllers will not be able to trigger its notes.

You record an MPE track just like any other track. It’s interesting to see all the expression data being written to the clip ‑ this happens with regular MIDI too when you push the modwheel or bend the pitch, of course, but with an MPE controller that sort of modulation is happening all the time through finger movements, pressure and slide (see Screen 3).

Screen 3: Once you’ve recorded a performance, you’ll see Pressure, Timbre and Pitch data displayed in the clip for each note.

The editing of the expression data is done in the Piano Roll editor. Down in the automation lanes we find a new tab called Note Controller. Here we can see and edit the data for Pressure, Pitch and Timbre for each individual note, as selected from a menu. You can select the note in the piano roll or choose the pitch from a drop‑down menu and then all the editing is applicable to just that note. You can now go to town on editing your performance or creating the expression or effect you’re after.

It’s worth remembering that Pressure and Timbre are not defined sound parameters. They are mapped to whatever controls your software or hardware instrument has specified. Commonly, pressing down (Pressure) tends to open the filter whereas sliding forwards and back (Timbre) tends to add modulation, but that’s entirely up to you and the software you’re using.

What’s great about MPE editing in Studio One is that you have the exact same tools available as you have when editing regular MIDI data. This means you have multiple paint tools that offer freehand, lines and curves, and also the square waves, triangles, saws and sine waves that you can use as LFOs (Screen 4). Adding vibrato to individual notes is what MPE is all about and that’s dead easy here. And then there’s the Transform tool which allows you to scale, twist and skew the recorded data into different shapes and forms. I did a workshop on the MIDI Editor last month, and all that information is applicable here.

Using MPE On Other Instruments

Studio One gives you the ability to enable MPE on any third‑party VST2 instrument, whether it’s compatible or not. But it won’t work if the instrument doesn’t respond to the multiple MIDI channels and data‑routing shenanigans required for MPE expression; you’ll be frustratingly pounding your squishy MPE controller wondering why you’re not getting any sound out now that you’ve enabled MPE. Native Instruments Kontakt is a good example because it does have some libraries that are MPE compatible, but as I don’t have any of that content I get no response at all.

What’s great about MPE editing in Studio One is that you have the exact same tools available as you have when editing regular MIDI data.

With a couple of other synths I tried it was a bit hit and miss. On Arturia Pigments, for example, I could get the individual pitch‑bend to work very happily, but no amount of pushing, squeezing or sliding would engage any other parameters (even though it did work when I used the standalone version, outside of Studio One). Serum, on the other hand, had a lot more options within the software to configure what you wanted your MPE controller to address, and I had no trouble running it within Studio One.

Although it could be argued that the demand for this sort of multi‑dimensional expression isn’t as widespread as MPE controller manufacturers would like us to think, MPE is a major component of MIDI 2.0 so it’s important for DAWs to get on board with it. The implementation within Studio One is functional but doesn’t feel fully fleshed out yet. The problem with VST3 plug‑ins is very likely a bug that needs to be ironed out, and I’m sure an update will be along promptly. What would really make a difference, though, would be to have MPE‑enabled versions of Mai Tai and Presence to play with, as that would connect PreSonus better to this technology and encourage them to innovate as they have in many other areas of the MIDI processing. In the mean time, MPE’s here, it works, and the editing tools available on expression data are hard to beat.