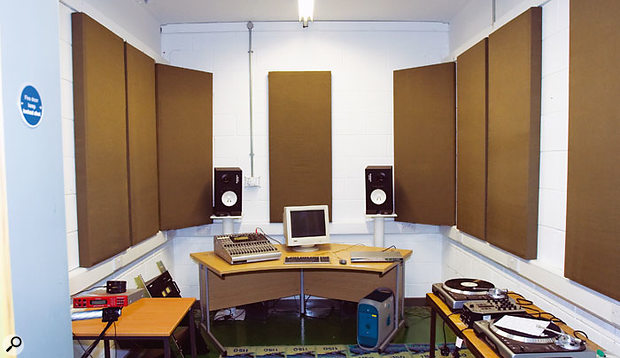 Calderdale's studio after the SOS visit. Despite the acoustic treatment being DIY and on a budget, it works well and looks good!

Calderdale College in West Yorkshire gets the Studio SOS treatment, as we turn a concrete room into a working studio.

Colleges offering music technology courses seem to share many of the same problems: they're often given totally inappropriate rooms (next door to the woodwork shop, an arc welding course or something similar); they never have nearly enough budget; and even when they do, they don't always have control over what equipment they buy — IT is often controlled by a separate department who, for whatever reason, decide they may only use Windows PCs, where the music course leader might prefer to use a system based around an Apple Mac computer.

Alex Stevenson has probably faced all these challenges to some degree. Alex is a lecturer at Calderdale College in Halifax and he called us in because his music technology department inherited a bare concrete block room around 2.5 by 4.5 metres (and about 2.7 metres high) to use as an additional teaching studio. The main studio was professionally built, but was adjacent to a woodwork shop in the next room — and nobody had thought to put in air conditioning or ventilation, so it was virtually unusable during the summer months!

The new studio room (accessed from the main classroom), was based around a rather old Mac that the music technology department were trying hard to get upgraded. They'd already set up a pair of Studiospares SN10 passive monitors in the corners, firing up the length of the room. Without any carpet or acoustic treatment, the room sounded dreadfully lively, ringy, boomy... you name it, it was there. The speakers were also standing on very wobbly, inherited stands, made from thin chipboard end-plates stuck to the cardboard tube from the centre of a roll of carpet (they had been liberated from the college's pottery department). If Blue Peter ever made speaker stands, these would be them!

During our first correspondence with Alex, it became evident that the college would need more acoustic treatment than we would usually bring along for a single project, so we decided to adopt a largely DIY approach, using low-cost materials — some of which Alex would get built before we arrived. We also took a few sheets of Auralex foam with us, as well as some spray adhesive and a pair of Auralex MoPads, which turned out to be very useful. 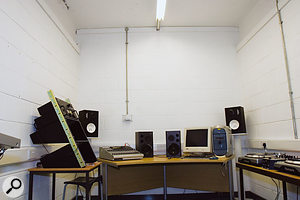 Calderdale's studio before treatment.For the main traps we settled on three-inch-deep wooden frames, with our favourite 30mm Wickes high-density Rockwool fitted flush with the front, which we would cover with acoustically transparent fabric to improve their appearance. As has been pointed out to us on occasion, this type of Rockwool is actually denser than needed for optimal high-frequency absorption, but by the same token it should also be a little more effective at lower frequencies. Whatever the mathematical reality, it has always produced good practical results for us, and it is a very cost-effective solution.

As the college is due to move buildings in a couple of years, we needed to make sure that the panels could be removed easily for use in the new location. They were held in place using simple metal brackets which we sourced from the local DIY store. Alex found some suitably coloured thin cotton material to cover them, and also ordered some fire-proofing spray so that that they could be treated to comply with the relevant safety regulations. He'd also asked the Estates department if we could borrow a small ladder to use when fixing the panels, but this request had been declined, on the basis that none of us had a certificate showing we were suitably qualified to use one! This being the case, I opted to use a rickety table instead, in a kind of self-certificated mode!

When we arrived, Alex had thoughtfully ordered up tea and chocolate Hob Nobs, and went on to explain that he had made up 10 frames to our specification, and that he could get on with stapling the cotton sheeting to the as-yet-unfinished panels while we started fitting the ones he had completed. He also explained that he wanted to be able to use some area within the room for recording vocals. 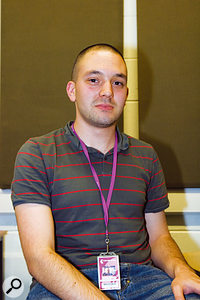 "Hi Paul and Hugh. We just wanted to say a big thank you for all your help with the studio (we can actually call it that, now we have recording equipment in there and not just a dodgy DVD player!). Initially, the studio area you worked on was a storage space, which we decided to convert into a digital audio and MIDI recording area. It was very lively, in terms of reflections and reverberations, and needed some serious acoustic attention, so we decided to contact SOS to see if you could save the day!

"It's all up and runnning now: it's a great, workable studio area and is providing surprisingly good results. We opted for Pro Tools in the end, and are thinking of investing in a 003 interface so that we can use it with the digital outputs from the Behringer desk.

"The students are enjoying working in there, and have started to create some wonderful tracks. A big thanks to SOS from all staff and students at Calderdale College for enabling us to convert this room."

Our first thought was that we should get the speakers away from the corners of the room, as corner mounting invariably results in large peaks and troughs in bass response due to the nearby proximity of solid, reflective surfaces. This necessitated moving the desk a little way from the wall and bringing the monitors in towards the centre.

One we'd established a suitable monitor position, we could then work out the best place to hang our absorber panels. A section of power trunking running around the room provided a suitable support for the bottom of the panels, which had been constructed such that their top edge would sit just beneath a wooden section running right around the room. This would allow us to screw brackets to the wood and so avoid too much masonry drilling. 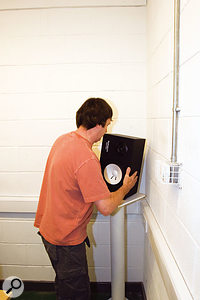 One of the first jobs was to move the speakers away from the corners of the room and do something about the ineffective speaker stands.We started by fitting panels diagonally across the two front corners of the room, as these would provide some low-end absorption, as well as attenuating reflections at higher frequencies. A single vertical panel was then placed in the centre of the front wall. Flutter echoes and unwanted first reflections from the speakers were dealt with by hanging a pair of panels each side of — and just in front of — the mixing position. A further pair were fixed to the side walls further back in the room, and the remaining panel was fixed to the rear wall, next to the entrance door — which is where we planned to set up the vocal recording area. Two sheets of Auralex two-inch foam were used to fill in this area, in order to reduce mid- and high-frequency wall reflections, with a further sheet on the wall opposite and one fixed to the back of the entrance door. The rear corner was chosen as the vocal area, as this put it furthest from the computer at the front of the room.

Because the room construction was all concrete, low-frequency boundary effects were very noticeable, both when listening and when performing close to the walls — even in our extensively-treated vocal corner, because our absorbers would have very little effect at low frequencies — so we suggested that Alex fix a curtain pole diagonally across the corner and hang a heavy duvet from it. This would not only provide extra absorption behind the singer but would also prevent them from backing too far into the corner. An SE Electronics Reflexion Filter (or similar device) placed behind the mic would clean up the sound further, which would make it possible to record reasonably dry vocals in what had until recently been a horrifically 'ringy' room.

Having fixed all the panels and foam in place, we took a closer look at the speaker stands, which were desperately flimsy. We suggested that Alex fill the cardboard tubes with cat litter to add mass and damping, but in the meantime we fixed three blobs of Blu Tak to each base, so they'd at least stand steadily on the concrete floor. We also put the Auralex MoPads beneath the speakers, which supported them more solidly, and also enabled us to angle the tweeters towards the engineer's head in both the vertical and the horizontal planes.

Out came Hugh's familiar BBC test disc and we did some listening tests to see how our treatment had improved the room. Though the space was still short of optimal, the sound was now reasonably dry and there was no obvious ringing. There was also much better stereo imaging, and a bass end that seemed better behaved than it had any right to be. Alex and his students commented that the treatment had made a much bigger difference than they'd expected — and that they were now looking forward to doing some recording in the room. They'd probably opt to use Cubase or Pro Tools running on a PC, given that his attempts to get an up-to-date Mac had so far been thwarted by the IT department.

Though time had run out, we still felt that there were improvements to make in the room. Our parting recomendation was that two box sections hiding the wiring (and possibly also hiding RSJs), running the length of the room a couple of feet below the ceiling, could be used to support a couple of wooden cross-bearers, to which could be fixed a couple of Rockwool or foam panels that would catch ceiling reflections from above the mixing position. Alex agreed that this would be a good idea, and he promised to investigate it as soon as possible.