Side-chain inputs on software processors can open up a whole new world of control possibilities - and now Sonar 7's plug-ins have this facility. Here are some ways of using it in your music. 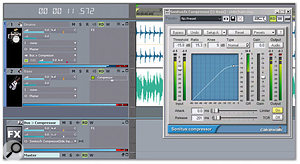 This basic side-chain setup uses the drums to compress the bass part, so that the bass is reduced in level when the drums hit. Track 1 contains drums, while Track 2 contains bass and has a Sonitus Compressor inserted. The key element here is the bus, called Bus / Compressor, whose output goes to the compressor's side-chain input. The drum track has a send that feeds this bus, allowing the drum signal to control the side-chain input. Both audio tracks also feed the master out, so they can be heard in the stereo output bus.Sonar 7 now adds side-chain capabilities to selected plug-ins. This facilitates basic techniques such as de-essing and ducking, but also opens up some more interesting creative possibilities. Whether you need rhythmic chopping for dance mixes or want to recreate that pumping drum sound that's become so fashionable for electronica, side-chaining is the answer.

Side-chaining is a term that originates in the heyday of analogue, when effects processors would include a side-chain jack (or jacks) to access particular portions of the signal path. The classic example is the side-chain input on a compressor. Normally, the amount of compression depends on a detector monitoring the input signal: the detector triggers gain reduction when that input goes over a certain threshold. A side-chain jack provides an external connection to the detector so that it can accept any signal, rather than exclusively the main input signal.

A common use for this is de-essing, which you accomplish by splitting a vocal into two paths. One goes directly to the compressor input, while the other goes through an EQ to the side-chain input. If you boost the EQ's treble, the higher frequencies from the EQ'ed signal will exceed the compressor's threshold more readily than lower-frequency ones. The result is that gain reduction is triggered by high-frequency events such as sibilants. Of course, there are plenty of ways to use the side-chain input for special effects too, which we'll get into shortly as we deal with Sonar 7's side-chain implementation.

Some devices, such as noise gates, also have 'key' inputs (which are sometimes also called side-chain inputs). Like compressors, noise gates have a detector that monitors the input signal in order to decide whether to open the gate for high-level signals, or close it to mute low-level signals such as hiss. A key or side-chain input provides access to the gate's detector, allowing you to gate one signal with a different signal altogether.

So, to sum up what we've covered thus far, a side-chain effect is an effect with a standard audio input, but it also has a second input that allows a signal other than the one at the main audio input to control some aspect of the effect's sound.

Sonar 7 includes three modified versions of previously available effects that now offer side-chain inputs: Sonitus Gate, Sonitus Compressor and Vintage Channel VC64. As soon as you insert one of these effects into a track's effects bin, the side-chain input becomes available as an output destination for any track or bus. However, as a track (or bus) output can have only one destination, if you send it to a side-chain input it will no longer be available for monitoring over a master audio bus. In some cases, this is actually beneficial: you can create an audio track that's designed specifically to drive the side-chain input, but you don't have to hear it.

It's likely, though, that you will want to hear the track providing the side-chain input, and this where buses come into play. For an example of how to set up this kind of side-chain, imagine you have a drum part and a bass part, and peaks of the bass part tend to 'step on' the drums. So you do the obvious and insert a compressor in the bass track's effects bin to tame the peaks. But then you find that while you've solved one problem, you've introduced another: now the bass part lacks dynamics, and sounds flat compared to the original.

This problem is an excellent candidate for a side-chaining solution in which you use the drums to compress the bass. That way, if a drum hit exceeds the compressor's threshold, the bass is compressed to get out of the drum's way. But if the drums stay below the threshold, the bass part retains its original dynamics.

As you get into side-chaining, you can use this setup to evaluate side-chaining's effect on the sound. If you set the Bus / Compressor bus output to 'None' instead of 'Sonitus:fx Compressor (Side Input) — Bass', the bass will be compressed conventionally (ie. the detector will listen to the bass rather than the drums). To really hear the difference between this and using the side-chain signal for compression, bounce the two tracks to a track with side-chain active and a second track with side-chain inactive, then reverse the phase on one of the tracks so you can hear any differences more clearly. In this particular example, you should hear lots of peaky bass notes: this is how much louder the bass peaks sound on the track where the compression is controlled by the drums.

Side-chaining is a key component in a popular dance/electronica effect that adds heavy pumping to drum parts, but is different to the effect achieved by simply using tons of conventional compression with a really high ratio. Here the setup is a little more complex, so let's set it up step by step: 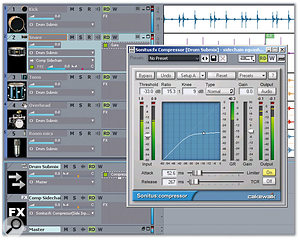 2. Send the Drum Submix output to your main stereo out bus.

4. Set the compressor for really heavy compression — say, a threshold below -20 and a ratio higher than 10:1.

5. Create a bus and assign its output to the Sonitus Compressor's side-chain input.

6. Assign the snare (or kick, if you prefer) to the bus feeding the side-chain input.

7. Start with the compression attack time set to 0ms. The drum sound will pretty much disappear when the snare hits because the gain is being reduced so much. Gradually increase the attack time to let through more of the initial snare hit, and add a fair amount of release (250-500 ms) to increase the apparent amount of pumping.

Frequency-selective or frequency-conscious compression is most often associated with de-essing, but it can provide an effect even more dramatic than the one explained above if you're working with a full, mixed drum part. Note, though, that you can't use a bus to send a track to a side-chain input on that same track, because Sonar prevents you from setting up a bus that could feed back. So here's another way to accomplish what we want; this time we'll 'key' off the kick. 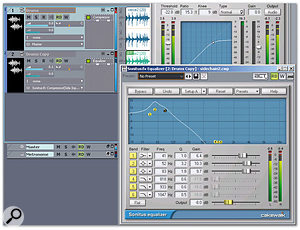 The equaliser is set to tune in the kick drum, and tune out everything else. This signal controls the compressor side-chain input. 1. Clone the track with the drum part, so that you have two tracks playing the same part.

2. Insert a Sonitus Compressor on the main drum track.

3. Insert an equaliser on the second drum track.

4. Temporarily solo the second drum track and set its output to the master bus so you can hear it.

5. Tweak the EQ to tune out everything but the kick drum. Once that's set, change the track output to 'Sonitus:fx Compressor (Side Input) — Bass' and turn off solo mode.

Being able to monitor the side-chain signal is very important when you're doing frequency-selective compression. With hardware units, there's usually a monitor button of some kind; with Sonar, you just change the bus assignment.

Yet another use for side-chain-triggered gating is enhancing drum sounds. One popular technique is to create a white noise track and insert an EQ in the track to shape the noise's tone as desired. Follow the EQ with the Sonitus Gate, and use the snare drum track as a side-chain trigger. This gives a sort of '80s snare sound. And for a huge 'hum drum' sound, create a track with a steady sine wave (60-100Hz or so). Insert a Sonitus Gate in its effects bin and trigger it with the kick drum.

Things get even more interesting when you trigger effects on one drum from a different drum. Here's one of my favourites when I have snare and kick on separate tracks:

Now the kick drum will gate the snare's reverb, producing twistedly rhythmic effects. If this messes with the snare part too much, you can always add another bus for the reverb/gate combination and dump it into the main stereo out. This would let you mix the dry track and the reverbed/gated one for the desired balance.

The Sonitus Gate's side-chain capabilities allow interesting chopping and rhythmic effects. For example, suppose you'd like to make a sustained pad more rhythmic: just insert the Sonitus Gate into the pad track's effects bin, send the drum track to a bus, then assign the bus output to 'Sonitus:Gate (Side Input)'. One particularly useful feature of the gate is that you can change the attack and release times to make the chopped sound more percussive or more flowing.

Once you've 'percussified' a sound, try putting a delay plug-in after the gate to give it even more motion. Dotted values (such as dotted half-notes) work well.

The VC64 channel strip also has a side-chain input, and its two compressors, as well as its EQs, can be set to listen to the side-chain signal. The instrument routings that use compression work like the examples we gave for Sonitus Compressor, and are useful for the same types of effects. However, with VC64, you can double the effect. For example, in the pumping example I gave above, you could use a VC64 patch with two series compressors (like its Instrument Setup) and make the effect even more radical by keying both of them to the side-chain.

Using the side-chain with EQ is a different matter, as the results depend on which EQ you have set to key, and the routing. The following isn't mentioned anywhere that I could find in the documentation, but here's how it works. 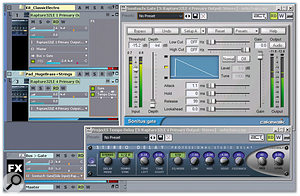 An electro-type drum part triggers the gate via the Bus / Gate bus, and the gate chops a Rapture LE pad sound (the MIDI tracks driving the instruments are hidden for clarity). Project5's Tempo Delay is adding sync'ed delay to the chopped sound.

Side-chaining is now offered in many hosts, and it's certainly encouraging to see a function that used to be pretty much a hardware-only thing making its way into the software mainstream, because it opens up new DAW options we didn't have before. The Sonar implementation seems pretty rock-solid too!