Is there any reason not to combine, say, an M/S stereo mic pair with an additional spaced mic pair when recording things like acoustic guitar? I've tried it and thought it sounded pretty sweet. I'm pretty sure other people use this method on acoustic guitar, even if it's not strictly by the rule book, but am I at risk of confusing the stereo image? 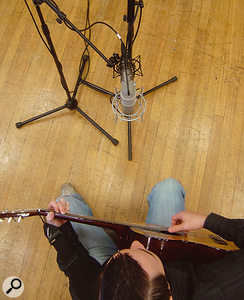 There's no reason why you can't use a spaced pair of mics alongside a coincident pair, such as the Mid/Side arrangement shown here. But when recording a single instrument it can have little effect, unless you are specifically trying to capture a lot of ambience from a reverberant room. Using the Mid/Side approach has advantages over a crossed pair, as you can get a full, on-axis sound from the centre mic, with the sides of the figure-of-eight adding some 'space' to the sound. SOS contributor Mike Senior replies: The bottom line with this is that your ears should be the guide. As far as stereo imaging is concerned, I'm not sure there's enough width in an acoustic guitar to give away what you're doing unless you get really close with the microphones, and I find that extreme close-mic positions often don't work very well with acoustic guitar.

I certainly don't think you're transgressing against any real rules. For example, the well-known Decca Tree method is quite similar to what you describe, with the exception that you're using an M/S array rather than a single omni mic in the centre. In fact, I understand that the original Decca engineers also experimented with replacing their central mic with a coincident stereo pair, and I can think of a good reason for doing so: although the straight Decca Tree makes a lovely spacious sound with good mono compatibility, its stereo imaging isn't as sharp as you'll get from a coincident pair. Putting a coincident pair at the centre of a Decca Tree adds sharper stereo imaging without impacting mono compatibility.

Your choice of an M&S rig for this purpose has a number of potential advantages over a crossed pair. With a single instrument, a crossed-pair setup is likely to have the instrument off-axis to both mics, and this will compromise the frequency response at the centre of your stereo image, especially if you're using budget mics. With an M&S setup, you can take advantage of the clearer on-axis response of your Middle mic. Another potential advantage of using M&S is that you can experiment with using an omni polar pattern for the middle mic, which will give you a better low-end response and more resistance to proximity effect if you're close-miking. Summing to mono in this case would leave you with the same situation as with a traditional three-mic Decca Tree, because the Sides signal from the figure-of-eight mic completely cancels itself out.