The need for speed continues with the release of Intel's new optical cable technology, hot on the heels of Superspeed USB 3... 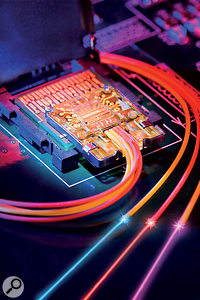 With a bandwidth of 10Gb/s, Intel's Light Peak technology aims to supersede a clutch of existing I/O formats while banishing ground-loop problems for ever.

This month, we offer various glimpses into the future for the PC musician. Superspeed USB 3 may be just arriving on a PC near you, but it's already about to be superseded in the battle of the I/O formats. Intel (http://techresearch.intel.com) are hoping to ship components for their latest Light Peak optical cable technology sometime in 2010, and with bandwidths starting at 10Gb/s (enabling a Blu‑Ray movie to be transferred in less than 30 seconds), and the potential of 100Gb/s capability within 10 years, this is getting a lot of people excited.

Intended as a universal replacement for PCI Express, SATA, SCSI, USB and Firewire, Light Peak consists of an Intel controller chip and an optical module that performs all the electricity to light conversions. Cables can be up to 100 metres long and, of course, the optical design removes any possibility of ground loops (hooray!).

In another glimpse into the future, Magnus and Fredrik Lidström of Sonic Charge (www.soniccharge.com) have launched the µTonic Patternarium, an extremely inventive and fun way for anyone to influence their future products on‑line. Like the Synplant (reviewed in SOS June 2009), the µTonic VST/AU plug‑in takes a genetic approach to sound creation, rendering its synthetic percussion sounds and patterns in real time, using no samples or prepared waveforms. 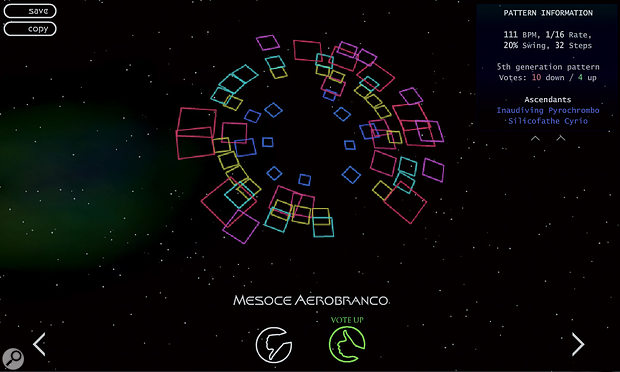 Want to influence the future of drum patterns? Try the Sonic Charge Patternarium.

While µTonic itself has been available for some time, the Patternarium is a masterful marketing ploy. Described as an 'online collaborative patch randomizer', it continuously generates new sounds and rhythms for µTonic through principles of evolution. Basically, the Sonic Charge servers regularly generate 1000 new µTonic patterns at a time, each one being the cross-product of two other patterns, picked at random, along with its own randomly generated name. Existing µTonic users can download any pattern that appeals to them, and even copy and paste it directly from the browser to the synth.

However, whether or not you own µTonic, you can audition as many patterns as you like using the animated lightshow of Patternarium and give each a 'thumbs up' or 'thumbs down'. Those that receive the highest number of votes will prosper and procreate in the next generation. With 100,000 hits and five generations of patterns generated in the first four days, who knows where these sounds are heading?

Anyone can participate and influence the outcome of Patternarium simply by voting. You could call it 'Musical Darwinism' and, with a new version of µTonic in the offing, you can bet that Magnus is analysing the development of these patterns with great interest. Patterns might grow ever more complex, degenerate into noise, or evolve into the ultimate groove.

Windows 7 SP1: Microsoft are expected to release a public beta version of their first service pack for Windows 7 by the time you read this at the end of July. No new features are expected, and the pack will feature various updates and hotfixes. Apparently, 100 million licenses for Windows 7 have been sold since its release.

Record PC Market Growth: Analyst firm iSuppli claim that PC shipments grew more in the first quarter of 2010 than in any previous quarter since their records began in 2003. Unfortunately, this record growth is largely due to 2009 sales being so weak, as a result of the economic downturn, although it's encouraging that figures are once again on the up.

Sharp Video Wall: Many musicians use multi‑screen displays for sequencer, mixing and editing duties, but the thickness of most monitor bezels always results in a 'multi‑pane' feel. However, Sharp have now launched a 60‑inch screen with a bezel width of just 2.4mm, so you can assemble video walls with minimal discontinuities.

WhoCrashed: Many spontaneous PC reboots are, apparently, caused by malfunctioning device drivers or 'kernel modules'. However, although Windows saves information about such crashes, it's generally rather incomprehensible. Enter the WhoCrashed utility from Resplendence (www.resplendence.com), which analyses the data and suggests the most likely code module and product at fault. It's not infallible, but the Home Edition is free, while the Professional Edition provides more detailed analysis, and also lets you analyse remote computers on a network for just 29.95 Euros.