We get our heads round one of Reason's new sample‑based Rack Extensions, A‑List Acoustic Guitarist.

One of the enhancements in Reason 7.1, when it was announced a few months ago, was support for 'scriptable instrument' Rack Extensions. That exciting development seemed to suggest that, as well as the synths, effect and CV gizmos that we've all come to associate with the RE format, self‑contained sample‑based instruments would become available too.

It came as no surprise at all, then, that Propellerhead quickly released one such RE — the €79$99 A‑List Acoustic Guitarist — which both proves the worth of the new technology and marks a new era in the Reason world. It looks as if most 'premium' sampled instruments will now be supplied in this Rack Extension form, rather than as ReFills for the trusty but ageing NNXT. It's going to be very interesting to see if it tempts any new developers to the Reason platform. Or if Propellerhead have more instruments up their sleeve (maybe an A‑List Electric Guitarist, for one thing). But in the meantime let's look at what we currently have to play with.

Acoustic Guitarist appears in your rack as a medium-sized device, and creates a MIDI track for itself in the sequencer. It's driven by MIDI, and ideally from a four- or five-octave MIDI controller keyboard, as we'll see. Then the general idea is that you don't so much play it as direct it: MIDI notes C4 and above select the chord, while the three octaves below (notes C1 through to B3) choose preset strumming 'phrases'. It's clearly set up for two-handed operation; chords with your right hand and single‑finger prods with your left, either side of that notional keyboard split point. Try it for a moment and it doesn't take long to get the hang of it.

Acoustic Guitarist is a fabulously easy way for keyboard players to generate good-sounding strummed guitar tracks, though it's not quite as sophisticated as some users had hoped for.Digging into the detail a bit, let's start with the guitar sound, as that's quite straightforward. There's just one basic timbre, but you can vary it with the Character knob (from Warm to Crisp), the Type switch (Mic or Pickup tone) and the Attack knob (Soft to Punchy). Engaging the Doubling switch makes it sound like you've double-tracked your guitar part and panned the two channels hard left and right — great for a big, luxurious effect.

The heart of this RE, though, is the Performance section, and the key concept here is Style. The 26 descriptively named styles (and their half‑speed 'Slow' counterparts) in the Style menu cover a lot of musical ground, and each of them has 11 unique phrases, which you choose with MIDI notes C3 to A#3. All other phrases, triggered by keys in the two octaves below, are the same across all styles. These 'Standard' phrases start with single spreads, at different speeds, up and down, before going on to quarter-, eighth- and 16th-note patterns, some with mutes thrown in. Standard 19 and 20 are worth remembering; they're some of the few that aren't fully voiced, but only play a couple of lower strings, and are useful for more subtle work in song intros and so on. Arguably even more essential to know about are keys C1 and B3 at the extremities of the style-selection pitch range. They trigger, respectively, a silent phrase, and a phrase stop. The outcome in both cases is similar — any phrase that was previously playing is silenced — but there is a subtle difference between them. Triggering the Silent phrase is good for inserting rests into other phrases; when you trigger them again they immediately resume at an appropriate place in the pattern. Stop, on the other hand, is more final; you need to choose both another normal phrase and re‑trigger a chord to start chords sounding again.

When it comes to actually defining chords, you've a few ways to work. For the simplest operation of all, assuming you know the key your song is in, choose that key in the Performance section pop‑up menu. Then chords can be chosen (using MIDI notes C4 and above) using just one finger. Acoustic Guitarist places all the most useful major, minor, suspended and seventh chords on the 12 keys in each octave. Regard these as a kind of chord 'menu' and you can hardly go wrong;

While essentially a preset device, Propellerhead's new RE does at least offer a wide range of musical styles.you don't have to know any music theory, and any note will give you something useful.

If you prefer to actually play chord shapes though — which gives you a wider scope of chord types — leave the Key setting on '‑'. Then, any vaguely appropriate chord shapes, from one to four notes, will trigger major, minor, 7, min7, maj7 and sus4 chord types. Even more varieties can be added if you flip Acoustic Guitarist around and move its rear-panel switch from Default to Full. This adds diminished, augmented and several other types (which are helpfully listed on the panel). Interestingly, though, the Full chord set uses up more RAM; approximately 440MB compared to the default 210MB.

When you've mastered the basic principles in Acoustic Guitarist, several other niceties can come into play. Here's a quick list of tips:

So that's about it — a ridiculously easy-to-use virtual instrument that can fill your tracks with guitar grooves of that we keyboard‑only types can merely dream of.

Despite the obvious benefits, sampled instrument Rack Extensions bring a potential problem: data storage demands. A‑List Acoustic Guitarist is, for example, a 1.2GB download that installs to 1.35GB on my Mac. And even now, if you own most of the available REs (most of which aren't sample‑based, of course), they'll occupy more than 5GB on your disk. 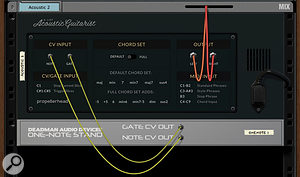 CV signals from any source elsewhere in your rack can trigger the individual sampled elements that make up Acoustic Guitarist's sequenced phrases.OK, so 5GB isn't much in the grand scheme of things, but it could already be a deal‑breaker for those using small-sized solid‑state system drives. But reflect on the fact that many top‑end sampled pianos and orchestral libraries can run to tens of gigabytes each, and imagine owning a few of those; suddenly this could be more of a general problem.

The solution is easy in principle: Propellerhead need to offer us a way to store some REs on external drives in the future. I wouldn't be at all surprised to see this, and some more general improvement in RE management, sorting and selection, in a future Reason update.

While Acoustic Guitarist is a nice development in the Reason world, it's a bit disappointing that it doesn't utilise Reason's heralded scripting support to provide variable chord voicing (ie. using the same notes, but in different octaves and orders), or to simulate the sounds of chord changes (string squeaks and subtle momentary damping). It would have been great to have been able to trigger individual strings for arpeggiated patterns and also let users design their own. Nor is it ideally suited to those with small controller keyboards (like the ubiquitous two-octave portable models that are so handy to have around). 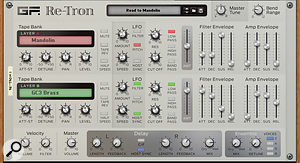 There's a way for committed Reason tweakers to address at least one of these shortcomings, though. You can access the repertoire of individual strums and other sounds manually, as it were, by sending CV signals to the rear-panel CV inputs. An RE like Deadman Audio Devices' One‑Note Stand easily generates that in real time, from a MIDI input (notes C1 to C#5 are what you'll need to play). You'll probably also have to put Acoustic Guitarist in Latch mode, with a chord already defined (or sequenced), but then the CV input effectively lets you generate your own patterns.

First To The Party

Before we all start frothing at the mouth over A‑List Acoustic Guitarist, it's worth remembering that there has actually been a substantial sample‑based instrument available as an RE for quite some time: GForce Software's Re‑Tron virtual Mellotron. Not much more than half a gigabyte in size, and arguably representing the polar opposite of sampling technology, Re‑Tron nevertheless showed the way in principle, and right from the earliest days of the RE platform. Not only for Beatles and Led Zeppelin tributes, M‑Tron is a surprisingly flexible and useful instrument that can find uses in many musical genres.