Last year Reaper enjoyed a fairly important overhaul which included Stretch Markers for correcting rhythmic inaccuracies (see http://sosm.ag/0813-reaper for more details on this), as well as a long list of bug fixes. This spring, the software was spruced up once more, with a range of improvements offered in version 4.6.02, and then built upon in 4.6.1 (which was the most recent version at the time of writing). In this month's column, I'll take a look at changes made to the plug-in bundle, and well as some global improvements.

The first few things of note when browsing through the latest feature set are not immediately exciting, but they're still pretty useful. In Mac OS, a number of tweaks have been made to the way in which projects with lots of MIDI items are handled, mainly in respect to opening and closing files. Loading, saving and launching the project itself are all made quicker and more reliable and this will come as a blessing to those using Reaper with lots of software instrument parts. Another neat feature on both Mac and Windows platforms allows for the automatic, incremental saving of projects. As with more general data backup procedures, saving incrementally allows the user to move back in time to previous incarnations of the project, 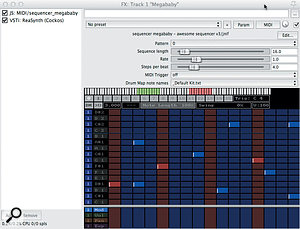 The Megababy plug-in window. Since it's a MIDI plug-in, it's placed before the software instrument (in this case, ReaSynth) in the effects chain. and mix and match between material from the various versions if required. To turn this function on, simply navigate to the File menu and click 'Save new version of the project'. Each time the project is saved using this method, a unique, incrementally numbered filename is generated. It's well worth getting used to the keyboard shortcut — which adds one further modifier key to the standard 'Save as' keyboard combination — for this useful feature.

Those who enjoy using step sequencers to create bass, synth and drums patterns should like the brightly coloured Megababy plug-in. The sequencer is new to the MIDI category within the Jesusonic (JS) collection and has been modified from a more primitive release of a similar plug-in. The first screenshot shows an instance of Megababy inserted in an effects chain, triggering a ReaSynth synthesizer plug-in. I've had some interesting results experimenting with this, since I'm able to get started quickly by clicking notes onto the grid. Let's take a look at the most important features, starting with the parameters at the top of the plug-in window:

Lower down on the plug-in interface, immediately above the grid, there are further crucial controls. By dragging the green bar over the graphic of a keyboard, you can change the octave range shown on the step-sequencer grid. Meanwhile, the buttons labelled 0 to 15 provide another method of switching between patterns. The Note Length 'fader' can be used to constrict note length — this is perfect for creating really choppy bass lines — and next to this a swing quantise can also be added. Oddly, the Swing parameter defaults to a value of 100 percent (the heaviest swing setting) but, thankfully, the control takes effect once the value is changed for the first time.

At the very bottom of the window there are 'lanes' provided to automate continuous controllers including modulation, main volume and pan. The feature allows for the musical shaping of patterns, increasing variation and interest when triggering more fully functional software instruments. However, simpler plug-ins, such as ReaSynth, don't necessarily respond to these controller messages, so I'd advise a quick test before you spend much time drawing node points for each controller lane.

Since reviewing the basic features of the ReaSamplOmatic 5000 sampler in last December's issue (see http://sosm.ag/dec13-reaper), the plug-in has been improved to overcome a couple of major shortcomings highlighted in the article. Rather than being limited to a single sample per instance of the plug-in, users can now press the 'list' button on the right-hand side of the plug-in interface to import multiple samples. The third screen shows the list view, which includes buttons for adding, deleting and sorting the various audio files. Once samples have been imported for use in the plug-in, they're also rendered to a dedicated 'samples' folder when the project is saved (assuming that the 'Copy all media into project directory' option has been ticked in the save dialogue box). On the main plug-in interface, the user can switch between samples in the drop-down menu at the top, and set different key zones and velocity ranges for each. 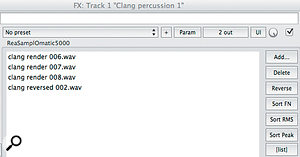 The new list view for the ReaSamplOmatic 5000 plug-in, which allows multiple audio files to be loaded into the sampler simultaneously.

A second key enhancement is the addition of a graphical ADR (attack, decay, release) envelope on the sample waveform display. The points of the envelope can be freely dragged into position, giving a visual representation of the amplitude envelope over time and not just relying upon the interpretation of numeric values for these parameters, as was the case before.

These two improvements enhance ReaSamplOmatic no end. They avoid the need to pre-process samples or use multiple instances of the plug-in, both of which could prove frustratingly time-consuming in previous versions. Multi-sampling and velocity layering have become far more viable in this release, so I must applaud the developers for their actions in this respect! 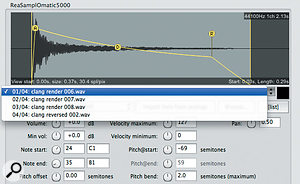 The new graphical ADR function of the ReaSamplOmatic 5000. The drop-down menu below the graphical display is used for switching between the samples so that they may be edited individually.Just by looking at two of the stock plug-ins, it's clear that the most recent updates to Reaper have included some helpful improvements designed with creativity and the user experience in mind. If you haven't yet checked out the Megababy and the ReaSamplOmatic 5000, perhaps now might be a good time to jump on board — they are both great fun to work with!