In this month's Logic workshop we will be looking at using some of Logic's tempo-sync'ed effects, starting initially with some of the simple insert plug-ins and then moving through to using Ultrabeat as a step-sequenced multi-effects processor.

The first thing to do is to create a software instrument track with a pad sound and an accompanying MIDI region. We will be using this pad sound for all the examples in this article. The first process we will consider is how to achieve a simple eighth-note auto-panning effect.

The left-hand portion of the Rate control allows you to set the musical division at which you want the auto panning to occur. If you click the disclosure arrow at the bottom of the plug-in, you can use the Offset slider to adjust the timing of the auto-panning relative to the sequencer clock. Try the setting displayed in picture 1 for an eighth-note auto-panning effect. 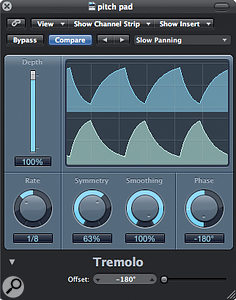 Logic's Autofilter plug-in is another great plug-in for tempo-sync'ed sound design. Call up an instance of Logic's Autofilter across your pre-programmed pad sound. The Autofilter plug-in is divided into three control sections: the Envelope section in the top row, the LFO section below it and the Filter section to the right. As an audio signal flows into the Autofilter plug-in, it analyses the amplitude of the incoming audio signal and generates a trigger signal that can be used for controlling the filter cutoff. This trigger generates an ADSR envelope to shape how the filter reacts to the incoming signal. The controls in the bottom half of the plug-in, under the title LFO, are for the tempo-sync'able LFO, which can be used to modulate the cutoff of the filter. It is these controls, and those for the Filter section, that we will focus on.

The Autofilter plug-in contains a multi-mode filter that allows you to choose from four different low-pass filters, a high-pass filter, and a band-pass filter.

Logic's most flexible tempo-sync'ed filtering can be found in Logic's Ultrabeat drum machine plug-in. Ultrabeat's side-chain input allows you to route audio through its filter and effects section. Different filter and effects settings can be stored in each drum cell and their parameters can then be automated using Ultrabeat's internal step sequencer, but first we need to set up our synth pad from the previous example as a side-chain source. To do this, route the output of the synth to bus 1 and then go to the auxiliary track that Logic has created and set its output to nothing. When you play the pad part you should be able to see the audio from your Pad track going into bus 1, but you won't hear it. Now to use Ultrabeat's internal step sequencer:

Now you have heard some of the musical potential of Ultrabeat as an effects processor, let's take a closer look at its controls. To do this we need to initialise one of Ultrabeat's drum pads to its default setting. Still using the 'Side Chain Gate' preset, Ctrl-click on the lowest key of the virtual keyboard in Ultrabeat and, from the menu, choose Init, then Sine. Now go to the Osc 1 section and click the 'side chain' button so that it's illuminated (see picture 3, label 1).

In its default setting, Logic routes the side-chain signal through the filter section set to a low-pass filter. The filter section is in the centre of Ultrabeat (see picture 3, label 2) and has controls for the filter cutoff and resonance. Ultrabeat's filter is a multi-mode filter and you have the choice of low-pass (LP), high-pass (HP), band-pass (BP) and band-reject (BR) filters. Experiment with the different types.

Ultrabeat also has a distortion section (picture 3, label 3) directly below the filter section, which can be really useful for adding some grit to your filter effects. Click on the Crush or Distort buttons to turn on one of the types, and then adjust the effect to taste using the three controls above it. Ultrabeat also has a powerful EQ section (see picture 3, label 4) with which to further mangle your incoming audio. Experiment with setting up a bunch of drum pads with radically different filter, distortion and EQ settings and triggering them across your pad sound.

One of the most fun things to do when using Ultrabeat is to adjust the settings of Envelope 4 (picture 3, label 5) to create different gate effects. Envelope 4 controls the amplitude of each note, and adjusting its decay time to very short values results in a very abrupt gating effect, whereas long decay and attack times can be great for subtle pulse effects. Program a few keys in Ultrabeat with dramatically different settings for Envelope 4 and then experiment by triggering them in different patterns, using your keyboard to create complex gate effects. 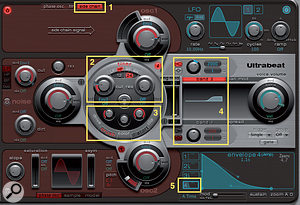 3: These five sections of Ultrabeat are the keys to using it as a powerful effects processor.

Once you have created some drum pads with different settings you can then input different patterns into Ultrabeat and trigger them from the bottom octaves of your keyboard. With your customised version of the 'Side Chain Gate' preset loaded, go to the bottom right-hand corner of the Ultrabeat window and click the Full View button to display its in-built step sequencer. Within the Ultrabeat plug-in you can store and trigger up to 24 patterns. To enter a new one:

Remember you can record your performance into the Ultrabeat track and then edit that MIDI region to tighten up any triggering errors.