You may be surprised at the data-transfer capabilities of your USB ports. Here's how to find out what you're dealing with...

Most of us have a batch of USB ports on our desktop or laptop PCs, but how do we know whether these ports support the USB Full‑speed option (12Mbit/s, aka USB 1.1), the faster High‑speed option (480Mbit/s, aka USB 2), or even 'SuperSpeed USB' (4.8Gbit/s, aka USB 3) transfer rates? The SOS forums often include queries of this nature, so here are some helpful tips for correct identification.

First of all, the three different formats are, fortunately, backwards compatible, so (for instance) you can plug a Full‑speed or High‑speed USB device into a SuperSpeed USB port, although it won't run any faster. The important thing to find out, then, is the maximum speed available from your ports.

SuperSpeed USB 3 ports are still somewhat scarce, having been available for less than a year, but should be easily identifiable by their bright blue plastic 'tongue' (see above), whereas both USB 1.1 and USB 2 ports are mostly black. These are the ones that most musicians will be trying to distinguish between. 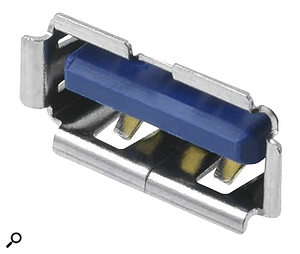 A USB 3 port is easily identified by its bright blue colour, whereas most USB 1.1 and 2 ports are black.

The first piece of advice for identifying these ports is always to look in the section labelled 'Universal Serial Bus Controllers' in the Windows Device Manager for the word 'Enhanced'. If you find this, then at least some of your ports will be capable of High‑speed performance, although perhaps not all. For peace of mind, it's more sensible to actually measure their transfer rates, which can be done quickly and easily by plugging in a suitable USB device and using a test utility such as HD Tune (www.hdtune.com). For our purposes, the free, downloadable version is perfectly adequate, although the Pro version, offering features such as file benchmarking, secure erase and cache testing, is only $34.95. Both run on Windows 2000, XP, Vista and 7. 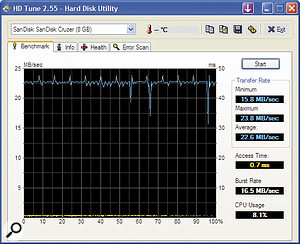 If you've got an external USB hard drive, plug that in and run the HD Tune benchmark test. Most modern internal hard drives will manage a maximum sustained transfer rate of well over 100MB/s, although USB 2 Full‑speed external versions rarely manage more than 40MB/s in real‑world tests, which is why the typical 120MB/s offered by USB 3 SuperSpeed is so enticing.

Plugging in any USB 2 flash drive will soon establish whether or not a particular USB port supports High‑speed USB: basically, any result over 1.5MB/s proves that that port has USB 2 High‑speed capability. I have an old 64MB USB stick that managed just a 0.9MB/s transfer rate and is therefore a USB 1.1 Full‑speed device (maximum transfer rate of 12Mbit/s, which converts to 1.5MByte/s). However, another generic 64MB stick sustained 8MB/s and was, therefore, a USB 2 High‑speed device (also proving that the port it was plugged into had USB 2 capability).

Intel Sandy Bridge Processors: By the time you read this in mid‑January, Intel will just have released their next generation of CPUs, featuring the latest Sandy Bridge 32nm micro‑architecture. As usual with new Intel ranges, a different motherboard will be required (featuring the new LGA‑1155 socket), but the various models will retain the familiar Core i3, i5 and i7 names. The two most significant improvements are a GPU (Graphic Processing Unit) built onto the same chip as the CPU, enabling both components to use more efficient on‑board cache memory, and a new range of AVX (Advanced Vector Extensions), aimed at improving media performance. These could both benefit the musician, and will be particularly welcome on new laptops where on‑board graphics are the norm.

Kingston USB 3 Drives: If you have a PC with USB 3 ports, Kingston's new HyperX MAX 3 range of solid‑state drives offers SuperSpeed USB transfer rates, with write speeds of up to 160MB/s and read speeds of up to 195MB/s. They're capable of transferring a 10GB file in just over a minute (compared with nearly six minutes over USB 2), so soon you won't have time to make a cup of coffee while you do your backups!

Shapeshifter: A patent has been filed by Microsoft for a new shape‑memory plastic coating that can distort when different wavelengths of ultraviolet light strike it, raising and lowering bumps on the surface to provide tactile feedback. You could design a fabulous music controller with this! Vibro‑tactile displays that provide touch feedback are already available, but have the distinct disadvantage for the musician of being noisy.

Kinect With The Music: Finally, for those who prefer to keep their controllers hands‑free, Martin Kaltenbrunner of the Interface Culture Lab at the University of Art and Industrial Design in Linz, Austria, has built a prototype theremin using Microsoft's depth‑sensing, 3D Kinect camera (originally designed to control Xbox 360 games via voice commands and hand gestures). Take a look at http://vimeo.com/17330186.