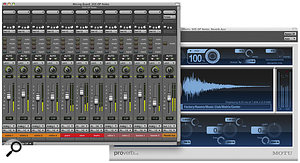 Sharing a single reverb amongst many tracks is a common way of using aux tracks. It's CPU‑efficient, keeps a mix clear and simple, and can help to create a coherent sound. It's easy to set up with an aux track, a bus pair and track sends.

For many projects, DP's basic mixing facilities will get you where you want to go. You know the routine: create your audio tracks, configure hardware inputs and outputs for them, record, slap on plug‑ins during mixdown, and Bob's your uncle. There's nothing wrong with this, but it's sometimes neither the most efficient nor the creatively smartest way to work. Many more possibilities open up when you explore the world of buses, aux tracks and sends — and we'll do that right now, starting with a classic mix technique.

Here's a little scenario. You've got 20 audio tracks, and they all need reverb in differing amounts. Surely it's just a question of instantiating a reverb plug‑in on each? Well, it's not out of the question, but it'd be a terribly cumbersome way of working. First of all, the CPU hit of 20 reverbs could be colossal — potentially crippling if your Mac is already maxed out. Second, configuring all those reverbs is very labour intensive, with way too much room for confusion.

What's needed is a way to share one reverb flexibly amongst those 20 tracks — and it's easy. We're going to set it up on an aux track, a track type that you can't record on (although it can still be automated) and whose purpose in life is as a routing tool. Next, we'll configure the specialised extra outputs on the audio tracks — their aux sends — to split off some signal from each, destined for the reverb. We'll tie the whole lot together with a bus — one of DP's invisible audio conduits. Here's how it works:

1. From Project menu / Add Track, create an aux track. Set its output to your main hardware outs (or whatever you use for monitoring), load your favourite reverb in one of its insert slots, and set the reverb's wet/dry mix control to 100 percent wet.

2. Still in the Mixing Board, make sure the Sends section is visible. There should be a tick next to 'Sends' in the mini‑menu.

3. For each of your audio tracks, click on the uppermost Send Output pop‑up and choose 'bus 1‑2', which you'll find initially in the New Stereo Bundle submenu. Then choose that same bus 1‑2 as the input for the aux track you created in step 1.

That's it. Now, to put some reverb on an audio track, you just turn up its Send Volume knob (and optionally use its Send Pan knob too, to help with proper stereo imaging). Do this for any number of audio tracks, and bus 1‑2 gathers all the sends together. Experimenting with different reverb types is so much easier now, because there's just the one plug‑in to manage. As well as being more efficient, it also opens up new creative options. For example, it allows you to place an EQ in an insert slot below the reverb to really sculpt its sound. Try doing that for a reverb instantiated on an audio track and you'd end up EQ'ing the dry signal as well. You can also try compressing or gating the reverb output, or passing it through a chorus plug‑in for a dreamy, de‑correlated sound.

A technique that comes up frequently in SOS's interviews with great producers and engineers is parallel compression. Often used to supercharge drum overheads, in essence it's all about splitting the track's signal in two, applying aggressive compression to one 'half', leaving the other alone, and blending to taste. Here's a great way to set it up in DP:

1. In the Mixing Board, locate your drum‑overhead track and click in one of its Send pop‑ups.

2. Choose New Aux Track Via New Stereo Bundle, and from the submenu choose a bus pair you know isn't being used for anything else. In one stroke, DP configures the Aux Send, creates a new Aux Track, and ties the two together via the bus pair you chose — a real time‑saver.

3. For clarity, drag the new aux track so that it's next to the original drum track in the Mixing Board, and give it a suitable name, such as 'Drums Compressed'.

4. On the aux track, instantiate your compressor or other dynamics plug‑in of choice (something 'pumpy' like MasterWorks Leveler works well). Most compressors won't have a wet/dry mix control, but if yours does, set it to 100 percent wet.

5. Now double‑click the original drum track's aux send knob to set the output to a healthy 0dB (unity), which is at approximately the 2 o'clock position. Signal now begins to flow through the aux track, and its compressor, in parallel with the dry track — hence the name of the technique.

One extra thing to think about here is whether the aux send is operating post‑fader or pre‑fader. What's the difference? Well, if it's post‑fader (which it'll be by default), as you adjust the drum track's main level fader, the send level changes too. If it's pre‑fader (which it will become if you click the send's little 'P' button), the send level is completely independent from the track's level fader. For parallel compression, I like to work pre‑fader, as then I can adjust the relative levels of the dry and compressed drums on their main faders with no fear of unpredictable level interactions as the mix takes shape.

A stem is a submix of a group of tracks, such as guitars or backing vocals. By creating multiple stems, and essentially reducing your main mix elements down to just a handful of faders, you can make a big mix much easier to deal with. Stem mixing is also essential for those who like to get their DP mixes out into the hardware domain, to a summing box, for example.

Aux tracks are just perfect for stems. Create one for each stem required, and set each of their inputs to a previously unused, independent bus pair. Let's say you chose 'bus 5‑6' for a guitar stem. Now you'd find all your individual guitar tracks and set their outputs also to bus 5‑6. Repeat the process for each stem grouping of tracks, and you're there.

If this method of working appeals, there's a nice technique you can use to make life easier still. Press Shift‑U to open the Bundles window and click on the Busses tab. Double‑click on a bus's name (which will be in the normal generic form, such as 'bus 5‑6') and you can enter a more descriptive name for it, such as 'Guitar submix'. That will now appear in all track input and output pop‑ups, and certainly makes working with multiple buses much less of a memory test!

It's counter‑intuitive, but when you've got DP's Input Monitoring Mode set to 'Monitor record‑enabled tracks through effects', you've got plug‑ins instantiated, and you can clearly hear their contribution, you're still only actually recording a dry signal to your hard disk. Conceptually speaking, your signal is passing through the plug‑ins on the way out of DP, after it has been recorded.

Mostly this is a good thing, from the point of view of flexibility. For example, it means that you can give singers some 'courtesy' reverb during tracking, safe in the knowledge that you can change it or get rid of it completely during mixing. But when you're recording guitars, guitarists generally want to 'play' the effects, interacting with them and modifying their performance to suit. It's of limited value to be able to change plug‑in settings afterwards. In these situations, you can try recording 'wet', and as this also saves you having to keep the plug‑ins instantiated for the rest of your mix, it can be CPU efficient:

1. Add an audio track to record your guitar, and record‑enable it, but set its input to be an unused bus pair.

2. Add an aux track and set its output to be the same bus pair you chose in step 1, and its input to whatever hardware input your guitar is plugged into.

3. Now add your guitar plug‑ins on the aux track rather than on the audio track. By doing this, you ensure that the effects are in the signal path on the way into DP, so they're being recorded.

Generally speaking, plug‑ins such as reverbs and delays have wet/dry mix parameters, so that they can be used flexibly when inserted on individual audio tracks. But when you 'share' a reverb using an aux track, that parameter is no longer required: the entire aux track represents the 'wet' and the individual audio tracks the 'dry'. So here's the rule: if you use a reverb or delay on an aux, set it to 100 percent wet. Then if you want to adjust the overall dry/reverb balance, simply adjust the aux track's level fader.