Sonar X1 offers a very different user interface experience to previous versions — so here's a guide to the new GUI.

No Sonar 9? That's right. Cakewalk have 're‑booted' Sonar into Sonar X1, which is very much like Sonar, yet very different, too. My first 30 minutes of exploring the new version consisted mostly of "WTF?!?” moments, yet once I started figuring out the new workflow, I soon got comfortable.

Although you get 1.2GB of new x64 REX loops and WAV one‑shots from Sample Magic and Loopmasters, don't expect new instruments (aside from the Cakewalk Sound Center, which is designed to find and load instruments fast). You also won't find radical improvements in staff view or new effects, other than the Producer Edition's superb ProChannel channel strip. X1 is really a redesign and rethink, rather than a 'new' program. But what it provides is more significant than just adding extra bells and whistles.

It's tempting to dive into specific features, but let's step back, get an overview and orient ourselves to the new interface, with an emphasis on how these changes affect routine work with Sonar.

Conceptually, X1 reconciles a single‑window interface with a multiple‑window interface through a variety of docking, undocking, collapsing, hiding and expanding options. As a result, X1 is 'display‑scalable' from credible laptop operation to multi‑monitor setups.

One of the main differences is that X1 'promotes' several standard Sonar elements into greater importance, so let's consider these first.

The Inspector: This consolidates many parameters that had been scattered around Sonar into two (and sometimes three) separate 'inspectors within inspectors'.

The net result of this workflow change is that I use the Track View less for tweaking, and more for arranging, as it's easier to make tweaks in the Inspector. The Track Properties option also eliminates a lot of right‑clicking that would otherwise be needed to open up various properties dialogues.

Control Bar: This replaces the roster of Toolbars with one consolidated, modular toolbar, where you can show or hide each module and arrange them in any order you want. For me, the jury's still out on this change; I had my Sonar 8.5 toolbar slimmed down so that it gave 90 percent of what I needed in a thin strip along the top. The Control Bar takes up more space and you can't float individual sections, only the Control Bar as a whole. However, with a dual‑monitor display, you can stretch it across the top and have just about every control option a click away. So, for my workflow at least, it has both advantages and disadvantages.

Browser: The new Browser is like the previous Media Browser on steroids and gives X1 more of a drag‑and‑drop paradigm where you can not only drag audio or MIDI effects into tracks or clips, but also drag in virtual instruments and media (track icons, track templates, effects chains, groove clips, step-sequencer patterns and REX loops, for example). This is all organised under three tabs: media, plug‑ins (with separate views for audio effects, MIDI effects, synths and Rewire devices) and a simplified synth rack. However, you can add custom folders to the media section, such as a folder that contains all your video files or a favourite sample library. There's also a search filter, so if you enter, for example, 'Guitar' and open a folder of loops, only those with 'Guitar' in their names will show up. Finally, of course, you can preview what you select. 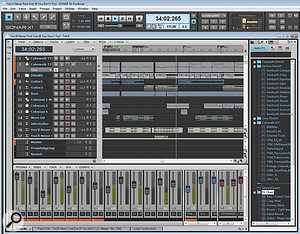 An overview of the new GUI. The Inspector is collapsed on the left; the Browser, showing audio effects, is docked on the right. The Control bar is on top. The Multidock is currently expanded to show the console, set to narrow strips and showing only faders and meters, so it serves as a virtual meter bridge. Note the other available tabbed views along the bottom of the Multidock.

It may take you a while to get used to relying on drag‑and‑drop to insert data into projects, but once the process becomes familiar you'll probably keep the browser open and use it more and more. But note that this is not a bi‑directional browser: you can't, for example, drag loops from a project into a folder (although you can still drag audio and MIDI files to the desktop).

Multidock: This is like the tabbed views of Sonar 8.5, but I find it simpler to use. The premise is that you probably won't be looking at different views at the same time (for example, if you're in the Loop Construction view, you won't care about seeing the MIDI Piano Roll view), so you can dock a bunch of views into the Multidock and select between them with the tabs.

While we're on the subject of docking, let's consider how X1 handles this feature in general. One of the best user interface additions is the ability to collapse and expand docked windows with a single click. For instance, you can have Multidock docked along the bottom and collapsed, and work mostly in Track view, the Inspector and the Browser until you feel the need to do a quick MIDI track edit. Expand the Multidock, hit the Piano Roll tab, do your edits, collapse. Ditto the mixer: bring it up when you need to tweak some track levels, then hide it. I also like setting up the mixer as a 'meter bridge' along the bottom, showing only faders and meters.

Some windows might need a larger view, so you can always undock a docked window. The classic example would be undocking the mixer and deploying it in a second monitor, but you may also want to temporarily undock the Multidocked Loop Construction view when you're doing intensive editing, so you can zoom way in on transients, and when your work is done, re‑dock it. While there's an undock option from a mini‑menu in each window, you can just drag the window out of its docked position and dock it elsewhere or float it.

So, does moving all this stuff around get complicated or inconvenient? It could, but you don't have to re‑invent the wheel, as 10 screensets are available in the Control Bar.

One of the aspects that initially confused me the most was going to the menu bar and not finding things I wanted. Some of this is due to consolidation: all global settings have been put into a Live‑like Preferences menu you access via the Edit menu. But X1 now includes mini-menus within windows. So, suppose you have the Mixer and Piano Roll views in the Multidock. When the Mixer window is displayed, you'll find drop‑down menus for Modules, Strips, Track, Bus and Options. With the Piano Roll, the menus change to Edit, View, Notes, Controllers and Tracks. Similarly, the Track View window (the only main window that can't be docked) has drop‑down menus for track‑related functions, and you can now control widgets and such directly from within the window. The bottom line: fewer mouse movements and fewer menu hunts.

When faced with X1, forget about previous Sonar versions. The key is to get familiar with the Skylight interface elements, because until you do, you'll feel as though someone's thrown a roadblock into your workflow. Hopefully you've found this short orientation course helpful. Starting with the next Sonar column, we'll get into specific techniques.

There'll be a full review of Sonar X1 in a forthcoming issue of Sound On Sound.

I'm running out of words, so I'll keep this simple: ProChannel is great.

The EQ (four parametric bands with the upper/lower bands switchable to peak/notch or shelf response, high‑ and low‑pass filters and a 'Gloss' button for 'air') has a smooth, natural sound. The two dynamics processors are punchy and vaguely vintage, and the saturator has already made fast friends with several of my bass tracks. You can also change the order of the effects.