It's thermal underwear time as we look at the vagaries of track freezing in Live. 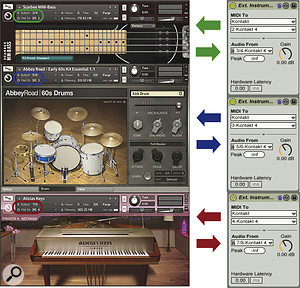 Three Live External Instrument plug‑ins send MIDI to and receive audio from different instruments in a Kontakt Multi‑instrument. The Kontakt plug‑in holding the Multi is on a separate Live track named 'Kontakt'.

We all know about the benefits of freezing virtual‑instrument tracks to save CPU resources, and in Ableton Live this took a big leap forward with the introduction of the External Instrument device in Live 7. Before that, if you wanted to freeze tracks for a multitimbral virtual instrument (VI) such as Kontakt or Stylus RMX, you had to instantiate a separate copy for each track, which defeats the purpose of the instruments being multitimbral. And although you could render their tracks, the convenience of freezing was not even available for Rewired or hardware instruments. So let's look at what you need to know about track freezing in Live.

In short, freezing a track temporarily renders all of its clips in both the Session and Arrangement views as 32‑bit audio files. Live then plays the audio clips rather than the instrument. This typically uses a lot less CPU power, and in the case of Rewire, lets you shut down the client application entirely.

Before the advent of the External Instrument function, Live used two tracks to manage the individual channels of a multitimbral VI (the individual instruments in a Kontakt Multi, for example): a MIDI track to send MIDI to the instrument, and an audio track to receive the instrument's output. Try to freeze the MIDI track and you'd get a rude reminder that it has no audio output to freeze. Try to freeze the audio track and you'd be forbidden because its Monitor switch is set to 'In'. Change that and you'd wind up with no input to freeze. You couldn't even freeze the track holding the VI plug‑in, because it had outputs routed to the aforementioned audio track.

These five tracks illustrate the Freeze process for Session and Arrangement view clips. The top track holds the virtual instrument (Kontakt in this instance). The second track holds a Live External Instrument plug‑in linked to the Kontakt instrument, receiving MIDI on port A[2] and returning its audio on stereo output 3/4. The track holds a frozen two‑bar MIDI clip, and the shaded region beyond the clip indicates the tail. The bottom three tracks show the audio results of freezing: from Session view (tail not captured), from Arrangement view (tail captured as a separate clip), and consolidated from Arrangement view (full selected length and converted to the project's bit depth).The External Instrument combines the functions of those two extra tracks on a single MIDI track: it routes MIDI to any VI in the Live song, any Rewire client, or any external port, and it receives audio back from them. Live then lets you freeze that track without interfering with the operation of the VI; you can even target the same instrument within the VI from other tracks after the External Instrument track is frozen. As we'll see, that comes in handy.

The setup for NI's Kontakt, shown here, is the same for all virtual instruments, although some of the details may vary:

1. Insert Kontakt on a MIDI track and load it with a few instruments.

2. Create an additional MIDI track for each of the instruments and insert one of Live's External Instrument plug‑ins on each of the new tracks.

I've left input A[1] and output Main unused because you can't access the Main output with an External Instrument, and it is convenient to leave A[1] and Main for auditioning instruments on the track holding Kontakt (which cannot be frozen). 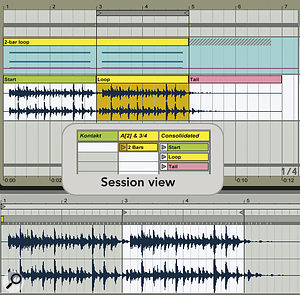 A two‑bar loop is stretched to four bars so as to include one repeat. After freezing, six bars are selected and copied to the audio track below — this includes the first loop, the second loop with spill‑over of the tail from the first loop, and the tail from the second loop. The inset shows the clips copied to Session view slots for manual triggering. The sample display at the bottom shows the Loop clip.

You can freeze an instrument track by selecting it and choosing Freeze Track from the Edit menu or from the track's context menu (by right‑clicking), but some preparation can speed things up and make the results more useful. When you freeze a track, all clips are frozen, and for a track with a lot of clips, that can take a while. If your goal is to use only a few of the clips on a track, deactivating the others (again, with the Edit or context menu) saves time because deactivated clips are not frozen.

When you want to freeze a clip to permanently add it as audio to your project, it's best to do it from the Arrangement view because that also captures any effects tail, such as from a reverb or delay. The tail is shown graphically as a shadowed section extending beyond the body of the clip. If you select a region including both the clip and the tail and drag or copy the region to an audio track you'll see two audio clips: one with '(Freeze)' appended to the name and one with '(Freeze tail)' appended. If you drag a frozen Session view clip to an audio track, you'll see that it is truncated at the end of the original clip.

If you drag a frozen clip into an audio track and look at the sample section of the its clip view, you'll see that it has the project's sampling rate, but 32‑bit resolution. The easiest way to convert it to the project's bit depth is to consolidate the clip. You can do this only in the Arrangement view by using the Edit or clip context menu or typing Command+J. Consolidating captures the whole of the selected time region, so you can easily create a single clip including the frozen tail and make it any length you like.

When I want to make a loop from the frozen audio (for example, when I plan to use it in a clip slot in Session view), I'll loop the original MIDI clip in the Arrangement and stretch it to include one repeat (two loops). The effects tail will then spill over into the beginning of the second loop: the first loop starts out dry, the second loop includes the tail from the first loop, and anything beyond the second loop becomes the final tail.

An alternative to deactivating clips you don't want to bother freezing is to make a copy of the track and delete the unwanted clips on the copy. I prefer this approach, and usually move all the clips I want to freeze to the Arrangement view and spread them far enough apart that all the tails will be captured. I then delete all the clips in Session view and freeze the track. Once I've consolidated the frozen clips on an audio track, I delete the copied track. That lets me switch easily between using the frozen audio and the original MIDI clips playing the VI. 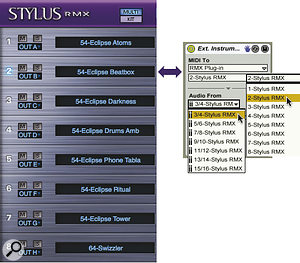 The Stylus RMX mixer channel receives MIDI on the MIDI port of the same number and sends its audio output to the output port shown in the left column. The External Instrument shown here sends MIDI to RMX channel 2 and receives audio from Out B, which is labelled '3/4‑Stylus RMX' in the External Instrument's 'Audio From' menu.

RMX's Browser, Time Designer and Chaos Designer windows all have Drag and Drop areas, from which you can drag MIDI clips directly to Live clip slots, and you can, of course, play or draw in your own. With the latter two, dragged clips maintain any groove and time effects.

Working with Rewire clients such as Propellerhead Reason and Record is similar to working with VI plug‑ins. You select the Rewire client for MIDI To, and, in the case of Reason or Record, you also select the target module by name — all the modules currently in the rack are listed. For the audio return you select one of the mono (64) or stereo (32) direct audio outputs in the Audio I/O module of the Hardware Interface. To access the output from individual devices, you need to cable them directly to the Audio I/O module in Reason or Record. 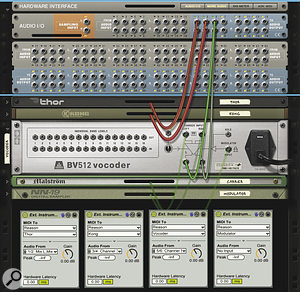 Three Reason devices—Thor, Kong, and the BV512 Vocoder—have their outputs cabled directly to Reason's audio output ports in the Audio I/O module at the top. Live's External Instruments route MIDI directly to the Reason devices and back from the audio output ports. Notice that for the vocoder, separate tracks are used to route MIDI to the devices wired to the vocoder's modulator (NN19 sampler) and carrier (Malström synth) inputs. Audio is returned to only the carrier track, but either track would do. For freezing to work in that setup, you need to simultaneously select and freeze both tracks. For VIs that are neither Rewire-compatible nor available as plug‑ins, you'll need to use the OS's MIDI and audio routing facilities, or third‑party utilities. On the Mac, those include the Audio MIDI Setup application's IAC buses for MIDI and audio routing utilities like Cycling '74 Soundflower configured in an Aggregate Device, both of which you configure in Audio MIDI setup. On the PC you'll need a MIDI routing utility like LoopBe1 (www.nerds.de).

You can save a lot of time by creating templates for multitimbral setups you use frequently. Insert the plug‑in on one MIDI track (skip this for Rewire and hardware setups) and create additional MIDI tracks for several External Instruments. Configure the External Devices as previously described, but without actually loading sounds into the VI. Collect all the MIDI tracks into a Live group, and drag the group to the Sets folder in the Live library. Now whenever you want a multitimbral setup, just drag the group into your Live song and configure the VI as needed. You may have to change a few External Instrument routings, but it's much simpler than starting from scratch.