As you can see, Markers can be used to delineate regions within Songs, such as intro, verse and chorus...

Markers have always been available in Logic, but the new Global Tracks feature, introduced in version 7, makes them much easier to use and manipulate than in earlier versions.

Markers can be really useful when you want to define parts of a Song, or for helping you to quickly move to different sections of your recording. They can be placed anywhere on the timeline, and each one can display text information. Using Markers can help make it easier to come back to work on a project after several months or even years, when you've probably forgotten what that horrible noise on track 12 was actually meant to be — in my case, it's usually my singing.

Markers can also contain much more detailed information.Markers on the Global Track can easily be resized by dragging their corners, moved by dragging the whole Marker or deleted by selecting the Marker and pressing the Delete key. The 'From Regions' button on the Marker Track probably isn't so useful for creating Markers unless you have a few specific Regions defining different parts of your Song. When I record a live band I usually split the recordings into various parts and give the Regions useful names like 'Verse One' and 'Chorus Two'. I then highlight these Regions and use the 'From Regions' button to quickly create useful Markers — names will be assigned automatically up from the Regions themselves (as in the screen on the previous page). If you double-click on a Marker the Marker text box will open — this is a fully functional notepad and you have complete control of font, size, type and colour. If you enter a line of text and press Return, the paragraph created will be displayed on a new line in the Marker Global Track (see screen below), which is really useful for making notes, especially if you have a large Global Track visible — just drag down the bottom line of the track to do this.

Once created, you can use the groups of Marker key commands, 'Goto Marker Number', 'Next Marker' and 'Last Marker' to easily navigate around the Song.

While you can still use the 'old' method of creating and manipulating Markers, the Global Track simplifies their use and gives you easier access to their features. Getting into the habit of peppering your Songs with Markers not only helps you navigate, but can be a useful reminder as to how things were when you last loaded them in. 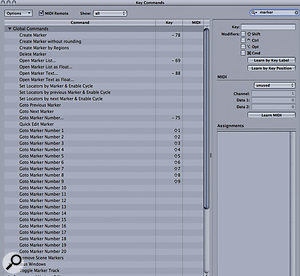 Logic offers a broad selection of Key Commands for managing your Markers.Here's a handy list of Global Marker Track Tools and shortcuts: 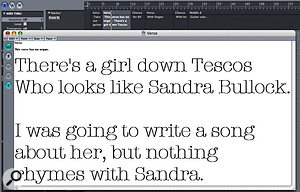 A Marker can also serve as the Logic equivalent of a notepad, since it's up to you to determine font and size. It can also function as an impromptu autocue for lyrics. If I had a penny for every time I've been asked 'Why, oh why doesn't Logic have a notepad?' I'd probably have just about enough money to buy a pencil and pad. The questioner usually goes on to ask 'Why can't I have somewhere to note down stuff like amp settings or guitar types or microphone positions or what the singer was wearing, which can then be reloaded along with the corresponding Logic Song?' The complainant usually concludes with a brisk 'I'm off to Cubase!' before I finally agree that Logic doesn't have a notepad — but that it has a lot of notepads! Every Marker you create in Logic is a notepad that can contain several hundred characters. You can choose the font type, size and text colour.

I usually have a Marker at the start of the Song containing overall information, such as who is playing what part and with what instrument, and other useful notes that I may need when I come back to the Song in the future. I also insert Markers when and where needed along the Song's timeline. If you open the Marker text window using the 'Open Text as Float Window' (Options menu / Marker sub-menu) and make sure the 'running man' icon is on, the text in the window will change as Logic plays past each Marker. I often use this feature, with really, really big text, to display lyrics as a Song plays.

Logic 7.2 has brought much improved hardware controller support. It's now much easier to see which physical control is adjusting which Logic function by using the Track Control Bar. This is displayed on the Arrange page and shows which tracks are being accessed by a control surface. You can have a different colour for each hardware controller you are using, so it's much easier to monitor what your surfaces are doing when you twiddle a knob. More 'named' external controllers are directly supported too — which makes the whole thing a lot more 'plug and play' than in the past. Personally, I prefer the combination of external hardware controller and mouse when working in Logic, so any enhancement in this area is a boon.

Despite these improvements, there's always room for some extra third-party software help when it comes to using hardware controllers. For example, if you are using a surface that supports the Logic/Mackie Control protocols, but doesn't have a physical display (such as the Behringer BCF2000), you can use John Pitcairn's LC Xview to emulate the display found on a 'real' Logic/Mackie Control. It's a fairly simple program that runs alongside Logic and you can use up to 32 instances, one for each hardware controller you have. You can download a demo or the full version for $20 from www.opuslocus.com.

I've recently finished shooting my first 'narrative' film after making a few music videos. Digital film-making is currently enjoying the same kind of revolution that music production did in the '90s, and it's now feasible to produce high-quality work just with a home computer and an affordable camcorder. The music videos were all done in Final Cut Pro, as the soundtracks were, by their nature, somewhat fixed. For this film, I'm using Logic in conjunction with Final Cut not just to produce the music — I won the commission to score my film, though the competition was tight — but for all the post-production of the speech tracks, spot effects and other audio editing work.

Once I'd edited the film in FCP, I exported the voice track and any backgrounds as an XML file and loaded it directly into Logic. I then used Logic's noise reduction to remove background hiss and noise, EQ to fatten up the rather thin sound captured by my recording microphone, a noise gate to remove the slight reverb picked up from the room and compression to increase voice intelligibility. I then mixed back in a small amount of pre-recorded room noise and some Space Designer reverbs to simulate the various recording spaces. The result was then mixed, exported and re-imported back into Final Cut. This has all worked beautifully and transformed my dialogue recordings into something that wouldn't sound out of place at a cinema. Next, I'll be using Logic to record the music alongside a Quicktime movie rough-cut of the film and importing the mixes into Final Cut to complete the sound edit. Doing this all myself has taught me several things: that being writer, director, cinematographer, editor, sound engineer and composer makes the usual task of being composer, recording engineer, mixer and mastering engineer seem like a walk in the park, and that Logic and Final Cut finally work together seamlessly after the problems manifest in earlier versions.