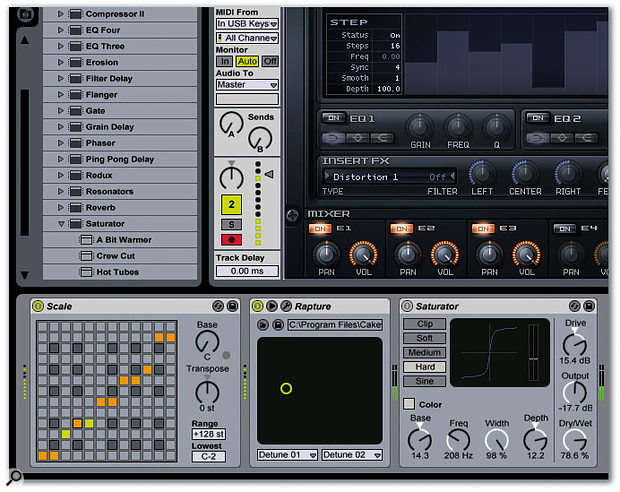 The MIDI track contains a Scale MIDI effects plug-in, an instance of Cakewalk's Rapture, and Live's Saturator audio plug-in at the output. The MIDI track's Monitor is set to Auto, so the track needs to be record-enabled in order to pass the incoming MIDI data through to the instrument.

When Ableton added MIDI support to Live, they also added virtual instrument support – this month we look at how to take full advantage of software synths within Live.

One of Live 's more appealing aspects is how it has managed to add increased functionality while retaining the simple, yet clever, operational paradigm that was its initial source of appeal. It's understandable that when Live 4 added MIDI, the ' Live faithful' were concerned the program would veer precariously in the direction of bloat. Instead, Ableton crafted a seamless MIDI implementation that added another dimension to the program, including virtual instruments.

However, Live's virtual instrument implementation requires an understanding of how signals are routed within Live, as well as the differences (and similarities) between MIDI, audio, and instrument tracks. We'll cover these topics, and more, in this issue's column.

Let's start by covering the simplest way to use a virtual instrument, then build on that foundation.

A virtual instrument requires a MIDI track, but once inserted, the track becomes a hybrid MIDI/audio track. Here's how the process works.

Set Monitor to Auto if the track is record-enabled. If it isn't, set monitor to 'In'. 'In' will also work in Auto mode, but if set to 'In', remember to return the Monitor function to Auto when you want to play back the track.

With an instrument inserted, the MIDI track accepts MIDI at its input, but outputs audio from the soft synth's audio output. As a result, you'll need to specify Audio To; usually this will be the Master Out. However, as we're now dealing with an audio track, the Master Out could also feed the Sends Only, or the input of another audio track.

Finally, play a few notes on your controller, and you should hear the soft synth play. If not, check the MIDI setup and the track input and output assignments.

More To The Track Than Meets The Ear

The MIDI track has a USB keyboard chosen as its input, and is sending the output to audio track one. The audio track is receiving its input from MIDI track two, and sending its audio to the Master out. As both tracks are recording simultaneously (Ctrl-click to enable multiple record buttons), both are record-enabled and Monitor is set to Auto.Also note that the configuration of the track itself changes automatically, depending on whether you're recording MIDI data or playing back the instrument sound. When the track is record-enabled, the meter shows incoming MIDI velocity. When it's set for playback, the meter changes into an audio output meter.

It's possible to simultaneously record the instrument output into an audio track as you record the MIDI data. Sound useless? Well, remember that Live is about being able to make decisions and changes on the fly, so consider this: You're using Live in a live performance, and building up loops over which you can play. You're playing a soft synth via MIDI, and then plan to switch over to another sound and play that. Of course, you can just record the sound of the soft synth into an audio track, and be done with it. But if you record into MIDI and audio simultaneously, you have the option of going with the audio track 'as is', or tweaking the MIDI track if there are problems, then recording this data through the instrument, which converts it into audio for the audio track. Once recorded as audio, you can move on to recording the next MIDI part.

Doing this takes advantage of Live 's flexible routing, which you can consider as a sort of 'matrix modulation without the matrix' as you can choose an input from any of several sources, and send an output to any of several destinations. 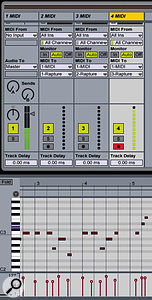 In case you're wondering why I used Cakewalk's Rapture in the first example, it's because it has the ' Live mentality'. Rapture has six different 'elements' (basically, voices) that offer lots of looping and tempo-sync options, and can be set up for multitimbral operation so that each element receives data over a separate MIDI channel. When loaded into Live, this allows a variety of MIDI-based looping options that complement the way Live treats digital audio.

Anyway, taking advantage of this requires setting up Live for a multitimbral synth. In this instance, the 'MIDI + instrument' track becomes a kind of container for the soft synth, and is fed by multiple MIDI tracks (one for each channel you want to address). As an example, we'll set up Live to play back three MIDI tracks into Rapture elements one, two, and three, which are set to those respective channels.

Create the MIDI instrument track, which we'll call track one. I generally set this to No Input to avoid confusion, as I want to add inputs only from other MIDI tracks and create as many MIDI tracks as there are multitimbral channels to be driven. In this case, there are three. Set the input for each of these MIDI tracks as desired.

In each MIDI track's upper MIDI To field, select the track containing the instrument (in this case, MIDI track one).

In the lower MIDI To field, assign the MIDI output to the desired instrument channel (in this case channels one, two, and three for the three element channels). Now set the Monitor switches for the three MIDI tracks to Auto. If you record-enable a track, it will send the incoming MIDI data to the channel that you have just selected, and of course, you'll also be able to record this into the sequencer.

Now you can record as desired into the various tracks, and play them all back when completed into the MIDI Instrument track.

What About Multiple Outputs?

Live can also accommodate instruments with multiple outputs. We'll use the Impulse drum machine as an example, as it comes with Live and is a cool little instrument anyway. In this scenario, we'll play the drum sounds from a MIDI controller, and send each Impulse sound to its own output for individual processing. Here are the steps required to accomplish this. 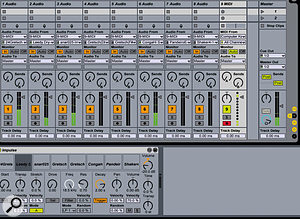 Impulse, the drum module included with Live, provides up to eight individual audio outputs (one for each drum sound). This screenshot shows channel nine feeding Impulse MIDI data, and each sound appearing over its own audio track.

Of course, when using instruments which have multiple outputs, you need to make sure that you've assigned sounds properly to output channels within the instrument itself.

A basic MIDI function is creating a split, so that a master controller can be divided into regions, with each region triggering a different sound. The stereotyped application is a bass sound played by the left hand and a lead sound with the right hand, but splits are good for special effects as well — high 'C' might trigger a special sample, for example.

Thanks to MIDI effects, Live allows setting up as many splits as you like. We'll use the example of splitting a keyboard so that playing C2 or below plays through one instrument, while playing C#2 or above plays through a different instrument.

The Pitch MIDI plug-in can be set up to create keyboard splits.Set up two MIDI tracks with the instruments that will play the two different sounds. Set each of their MIDI From fields to respond to your MIDI controller, or to the same MIDI data track.

Drag the Pitch MIDI effect from the Browser into the instrument that's intended to play C2 and below.

The Pitch effect passes notes in a certain range while rejecting all others. To edit it the way we want, set the Lowest parameter (the lowest note of the range) to C-2. Set Range to 48st, which means that the range will extend 48 semitones above C-2. This places the range's upper note at C2. Do not adjust the Pitch parameter itself — leave it at zero.

As we did before, drag the Pitch MIDI effect from the Browser into the instrument that's intended to play notes C#2 and above. Set the Lowest parameter to 'C#2'. For Range, as we want to play anything above C#2, we can just choose the maximum range of 127st. As before, leave the Pitch parameter at zero.

And now we have a keyboard split. Note that the Pitch plug-in has a small light below the Pitch control that glows yellow when the plug-in is receiving a note outside of its specified range. This is very thoughtful, because if you don't hear anything, you can check here first and make sure the problem isn't just that you're playing out of the specified range.

Layering two (or more) synths so that they play together is easy. All you need do is to have the two MIDI instrument tracks monitor the same MIDI data track at their inputs. And as expected, you can combine splits and layers by simply creating an overlapping range with the Pitch plug-in. For example, you could place the highest note of the lower split above the lowest note of the upper split, thus creating a range where the two sounds overlap.

If you're still using Live strictly as a digital audio-oriented machine, that's all well and good — but you're missing out on a lot. Start by exploring the Impulse and Simpler instruments included with Live; you might be surprised at how getting MIDI instruments involved can expand your musical horizons.