What Does Logic v7.1 Offer?

After months of speculation Apple have finally announced the release of the first major Logic 7 upgrade, but what can users expect from version 7.1?

At the National Association of Music Merchants (NAMM) in January 2005, current Apple Director Of Audio Applications (and ex-Emagic boss) Gerhard Lengeling broke all the usual company guidelines regarding future product releases and announced the features of an upcoming version of Logic. This was very unexpected, as Apple policy is only to make product announcements 30 days before they actually become available. No shipping date was given, only a list of new features. Of course, the main interest was the announcement of full PDC or Plug-in Delay Compensation. Versions 5.x to 7.0.1 of the program already compensate for the delay caused by inserting Logic's own plug-ins on tracks, busses and auxes. However, delay compensation for third-party Audio Units (AU) has been for tracks only. Full PDC would remedy this situation.

There had been an outcry at the release of version 7 when it was discovered that full PDC was not amongst its new features. Some had seen the unusual NAMM announcement as a cynical ploy to shut up complaining detractors by promising this much-anticipated feature in an unspecified future update. There's been a lot of rumour that PDC would be integrated into the Core Audio aspect of Tiger, the new version of OS X, due sometime in the Spring and that a version of Logic able to make use of full PDC would follow shortly afterwards. Dr Lengeling also announced that there would be a 'small fee' for this upgrade, as it was to be supplied on CD or DVD — much to the annoyance of those who had just bought the latest version of Logic.

Just to prove that speculation can be futile, Apple have released version 7.1 of Logic, with full PDC and a plethora of other features, well before Tiger's release. There is a cost, but at £13.99 I think that most Logic users will be able to stomach it. Version 7.1 includes two 'hybrid' synthesizers, a bass amplifier emulator plug-in, the ability to drag plug-ins around directly in the channel strip, drag and drop for Ultrabeat and the EXS24, a brace of new Key Commands, improved import and export and several other improvements and bug fixes. Any audio recorded into Logic can now be time- and pitch-shifted directly in the Arrange page in an Ableton Live-like fashion. The update also includes a new version of the Waveburner CD authoring and mastering program — something hotly anticipated after the insipid release that was shipped, unannounced, with Logic 7. There's also a version of Logic Express v7.1 available with fewer features but full PDC. It really does look as if Apple has listened to all those complaints and feedback — Logic v7.1 looks like it might be the sequencer many expected v7.0 to be. I'll be bringing a full mini-report when my copy arrives.

Logic 7 brought with it a slew of bugs and omissions. For example, the Key Command to open the 'hidden' automation track (so data can be edited in the Event list) is missing, as is the Catch On Start preference. The latter is particularly annoying, as it will cause Logic to start playing back a Song as soon as it's loaded — not something you want to happen in a live situation! These problems can be remedied if you have an earlier version of Logic for OS X installed on your Mac. If you open the old version, set the 'catch on start' preference to 'off' and set up a Key Command for the automation track, these parameters will be saved in the Logic Preferences file. When you run Logic 7, the Key Command will still work and Logic won't start to play the Song before you've introduced it! It remains to be seen if version 7.1 has corrected these bugs. 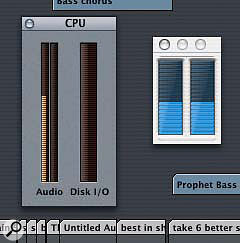 The Logic and System CPU monitors — spot the difference! If you have a dual-processor Mac and open the CPU monitor, you'll often find that Logic seems only to be using the first processor when playing back a song with many plug-ins. This will often cause the program to throw up a Core Audio error message.

If you open the OS X CPU-monitor program (located in /Applications/Utilities/Activity Monitor), you'll see that the operating system itself is actually balancing out processor usage evenly — even though Logic thinks it isn't!

You can solve this problem by starting playback, stopping and starting again. You'll see that both CPUs are reported as being used equally in Logic now. You can also force Logic to load the second CPU with a processor-intensive plug-in by selecting the track it's on when playing back the song.