Announcements in the touchscreen world of Windows 8-compatible products hint at competition for the iPad. 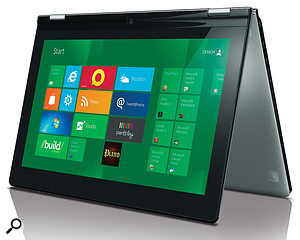 Windows 8-based tablets and convertible PCs are on the way, according to leading manufacturers.

This month, there doesn't seem to be much radical news for PC users. Intel's Ivy Bridge processors continue to get plenty of column inches elsewhere, most of them tying in with the conclusions I reached in last month's PC Notes column: that they're a good purchase for a new machine, because of their incremental performance and cooling improvements, but not worth the extra outlay if you've already got a Sandy Bridge. Most specialist audio PC builders seem to have adopted Ivy Bridge for these reasons, and should be able to offer such machines at similar, if not identical, prices to their Sandy Bridge predecessors.

Windows 8 information continues to dribble forth, and I've even seen a 'Get the Best Out Of Windows 8' guide in my local newsagent, even though Windows 8 itself still won't be released until October. Manufacturers such as Hewlett Packard are announcing their intentions to release Windows 8 tablets later on this year, and the general consensus is that tablets and convertibles (laptops that double as tablets with the keyboard folded out of the way) will start arriving in shops by November. This reinforces my view that we'll finally get some decent cross-platform competition to the ubiquitous iPad. Panasonic have also managed to shoehorn Ultrabook parts into a netbook-sized case (albeit at a premium price point), which further blurs the format boundaries. 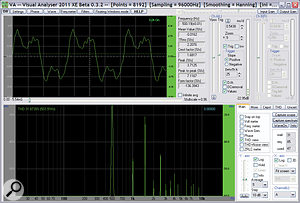 Free to Windows users, the stunning Visual Analyzer turns your PC and soundcard into a complete suite of audio measurement instruments that look every bit as good as a hardware display.

Lots of SOS readers frequent our DIY forums, some build their own guitar stomp-boxes and even rack effect units, but few can justify buying a hardware scope/analyser just for occasional testing and fault-finding. Back in PC Notes April 2012, I mentioned the excellent J-Scope donationware plug-in (www.jaggedplanet.com/VST/jscope.html), which is perfect for learning more about your synth waveforms and envelopes. I dropped its DLL file into my VST plug-ins folder and deleted the other scope plug-ins in my collection, because this one did so much more.

Well, as luck would have it, I've since discovered the wonderful donationware Visual Analyzer (www.sillanumsoft.org), which even puts J-Scope in the shade. This stand-alone Windows application runs on Windows 9x, ME, 2000, XP, NT, Server, Vista and 7, turning your PC and its audio interface into an entire suite of measuring instruments, including an oscilloscope, spectrum analyser, waveform generator, frequency meter, AC Volt-meter and even a THD (Total Harmonic Distortion) meter.

Italian PhD student Alfredo Accattatis (of the University of Rome) set out to write a program specifically for audio circuit analysis for the electronics hobbyist, and anyone who's ever used hardware scopes or analysers should immediately feel at home. He's now been working on his Visual Analyzer project for five years, adding sophisticated features including band-limited waveform generation, to avoid aliasing problems with frequencies beyond your sample-rate cutoff, and D/A waveform reconstruction, so that frequencies above a few kilohertz appear as perfect waveforms instead of a few jagged joined-up lines due to sample-rate limitations.

The AC Volt-meter is also a godsend for fault finding. You calibrate it once, using a multimeter and a sine-wave test signal, and from then on you get a true RMS readout from Visual Analyzer, whatever waveform you're exploring. Even better, the THD readout is perfect for indicating the onset of clipping or investigating the effects of tube/tape hardware and plug-ins. This is a massively useful program if you want to find out more about synth/effect waveforms and harmonics, or even dabble in circuit design.

Internet security is still an issue for most of us who have our studio PCs online, but fortunately Microsoft's own Security Essentials is free, available for Windows XP Service Pack 2 and higher, Vista and Windows 7 in both 32-bit and 64-bit versions, and is good enough for most of us (http://windows.microsoft.com/en-US/windows/products/security-essentials). However, if you want the reassurance of a double check now and again with a different package, in case your main one has missed anything, there are now some good free ones that you can use on demand. In the past I've occasionally run the somewhat basic, slow yet thorough Clamwin (www.clamwin.com), and more recently I've been impressed with the ESET Online Scanner (www.eset.com/us/online-scanner). However, if you want an alternative to MSE that blocks both viruses and spyware, provides real-time protection, and seems to offer an excellent detection rate, try Avast Free Antivirus (www.avast.com/en-gb/free-antivirus-download). More sophisticated versions are available that add extra Firewall and Sandbox protection, but the free one should prove quite sufficient.