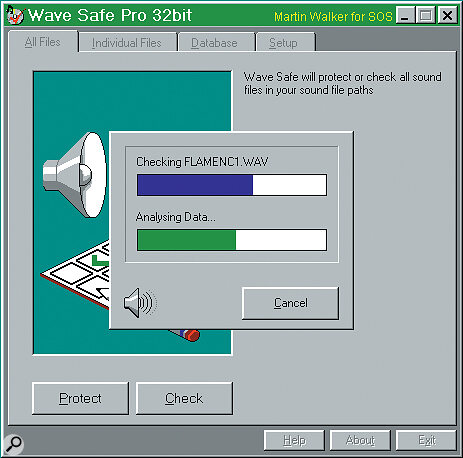 Better Wave Safe than sorry! Having protected an album's worth of files, you can check their integrity at any time to see that every file is still perfectly intact.

Just when most of us have finally optimised Windows 95 for hard disk recording, Microsoft release the Beta version of Windows 98. Martin Walker sticks his head in the sand.

Many of you will have seen the rumblings about the Windows 98 operating system in the computer press; sadly, the overwhelming opinion is that it will offer very few carrots to encourage huge numbers of people to upgrade (although that won't stop people doing it). Although the Beta version has been widely circulated, I would advise you to stay well clear of it, and at least waitfor the official release, currently destined for mid‑1998. Windows 98 is aimed at consumer rather than business users, and the new features tend to reflect this. Since it is likely to be pre‑installed on all PCs sold from the second half of 1998, it is inevitable that most people will upgrade eventually, so let's look at what it has to offer.

Dave Brown's Freeware plug‑ins for PC Cubase VST are a cheerful reminder that the home‑ enthusiast programmer is not dead.

The biggest change is that Internet Explorer, which many of you may already be using to browse the net, will be firmly integrated into the desktop. Internet Explorer 4 (the version to be included as part of Windows 98) is already falling off those PC magazine freebie CD‑ROMs, and I know several people who have installed it quite happily, as long as they avoid any temptations to also install its full Active Desktop features. These turn your desktop into an extension of the World Wide Web — your desktop shortcuts, files and folders all become underlined hyperlinks, requiring just a single click to activate, and individual folders are viewed like web pages, with even a choice of background graphics. In essence, Windows Explorer and Internet Explorer become merged into a single entity. However, overall performance is reported to be bogged down, and the integrated browser 'shell' means that if you crash while on the net, your PC may need completely rebooting. These features are largely cosmetic, but it is possible to disable them (if you look hard enough). Incidentally, if, like me, you prefer Netscape's Navigator for web browsing, you're going to have to consider changing over to Explorer, since it's almost impossible to totally disable Microsoft's browser once it's installed as part of Windows 98.

Some of the other 'new' features of Windows 98 are also available elsewhere, either through service releases, or the later OSR2 version of Windows 95, which has shipped with most new PCs for the last year or so. The FAT32 format for hard disk storage becomes an integral part of Windows 98, and this allows you to forget about the 2Gb limit imposed on hard drive partitions, and is more efficient when storing small files, due to its smaller cluster size (the minimum pigeonhole available for file storage — see September's 'Driving It Home' feature, on installing a new hard drive, for more details). However, it also slows file access down slightly — I have received reports from several readers that the maximum number of HD recording tracks, as reported by Event's excellent Echo Reporter utility, altered significantly after changing to FAT32. This is likely to be because although it's more efficient in terms of using space, the File Allocation Table (FAT) becomes much larger in the process, which gives a slightly greater overhead when accessing files.

Looking at the more positive aspects of Windows 98, multiple screen support is finally with us (Mac owners have had this for years). Imagine being able to run your sequencer on one monitor and have your synth editor on another screen alongside, or running Soundscape and Cubase VST and being able to see both at once, or splitting a single huge window across two screens. All these things are now possible. You'll need a separate graphics card for each monitor to do it, but these are now very cheap. Up to eight monitors will be supported, and they can function as a single large desktop — you can drag things directly from one monitor to another using the mouse.

USB (Universal Serial bus) and Firewire support (much mentioned in these pages) will also be provided by Windows 98, so peripherals might finally start to appear, to halt the current 'chicken‑and‑egg' situation. To help people over the initial hurdles, a host of new wizards are being provided, such as the Tune‑Up Wizard, which examines your hardware settings looking for bottlenecks. The Update Wizard will allow registered Windows 98 users to automate downloading of the latest files and drivers from the Microsoft site. However, as all PC musicians already know, the settings that optimise our PCs for hard disk recording have very different settings from those of other users. 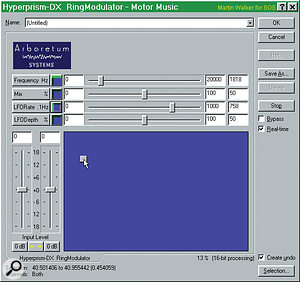 The Hyperprism‑DX Blue Screen provides draggable 'joystick' control of any parameters in this plug‑in suite.

Installing a completely new operating system is never something that should be taken lightly, certainly not until other software developers have had a chance to check compatibility with existing applications, and to write patches, if necessary, to ensure reliable operation — after all, it's nice to have the latest bells and whistles, but not if your favourite sequencer crashes every time you try to run it. I suppose I'm a cautious sort of person, partly because, having developed software myself, I know that there is no such thing as a 100% debugged program — there are always obscure combinations of hardware and software that may require patches to be released. At the risk of putting you off completely, I must also point out that uninstalling Windows 98 to return to Windows 95 is an unlikely option. If you decide that you prefer what you had previously, apparently the only course is to completely re‑format your hard drive, and then re‑install Windows 95 from scratch.

You've probably got the impression that I'm not very enthusiastic about the prospect of installing Windows 98. Well, you'd be right, and the reason is that I now use my PC on a day‑to‑day basis, both for music, and when writing for SOS. When I upgraded to Windows 95, I did it against the advice of my local dealer, who carried on installing the (by then) well‑debugged Windows 3.1. Now that the health of my PC can affect my livelihood, I am beginning to side with the dealer. Yes, I'm fascinated to see what bells and whistles Microsoft have for our delight, but musicians, sadly, are a tiny minority of PC users, and if performance suffers after the upgrade we'll be a tiny voice crying in the wilderness. I can imagine the size of the potential SOS mailbag following the official launch of Windows 98, and it gives me a case of the shudders — I expect that some of the patient souls who sit at the other end of the manufacturers' helplines are starting to have sleepless nights as well. Excuse me while I go and lie down for a few minutes.

Having cast a pall of doom and gloom over the proceedings, I'm delighted to restore harmony and balance by mentioning a product specifically designed to protect your musical data. Wave Safe, from Calistan Solutions, is a sound file protection application which claims to "actively monitor the integrity of audio data and protect sound files from corruption". Wave Safe is designed to enable you to salvage your audio data despite chewed DAT tapes, power cuts and surges, ageing floppy disks, or scratched CD‑R and CD‑ROM disks. Bold claims indeed! It does this by building a database from your files, and comparing this information as and when you next retrieve the files. If there are any problems, an advanced set of 'fixing algorithms' can re‑build audio waveforms.

Although it initially sounds like an advanced form of de‑clicking software from this description, Wave Safe does not 'guess' at missing or corrupted sections, but deals with much more fundamental problems. Even a single corrupted byte in a WAV file can result in the data not loading at all. With computer data, this hard‑nosed approach is a must, since allowing corrupted bytes to be loaded could crash your PC in a microsecond. However, audio data is much more forgiving, and by 'protecting' your data, by analysing it when in tip‑top condition, Wave Safe can re‑build the majority of files using its Salvage function, even if there are a few corrupted sections. If you've ever faced the nightmare scenario of trying to load a WAV file that has been corrupted in some way, you'll find Wave Safe a blessing, although it shouldn't be used instead of a regular backup regime.

A fully functional Shareware version is available for download from the Calistan Website at www.calistan.demon.co.uk/, and this provides a generous allowance of protection sessions. The Registered version allows unlimited use, and the Pro version also allows you (amongst other things) to attempt to rescue files from damaged CD‑Rs, hard drives or floppy disks. Playing around with some of the demo WAV files makes you realise just what a potential time bomb we're all sitting on. I hope to have a more extensive review of this intriguing utility in due course.

As mentioned in this month's news, there's an update to the PC version of Cubase VST now available from the www.steinberg.net/ web site. The patch files will update versions 3.50 and 3.501 of Cubase VST, Cubase Score VST and Cubase Audio VST/XT to Version 3.502, although since the update comes in at 2.8Mb you'll need a reasonably fast modem if you want to keep your phone bill down. A few people have been previously unable to use the Cubase 'Save As' option, and this is now cured, but, ironically, the other reason for this update is to cure crashes when launching any DMSS plug‑in if you have installed Microsoft's Internet Explorer 4.0. Now what was I saying about installing the latest software? (See main text.)

An independent site for Windows Cubase users can also be found at www.instanet.com/~thedusk/, and this has an updates section which is a lot easier to navigate than the Steinberg one. Finally, if you fancy jazzing up your VST backgrounds and are running your screen at 24‑bit resolution, Pekka Saarinen's Home Page features downloadable textures for Cubase VST (www.sci.fi/~contacts/vst_texture.... Very nice they look too!

Also spotted whilst browsing the Steinberg web site was a pair of Freeware plug‑ins for PC Cubase VST, written by one Dave Brown, which can be downloaded from www.dbrown.force9.co.uk/. Dave, a software engineer for Hewlett Packard, has written the plug‑ins in his own time, as "a few simple toys to keep the VST user on a budget happy." The total download size is only 74kb. If there were a few more people like this out there, the world would be a happier place. Thanks Dave! See this month's news pages (the 'Plug‑in Corner' item) for full details of the two plug‑ins.

Finally, such is the rate of development with DirectX plug‑ins that, two days after uploading this month's PC Musician feature, I discovered yet another Mac developer with a PC product shipping. Arboretum's new Hyperprism‑DX features a suite of a couple of dozen effects, including a host of reverbs and delays, echoes, filters, phasing, and flanging, plus some more unusual ones such as ring modulation. You can download a free demo version of several of the effects from www.arboretum.com.