Where To Use Processors & Why: Part 5

Delay, originally called echo, is one of the oldest artificial effects, yet it can still be one of the most impressive — if used with care. Paul White explains the potential problems and how to avoid them.

Delay, in its analogue tape guise, was one of the earliest special effects to be used in audio recording, often to add interest to guitar or vocal sounds. With modern digital delays we have much more control over decay time and tap (repeat) spacing than with tape delay, not to mention a much better frequency response and a lower noise floor. However, as regular readers of this series will appreciate, even the best effects can detract from a recording if they're not used very carefully, and digital delay is easy to misuse.

Most of us know what a delay unit does, but what exactly is a delay in musical terms? A delay device repeats the original sound one or more times, so the musical outcome is to add more notes to the performance, at time positions later than the original. This highlights a potential problem right away — if you have a very pronounced delay and the delay time doesn't fit in with the tempo of the music, the delay may upset the musical timing of the piece. If the piece has a fixed tempo it's easy enough to calculate the delay time needed to get the repeats to fall on the beat (for example, if you're working at 120bpm you need 60/120 or half a second), and you can double up or halve the delay time without going out of time with the song. Even so, you can still run into trouble, because now the delayed note might clash musically with the new note it coincides with.

Part of the problem is that digital delays produce almost perfect copies of the original sound, whereas tape delays had a spectacularly poor frequency response which made the delays seem more like natural echoes. We're in the realms of psychoacoustics here — if the delay is quieter and duller‑sounding than the original, we accept it as an echo, but if it's equally loud and just as bright, it's simply a note in the wrong place. Echoes that occur in nature get duller every time they reflect from a new surface, so to get the same result from an electronic delay line we need to try to emulate this. Simply feeding the delay return back through a mixer channel with the top rolled off doesn't produce exactly the same effect, because every delay will be equalised in exactly the same way, but it's still a lot better than nothing. However, to really do the job properly, the EQ needs to come after the delay line, but before the feedback path used to create multiple repeats. Some of the better multi‑effects units provide a delay damping parameter to simulate this, but there is a dodge you can try if you're using a very basic DDL (Digital Delay Line). See the 'Delayed Gratification' box for details.

If a delay is quieter and duller‑sounding than the original, we accept it as an echo, but if it's equally loud and bright, it's simply a note in the wrong place. 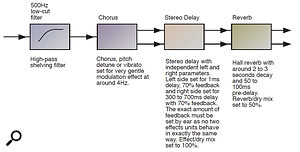 Multitap delays are useful in situations where you don't want to be forced to make the delay time match the tempo of the song. If you time the various delay taps so that they are not exact multiples of each other, the delay pattern should be complex enough that the listener's brain gives up on trying to match it to the tempo of the music. (For a good example of this, listen to the echo used on '60s instrumental guitar music. The echo gave the guitars a big sound, but there was enough apparent randomness in the effect not to upset the listener's perception of the tune's timing.) Feeding the output of all the delay taps back into the DDL input causes the repeat pattern to rapidly build in complexity as it decays, rather like a very coarse reverb effect. By the same token, if you need to create a multitap delay that reinforces the tempo of a piece of music, all the tap times must be multiples of the tempo — though, of course, you could set some taps to straight time (quarter‑notes, eighth‑notes and 16th‑notes) and others to triplet time.

What happens if your song contains tempo changes? Obviously, if you have a fixed delay time this will throw out the synchronism between the delays and the music, but if you're using a programmable effects unit you can create a new patch at the new tempo and switch to this, either manually or via MIDI, at the appropriate time. Unfortunately, many effects units fail to change patches smoothly, so how well this works depends a lot on the make and model of your effects unit. Ironically, the cheaper ones often change patches more quickly than the expensive ones, as they're running less complex algorithms.

A much nicer way to tackle the sync problem is to use one of the increasing number of effects units that allow you to sync delays, LFOs, and so on, to incoming MIDI clock. Providing you have a sequencer running, you can force the delay timing to precisely match any tempo changes you might make.

Too Pure For Comfort? 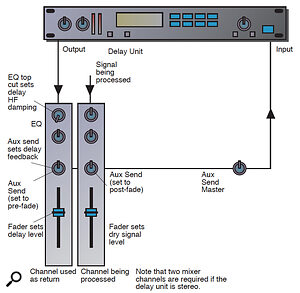 Those old tape delays had terrible technical specs, but they still produced a wonderfully warm sound, and their limited bandwidth was only one of the reasons. Another reason was the rather poor stability of the tape transport — musicians would leave their echo units in the band's van for days, with the rubber pinch‑roller pressing against the capstan all the time. Often this would create flat areas on the pinch‑roller, and the result was slight speed unevenness in the transport — so instead of producing super‑clean repeats, the tape delay unit would apply a tiny amount of vibrato to them, pretty much by accident. You can simulate this sound with a multi‑effects unit by placing a chorus or vibrato block before your DDL, but keep the effect very subtle, otherwise the 'chorusing' will be too obvious.

In a real tape echo, every time a repeat is fed back and re‑recorded, more vibrato is added, making each repeat messier than than the one that went before. To emulate this exactly using a digital DDL, you'd need to put the chorus effect between the feedback loop and the delay line input, but many algorithms don't permit you to do this. That being the case, just a little chorus before the DDL will get you close enough.

In real life, there's no such thing as a clean echo — each echo will have some ambience because of the multiple reflection paths the original sound creates. To emulate this electronically, we need to add a hint of reverb to each echo. The easiest way to do this is to place a reverb block after the delay block. You don't necessarily need a very long reverb to make this technique work, but as a special effect a reverb of up to three or four seconds can sound quite spectacular. By varying the reverb mix parameter, you can adjust the balance of clean delays against reverbed delays, and in music that is sparse enough to let you appreciate these subtleties, the added sense of space can be very worthwhile.

Yet another complication when using delays is that, when there's a lot going on in a given piece of music, delays can just clutter up the sound, yet in a less busy section the echoes may not be dominant enough. One answer to this is to use ducking delay — a delay that drops in level when there's a strong signal, and comes back up in level during pauses or quiet passages. You can achieve this by setting up a compressor or gate in ducking mode, then feeding the delay unit through the ducker, triggering the ducker from the dry signal. [If you don't know how to set up a compressor as a ducker, take a look at the article on using compressors that we ran in the April 1997 issue of SOS. This features a box and diagram to explain how it's done — Production Ed.] These days an increasing number of effects units now include ducking delay and reverb as standard, and having the solution already inside your effects unit makes life a lot easier and saves patching. It also means that you don't have to tie up a gate or compressor that might be better used elsewhere in the mix.

I seem to have got to the end of this month's instalment, but the bottom of the page is still some way off — so to avoid leaving a long and embarrassing expanse of white paper, I'd like to share with you one of my favourite effects patches, which relies on some of the principles discussed so far. This is an interesting delay‑based multi‑effect that can be used to create a sense of space and distance, without making the mix muddy. It works best on percussive musical sounds such as piano or acoustic guitar samples, though it also suits electric guitar pretty well. The block diagram is shown in Figure 2, but I'll talk you through it anyway.

Next month, it's the turn of valves to come under the hammer. Will they stand up to it?

If you're using a simple delay line and you want to simulate delay damping (see 'Musical Delays' section in main text), instead of bringing the DDL output back into an effects return point on the mixer, bring it back into a spare channel and roll off the appropriate amount of top. Now, rather than using the feedback within the DDL to create multiple echoes, turn the feedback off completely and instead use the aux send control on the channel you're using as the delay return. For example, if your DDL unit is being fed from Aux send 1, use the aux 1 control on the channel you've chosen as a return to feed some of the signal back to the DDL input. This setup is illustrated in Figure 1. Every time the signal is fed around the loop, it will pass through the channel EQ again, so each repeat should be slightly duller than the last. The return channel fader is used to control the overall effects level in the usual way.

Note that if the aux send on your return channel is set to post‑fade, as effects sends usually are, the amount of feedback will change as the effect return level is adjusted — which is not ideal. A better option is to use an aux send that is switchable for either pre‑ or post‑fade operation so that you can use it in post‑fade mode on the channels carrying your mix, but set it to pre‑fade on the channel that's handling the effect return. This way the effect won't change as you alter its level (this should all make more sense if you look at the diagram on the right). It's also important not to make the echoes too loud in the mix, or the brain will no longer accept them as natural. Where a stereo effects unit is being used, two mixer channels will be needed as returns.